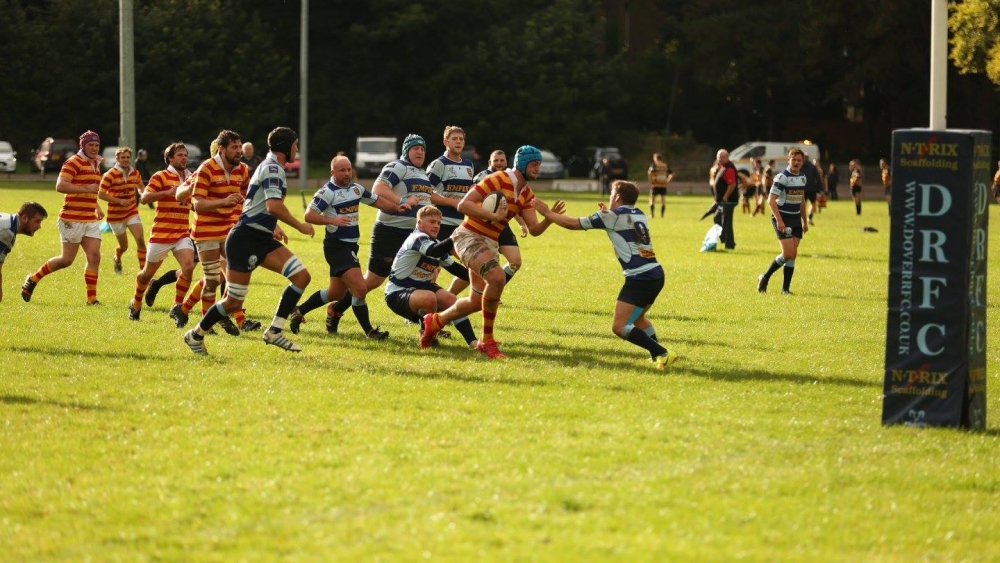 Chobham sponsored by ‘Basalt Global’ made the long trip to the Kent coast in need of a victory against winless Dover. Euan Buckland and Oli Wakefield returned to the starting line-up and with skipper Tony Paul unavailable the backline was reshuffled with Lawrence Elliot starting and Owen Glover coming back into the match day squad after a 2 week absence alongside replacement prop James Evans. With the showers giving way to blue skies Chobham had first use of the slope and again needed this advantage to reflect in the score board come half time. Chob made the early running looking business like and determined and were soon making dents in the home defence. A Liam Monaghan kick chase looked promising and the Chobham scrum started to gain the early upper hand as Dover battled hard to keep the scores level. With pressure mounting in the home 22 it was only the visitor’s inaccuracies that prevented a score with several promising positions not exploited allowing Dover to clear their lines with some relieving touch finders.

On 20 minutes, a penalty from Alec Thomson hit the post causing confusion in the home ranks and from a strong 5 metre scrum the ball was shipped to centre Jayde Cruickshank who crashed over under the sticks to open the scoring. Thomson added the extras. Another penalty was dragged wide shortly after and the pattern of the remainder of the half was Chob well on top particularly at scrum time, but a lack of precision across the team meant that the final pass was not made to count. Half time; Dover 0 Chobham 7. With a yellow card for Dover on the stroke of half time reducing them to 14, home second row Blowers joined his team mate Annakie in the bin on 42 minutes for another indiscretion in the red zone. From the resulting penalty, a driven line out saw prop James Evans come up trumps and although the conversion was missed, Chob took advantage again on 45 minutes as that man Evans found himself on the end of some excellent team play to secure his brace. Again no extras.

In the course of the score, home wing Kurt Jagger saw yellow meaning that for a few minutes Dover were down to 12. In fact with 13 on the park as Annakie returned, Dover then had their best spell of the game as a very effective piece of “keep ball” drew successive penalties which fly half Greg Philips confidently knocked over to reduce the deficit. With numbers now even Chob pushed on for the bonus point and a deft grubber by man of the match Ian Barnes was smoothly collected by Owen Glover and the fourth try was in the bag. No extras. Full time Dove 6 Chobham 22. With 12 points left on the tee and several promising opportunities spurned, the score line flattered Dover and obscured a better performance from Chob than in recent weeks. Head coach Ryan Gregory will again be pleased with the defensive performance which kept the try line intact and also the power in the scrum and the team generally looked to grow in confidence as the game went on. Better accuracy and execution will be the watch word for training before another tough away fixture next week at high flying Sidcup.