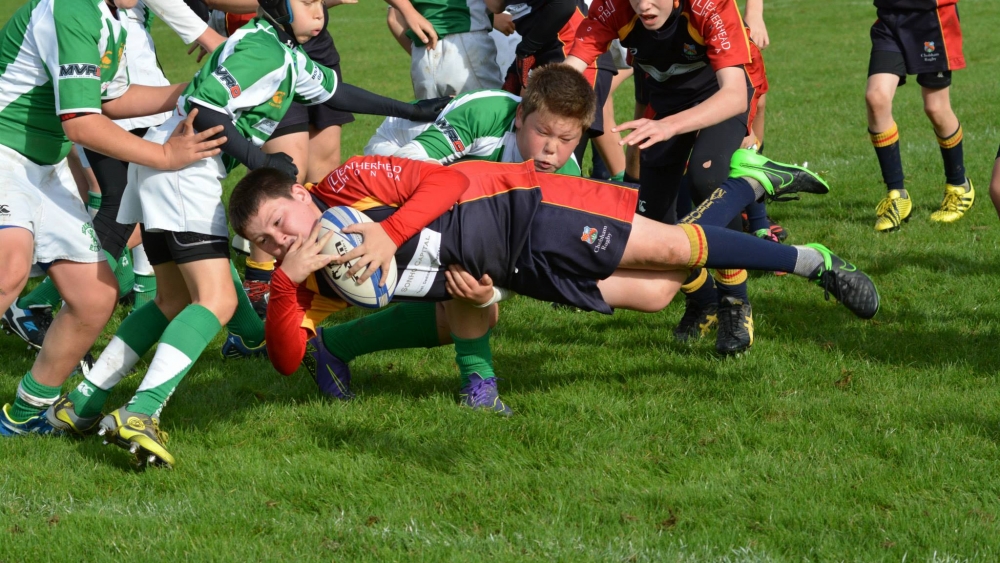 Match Report from Doug Mayger: Chobham Under 13s returned to Sussex on Sunday for both A and B fixtures against Horsham. With the fixture at half-term Chobham travelled with just enough players for two teams who would play alternate 25 minute periods.

Kicking off up the hill in the first period Chobham A were defending in the opening minutes and under pressure at the scrum. Horsham stole a scrum against the head and were able to go through several phases maintaining possession. Eventually the ball reached the Horsham winger who was able to go round the edge of the Chobham defence to touch down in the corner for an early 5-0 lead. As has been the pattern in most games this season so far the defences were able to match any attacking intent on show. Horsham were held on the line following a quick lineout, and then Chobham stole the Horsham throw and were able to clear to safety. Then it was Chobham’s chance to launch a first meaningful drive. Max made a half break to draw a penalty. This was quickly taken by Oli with the rest of the pack in support with the break continuing down the short channel. Horsham however were able to regroup and halt the attack a few yards short.

For the remainder of the first period Horsham looked to move the ball quickly whenever possible and Chobham had to be alert from 1 to 15 across the park with only one chance to attack up the hill which Horsham were able to contain. The second match kicked off with Chobham B playing down the hill against a Horsham side sporting a sprinkling of players from the first game.

Andrew and TommyW made early inroads into the Horsham half, using the slope to good advantage but Chobham couldn’t breach the final line of defence. Horsham in contrast were able work the ball wide from a tap penalty and use the pace of the fullback to score in similar fashion to the first half but this time being able to touch down behind the posts for a 7-0 lead. Chobham were soon defending stoutly again with Marcus to the fore with several tackles. A Chobham scrum near their own line held firm and Samuel was able to kick for touch well down the line. The two sides probed for an opening without breaking through until TomM was injured and was replaced by Finn who was straight into the action bringing down the biggest boy in Horsham green. Sadly Horsham were able to retain possession and score a second try wide out to make the half-time score 12-0.

The teams swapped again with Chobham A now with the slope advantage. Danny used this slope with a well-placed cross kick for Adam to gather on a couple of occasions but the rest of the team weren’t able to support and develop a real scoring chance. Horsham made it 12-0 from a tap penalty creating the opening for the fullback to score his third try across both games and HarryC put his body on the line to prevent a third try straight from the restart having to come off injured in the process.

Slowly but surely Chobham started to gain the upper hand as they tried to claw their way back the best chance going to Adam who did his best Billy Whizz impression being hauled down ten yards out. The Horsham clearance was dived on by Doug but a nasty challenge from the Horsham player led to both players being subbed, one injured, one to ‘take a breather’. Sensing perhaps that Horsham were rattled the Chobham attacks came with more bite bringing a number of penalties for high tackles. From one of these a simple passing move down the line brought the opening Chob try as Adam was able to score in the right hand corner from where the con version was missed.

With a couple of minutes left Chobham continued to attack forcing Horsham to concede more penalties. Another forward charge was held up just short of the line but from the resulting maul Dan was able to dive for the line and reach the whitewash in the left corner, to bring the score to 12-10. With this the last play of the game this was the final score as again the conversion fell short. To the final period of play then, with Chobham now playing uphill. After a brief Horsham attack was halted by a high hand-off Chobham moved up field under the posts. Recycled ball went left and Callum opened the Chobham account with Samuel adding the extras to make the score 12-7.

This however brought a swift riposte from Horsham who used the slope and A players to good advantage, puncturing the defence in midfield to add several tries that swayed the scoreboard very much in their favour but didn’t do justice to the effort from the whole squad.