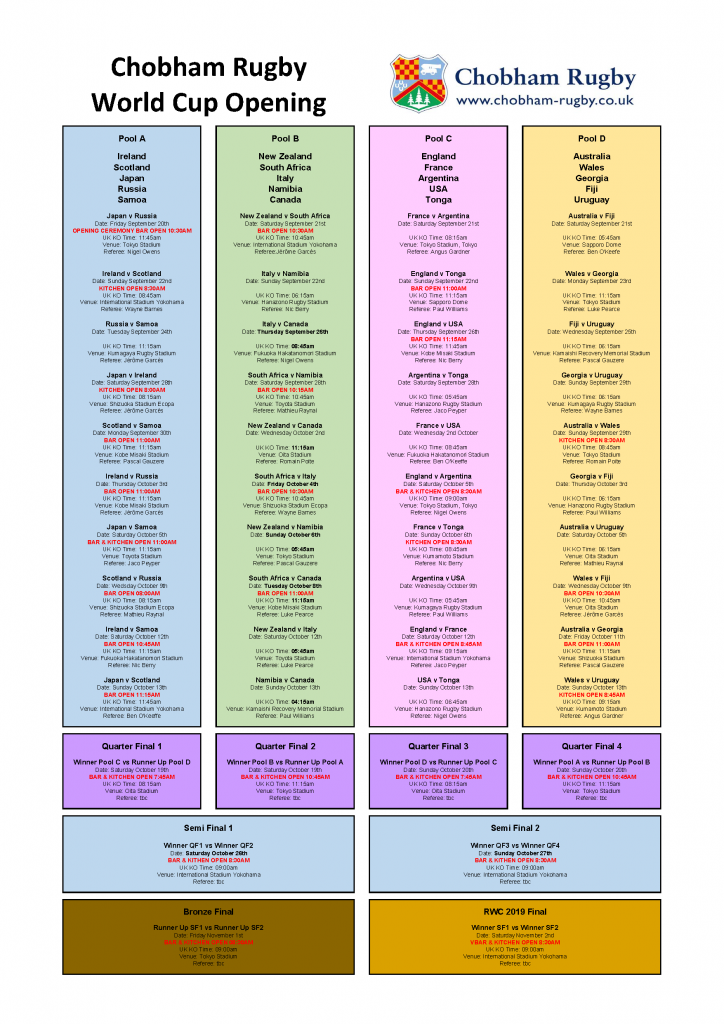 Opening times in red below: 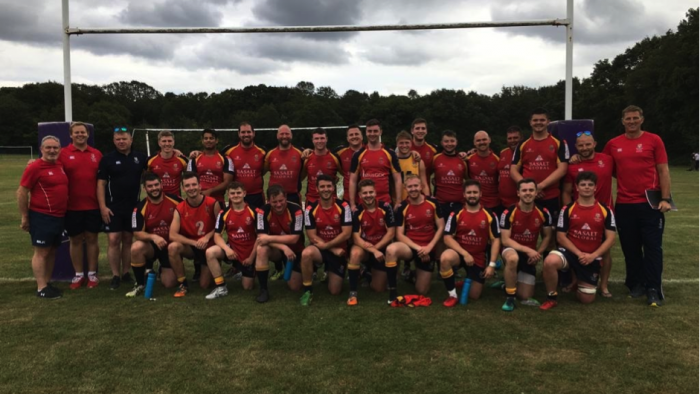 Chobham’s first preseason game of the 2019/20 season took them up the A3 to play a very experienced London Cornish team, Cornish were playing their third and final preseason game before they kick off their season in London 1 South next Saturday.

A number of senior players were unavailable due to a wedding (congratulations Scampi and Belle) so it was a small Chobham squad, which included a number of new players and those making their debut that took to the field.  I’m pleased to say that the 23 players certainly didn’t disappoint the Chobham faithful who travelled to London Cornish to watch #MightyChobham.

The respective Head Coaches agreed that the format for the game and that there would be four twenty-minute quarters.

Cornish were quick out of the blocks when they scored and converted to make it 7-0 within the first three minutes. Although Chobham found themselves a try and conversion down very early in the game they dug in and defended well against a very big forward line. Chobham’s backs worked well to set up a try for player coach Joe Reid who scored his first try for Chobham on his debut, the try wasn’t converted so it was still 7-5 to Cornish. Cornish were next to score and convert the try making it 14-5.

The score remained at 14-5 to Cornish for the next 15 minutes as both teams defended their lines well however Chobham were next on the scoreboard when Pete McCain barrelled over to score another try for the forwards.

Unfortunately, the try wasn’t converted so the half ended with Cornish just in front at 14-10.

New Head Coach Billy Davison made several changes at the half and Cornish were the first to score in the next quarter, converting the try to make it 21-10. Although Chobham defended well the stronger Cornish side scored two further try’s and kicked the conversions to make the score 35-10.

Further changes were made by both coaches at this point and Chobham hit back when the forwards managed to turn the ball over from a Cornish scrum inside their 22 yard line, two strong runs from the Chobham forwards enabled Adam Peever to find himself on the five yard line with ball in hand, Adam threw a dummy pass which fixed the Cornish backs and enabled him to beat two defenders to score his first try on his debut for the 1st XV to make it 35-15 to Cornish.

The third quarter ended with another try and conversion for Cornish to make it 42-15. The final quarter was interrupted when the game was held up for five minutes due to an injury to the London Cornish scrum half who suffered a cut to his head. Cornish ended their scoring for the day with a well worked try to score in the corner and convert the try to make it 47-15.

With only minutes remaining in the final quarter Chobham continued to pressure Cornish which resulted in Conner Stuart breaking through the Cornish’s defence to make a twenty metre run, the ball was lost forward in the tackle so Cornish were awarded the scrum, Chobham’s scrum once managed to dominate the big Cornish pack and the referee award a penalty to Chobham, Robbie Kennard took advantage of this by tapping and taking off which after some good inter play between the Chobham backs resulted in Tommy Reed touching down in the corner to make it 47-20. The conversion was missed so the final score was London Cornish 47 Chobham 20.

Billy Davison was very pleased with how his 23-man squad played “I’m very proud of the Chobham Rugby guys today – so much to celebrate. First outing against a higher-level opposition and what a response, only 4 points in it at the half, four brilliant tries and endeavour in abundance. Reasons to be cheerful? Many. My player of the day, very well-done to Ben Puttock”.

Captain Robbie Kennard “A pleasing start to the season and a good runout for the squad. Lots of positives and plenty to work on. Chobham managed to start putting in place our patterns of play which is encouraging but we would like to get out the back and play a little more; that will come with understanding and time!
Well done to the whole squad and in particular the debutants”.

Assistant Coach Ben Goldie “Very encouraging preseason match for the Chobham players, where a solid scrum and some great play in attack produced four tries against strong opposition! Looking forward to next week to build further, before the first league game of the season.”

Next Saturday will be a very busy day at Fowlers Wells, the days festivities kick off at 11am when the Surrey Chargers host a Mixed Ability Festival. The Chobham Girls section will also be out in force as they plan to play an exhibition game to promote Chobham and hopefully recruit more girls into their growing section. 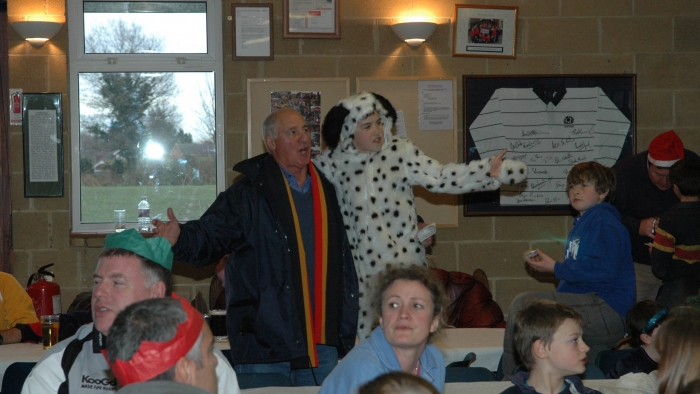 Sad news, Dick Fuller passed away this morning. Dick has been involved in the club for many, many years in his capacity as President, Club Chairman, Treasurer and 200 Club to name a few. He will be very much missed at the club. We send our sincere condolences to his wife Gay and his family. Fundraising Mardi Gras Masquerade May Ball Tables are on sale from today!

We have had an overwhelming interest again this year and to minimise the admin, paypal costs and confusion of individual payments we would like table leaders to collect payments and bank transfer the whole amount to the club account. Minimum tables of 10 (max 12).
Your table request will be confirmed once the payment is made in full and the completed booking form is received. Please see booking form for details.
Tables are being allocated on a first come first served provided both booking form and full payment has been received.
If there are individuals/couples interested in coming and not on a table, please email Carol Wickes and we will accommodate you where we have tables of 10 available.
Booking form here
Kind regards
Geraint Parry
Social Sec

For those new to the club as the membership sign-up is currently down you can apply for tickets but your membership will be checked when tickets are issued in February next year.

As there have been no Autumn internationals, for the 2016 Six Nations the applications will be put into a ballot rather than first come first served.

Note that the closing date is Saturday 10th October 2015.

We have a pair England v France tickets for this Saturday 8pm koThe face value is £101 each and must be collected and paid for at the club on Thursday night. please email me here if you would like them. The only stipulation is that you were a paid up member of the club last season.Usual rules apply about international tickets. Cheers Mike V.

After 18 years service to Chobham Rugby Club, through Mini’s, Juniors and Seniors Nigel Guy has decided to scale back his front line work at the Rugby Club and is stepping down as Director of Rugby for the coming season. However, he has not relinquished his role completely as he will still be supporting the new man in post in the background and providing support in his own inimitable, and professional style.

Please join me in welcoming David Page to the role of DoR, David has been providing support to the First XV over the past two seasons as a member of our Rugby Task Force and brings a wealth of experience to the role from his time as Rugby Manager at Esher and also as Manager of the Surrey U20’s. I know he is excited to get started as the season is almost upon us, with pre-season fixtures for the First XV starting next weekend.

So a thank you to Nigel for a fantastic job as DoR over the last 5 seasons and good luck to David as he helps Ryan, Tony, Liam and Chris as they embark on the next step of the journey for the Mighty Chob.

Passionate about rugby? Are you always on the touchline at Chobham senior rugby games? Are you a media or communication student? Thinking about a future career in sports marketing or sports journalism? We are looking for volunteers to help with regular match reports and other senior rugby content during the new season 2015/16. If you enjoy writing and are up for the challenge of capturing all the energy and excitement of senior rugby games for the benefit of all of our members, please contact Mike Vandenberg Please follow the link here for the podcast from Radio Woking These two matches are the final opportunity to see England in action before the World Cup kicks off this September.

Members are welcome to  apply for the tickets they require for these games as the RFU has not set a limit on our application. Please be aware that these tickets are not sold on sale or return so please make sure you don’t over order or request tickets for a game when you are on holiday.

Tickets in the £41 category are limited to a total of 4 for the club per match. In the event that applications for these are made after they have been reserved members will be contacted to see if they would prefer an alternative.

If you with to pay by bank transfer, please email Doug.