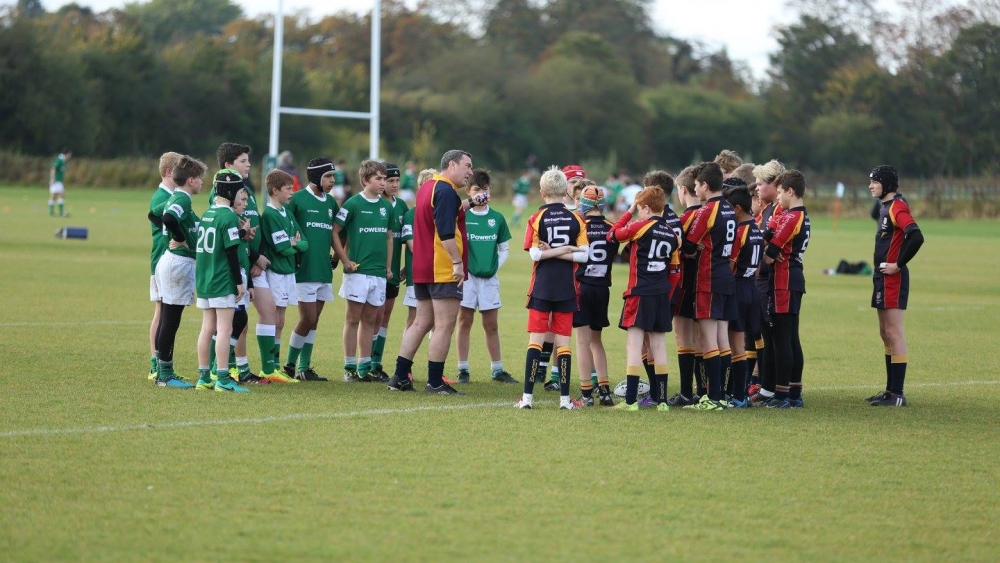 Match Report from Doug Mayger : At 10 o’clock on Sunday morning it seemed like Chobham might be heading to a swimming gala rather than a rugby match at London Irish. However, by kick off time the sun was out and the pitch still firm enough to allow expansive rugby. After a final word in the huddle from Joe, Chobham started like an express train with Irish completely overwhelmed at the breakdown and in open play. With only a couple of minutes on the clock the deadlock was broken before the men in green had put hand on ball. The defensive line creaked and TommyW burst through the midfield to go in from around the 10 yard line. DannyW added the extras courtesy of the post.

Irish kicked the ball back to Chobham who were able to continue the momentum, driving through the rucks and dominating possession, DanielP coming into the line and working with Andrew to create the overlap. The second try wasn’t long in coming as Harvey exploited a gap on the short side and pinned his ears back. The covering defence closed in and made a last ditch tackle about 5 yards out. Andrew was there in support and was able to make the break count, dancing inside a couple of defenders as he crossed over. Again Danny W made the kick, using the same post to make sure, and it was 14-0. Having found a successful pattern of play Chobham continued in the same vein. Irish were struggling in the loose and going backwards at scrum time, Joe and Billy giving them a particularly tough time, giving Sam the perfect platform to free the backs to make holes in the thin green line. With quarter of an hour played Chobham were on the march again, Lewis using the space out wide to go into the home half. After a couple of phases Callum made the decisive move to score the third try out on the left, giving DannyW another chance to work on his party trick and hit the crossbar this time, though this time it bounced away and it was 19-0.

Irish were finally able to get into the game with a period of pressure in the Chobham half, aided by a couple of penalties at the breakdown. After holding out a couple of direct attacks close to the line, the home 10 and 12 moved wide out left and were able to get on the scoreboard with an unconverted try. Chobham weren’t finished for the half though as Irish tempers frayed and Max was unceremoniously dumped on his shoulders after breaking through , the penalty leading to a line-out 10 yards from the Irish line. After a couple of phases the ball was passed left. A quick pass out of the tackle from Tommy to Aran gave him room to cut back against the defensive drift and spin over for the points under the posts for Danny to have the simplest conversion and it was 26-5 as the whistle blew.

Clearly the Irish coach had dished out the hairdryer treatment, as the boys in green were much more aggressive as the second half started. A couple of substitutions had brought on some direct runners who were making yards on the hoof and forcing the Chobham defence on its heels. Sensing a shift in the balance of play Irish continued with the short plays around the breakdown and it soon paid dividends. Irish scored the first try of the second half and with the conversion narrowed the gap to 14 points. With their dander up Irish kept up the pressure and more direct running led to a second try of the half and the score was now 26-19 with plenty of time to go. It was time for the boys to stand up and be counted, or face the prospect of undoing the hard work of the first half. To their credit this is exactly what happened. The tackling and rucking were sharpened up limiting the Irish territory gain with Harrison and Hugh to the fore. Forcing Irish back deep into their own half again after Rhys linked with the forwards, Finn was able to pick from the base of a ruck and burrow over to open the lead back to 14 points at 31-17.

The clock now was against Irish who started to force the play allowing Chob to wrap up the attackers and stifle any progress. A turnover led to a kick for the backs to chase. A lucky bounce for the fullback allowed him to get the ball to the left wing looping from the opposite side. This caught the kick chase too narrow and his pace gave him the room down the touchline to make it all the way, the cover forcing him wide to make the conversion too difficult and keep the lead at two scores, 31-22. Time was running down and Irish were forced to kick for territory. A Chobham line was gathered under pressure by TomH, who made an important couple of yards to allow the forwards to ruck over. MattW was at the base and saw his chance down the narrow side. Busting through a flailing arm he set off leaving all in his wake. The whitewash arrived before the cover and a crucial sixth try made the score 36-22 with only a couple of minutes left.

To their credit Irish kept battering away and managed to get a try back very quickly, crucially though the kick was missed and Irish still needed two scores. Chobham were able to see out the last play and force Irish to spill the ball in the tackle and it was a second Round Robin win in a row for the triumphant Bs.