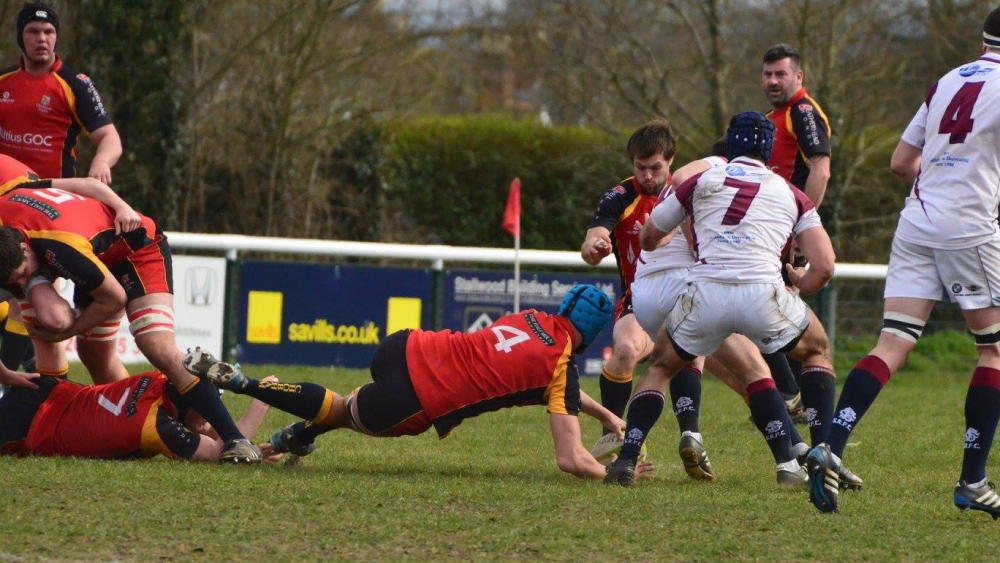 Against the league’s top sides Chobham seem to excel and this was to be no exception. With Sidcup vying for promotion and in a tussle with Guildford for 2nd place and a playoff game defeat was never a doubt in the Kent’s teams mind. Mighty Chobham had other ideas. Chobham were able to provide a strong side due to University Easter break and with Alex Suzi Seers in at fly half it provided the fillip at fly half the side have long been missing. Linking up with Match day captain and scrum half Ian Barnes they proved what a great pairing they are. Returning players from injury, Dom Sammut and Josh Devitt also gave much needed strength to the squad. After 18 minutes of too and fro rugby it was the visitors who gained the first points when from a rolling maul the Sidcup 8 popped over to score. 0-5. The game was very much being played at high tempo something that Chobham thrive on but have been missing in the last few weeks, on 27 minutes Chobham got their first score of the day when Seers converted a penalty 3-5, he had a further shot on 31 minutes from inside his own half but this went just wide. With the game now being played in the Sidcup half and in particular their 22, Chobham began to turn the screw and on 40 minutes a trade mark rolling maul from a well won lineout saw the Mighty Chobham take the lead 8-5, Seers missing the extra’s. Half time Chobham 8 – Sidcup 5.

The 2nd period began with Chobham once again in the ascendency and with only 2 minutes of the half gone Chobham extended their lead with a Seers penalty, three minutes later he obliged again as Chobham won turnover ball from excellent forward pressure. 14-5. Sidcup being the strong side they are began to fight back and their fly half Sam Evans pulled three points back on 49 minutes, he failed with a further attempt on 53.

The game was becoming a tight affair, Sidcup knowing defeat would almost put paid to their promotion hopes, Chobham trying to pull off a timely victory. On 66 Minutes a break in midfield released Josh Devitt on for Callum Edwards, Devitt in open space is lethal and with a two on one he passed to his wing partner Liam Monaghan who went over under the posts, providing Seers an easy conversion, 21-8. Sidcup were now throwing everything including the proverbial kitchen sink at Chobham, on 73 minutes a scrum on the Chobham line, a Sidcup put in saw an 8-man shove and a score to narrow the gap, with the successful conversion the score line read Chobham 21- Sidcup 15, nerves were jangling as the Chobham faithful looked on, the players knew victory was in their grasp, Sidcup were staring at another year in London 1. With the clock ticking down it was Chobham who showed that they are mighty once more and they fought and fought hard to stave off any Sidcup attack, Suzi Seers had the final say of the game with another successful penalty on 77 minutes, awarded due to Chobham’s superior play at the breakdown, 24-15. Sidcup had two minutes to score twice and this was not in the script – Chobham were victorious – Sidcup distraught, Guildford must be rubbing their eyes in disbelief.

Next game is away at Maidstone on Saturday 9th April – Chobham final home game of the season is on Saturday 16th April versus Tottonians (Chobham will be looking for revenge following the 70 -point drubbing back in December).