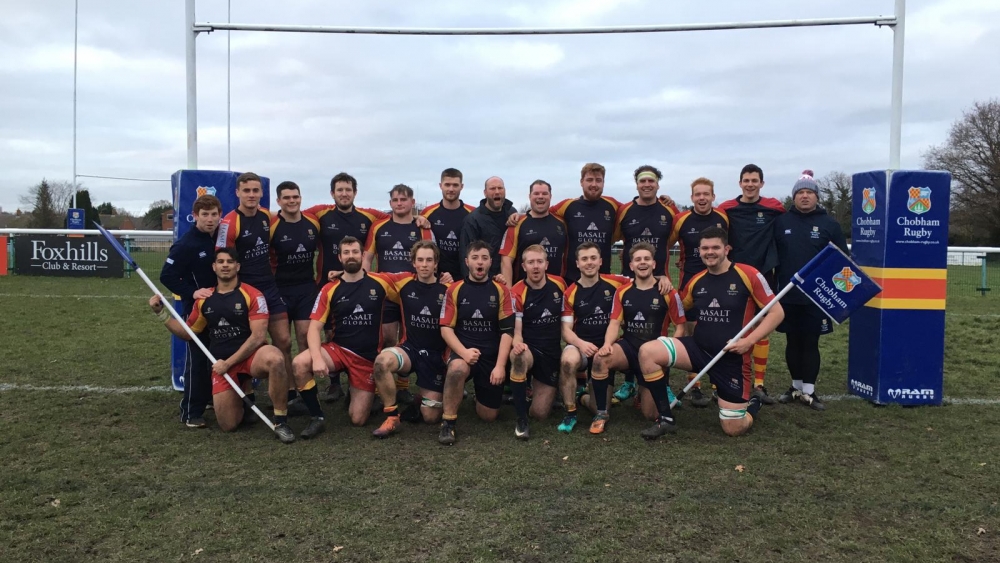 Saturday saw Sutton & Epsom return to Chobham for the second time this season after the cup match-up earlier in the year – this time on the sloped 2nd XV pitch.

The Cannons were able to welcome back Club Captain Andy Carroll and Connor Spruzs after injuries and the production line of teenage back row forwards kept on going with Henry Hopkins making his debut. After Ciar Cox had traded penalties with the Sutton & Epsom kicker in the early moments of the first half the visitors were the first to cross the try line after a kick through was hacked on and they managed to get to the loose ball before the covering defender. The lead was short lived however as Cox helped himself to a try and kicked the extras to draw things level once again. The resulting kick off down the slope failed to make the ten metres and the Cannons took full advantage from the centre field scrum. Attacking right, Adam Peever fed flying winger Alex Julian who unselfishly returned the ball back inside for Peever to go in untouched. With Cox once again adding the two points, the Cannons had gone from 10-3 down to 17-10 up in a matter of minutes.

Chobham were now playing free flowing rugby with forwards and backs linking well between the two 22s. An offside penalty saw the Cannons kick to the corner chasing the four-try bonus point – the line-out worked perfectly and from the driving maul Carroll scored the five-pointer the side were after. The reliable boot of Cox saw the lead stretch to 14. From the next kick off Chobham kept possession, moving the ball from the right to the left touch line where James Somper proved difficult to put down. After gaining significant yardage the ball was recycled quickly and then went through multiple pairs of hands before Steven Ball dotted down to the left of the posts.

The Cannons were still not finished even though they were playing up the hill and the forwards took control when within 5 metres of the line, Carroll touching down for his second of the afternoon. Chobham turning around after 40 minutes 34-10 ahead after some breathtaking passages of play showcasing why they are unbeaten this season in both league and cup.

The first half had set a high bar and would be difficult to maintain, but apart from a 15 minute patch when the Cannons took their foot off the pedal and let Sutton & Epsom back in for their second try of the match it was further one-way traffic. Khan, Somper and Lewis added tries before the reply, and Peever and replacement Perry afterwards, stretched the scoreline out to 67-15 by the final whistle.

This result sets the Cannons up nicely for the final match of the first half of the season next week away to Law Society who have also found some good recent form and now sit in second place.