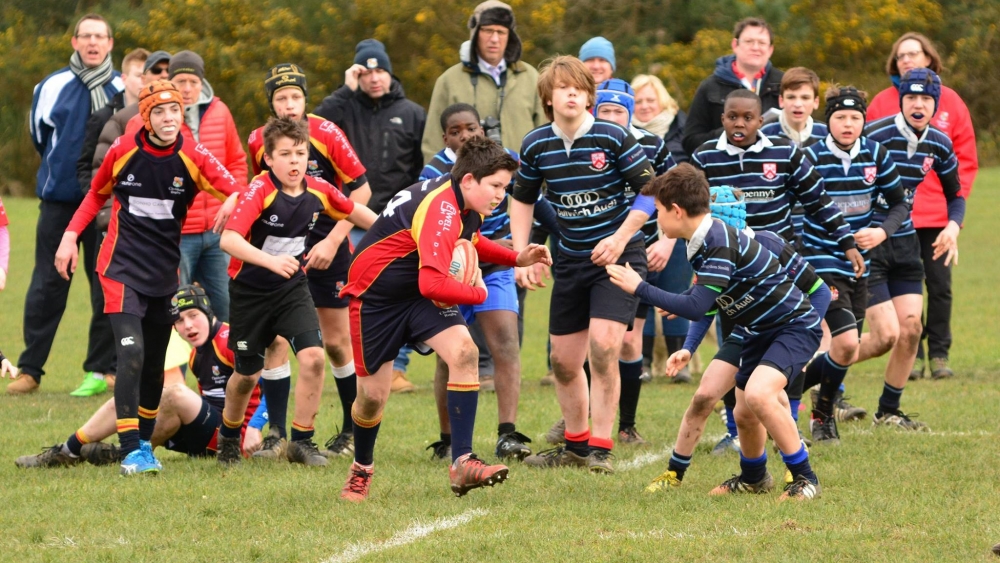 Match Report from Doug Mayger : Chobham Under 13 As played in the opening round of the Waterfall Cup on Sunday against Old Alleynians, an unknown quantity having never met them through the minis. With the minis hosting a festival at Fowlers Wells the match was relocated to Lightwater Country Park.

Alleynians kicked off and were obviously up for the game as they conceded a free kick for being in front of the kicker. Play settled into a midfield battle in the opening minutes, with Alleynians setting out their very direct style with a couple of strong runners who were aggressive when carrying the ball and without.

Using the wind Alleynians eventually pinned Chobham down in their 25. Alleynians re-gathered the ball at the lineout and worked the ball across the park, with a series of drives at the defence. Eventually the defenders had all been sucked in and Alleynians scored the opening try towards the right hand corner. A good conversion added the extras for a 7-0 lead. From the restart strong carries pushed Chobham back deep into their 25 again. This time though Matt made the steal and Danny was able to clear to touch, winning a penalty downfield after a very late tackle.

The penalty count against Alleynians was rising as Chobham were able to gain a foothold in their half, and went close to scoring, only for the ball to be lost almost on the line.

With both teams looking to carry the ball to the opposition the match started to get fractious with numerous penalties and squabbles breaking out from both sides. Late in the half Alleynians were again well in the Chobham half and were awarded a penalty. Surprisingly they opted to go for goal and this time the ball flew wide and the score was 7-0 with half the game to play. Chobham now had the advantage of the conditions and looked to make use straight away with a line out 30 yards out. Alleynians conceded another penalty and the Chobham moved it quickly wide but the defence was able to force a wayward pass and clear the lines. Undeterred Chobham were now starting to play more rugby and making ground using the three quarters. It was the forwards who did get the first score however with a number of pick and drives got close and Reece was able barge over in the corner to reduce the lead to 2 points.

Moments later Chobham thought they had taken the lead from a quick tap penalty, but the referee had been distracted by a late off the ball incident dragging most of the forwards to the defence of their team mate. The game ebbed and flowed, with Doug being strong as second receiver and kicking over the defence to carry the game into Alleynians territory, but the crucial strike couldn’t be delivered.

The Alleynians defence was breached finally from another penalty. Al was almost in from a quick pick, but was hauled down. The ball was recycled and spun left with Theo offloading out of the tackle and Connor crossed the whitewash wide out left again to take the lead at 10-7.

Alleynians now had to chase a score and produced a good kick deep into the corner to win an attacking lineout. Chobham’s pack held firm and stole the ball again allowing the clearing kick to be made and a strong kick chase forced the fullback into touch on halfway. Fin and Reece worked into A’s territory to count the clock down, but more altercations in midfield meant that several minutes off injury time were due. With a penalty to As they went hard at the Chobham defence and with a couple of carries got to 5 yards from the line before a game clinching steal at the tackle from Harry meant lines were cleared and time ran out with Chobham taking the spoils thanks a 10-7 victory, showing that they won’t take a backward step and have a real sense of looking out for their mates. The reward for victory ? Yet another game against the boys in black and white over in Farnham.