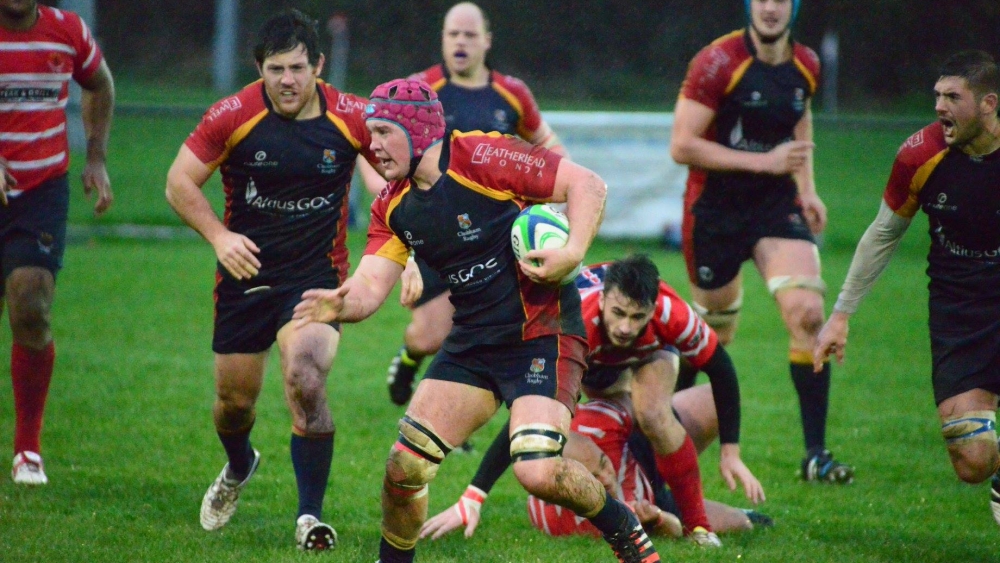 On a cold and wet November afternoon Chobham travelled to South East London to face promoted Charlton Park. Charlton Park steeped in history and been in existence for over a hundred years came off the back of a great away win at Havant, the very team that began the trail of three losses for Altius GOC Chobham. The Surrey side needed to win and get back on the horse after the string of defeats, they did not let the traveling faithful supporters down. The first half saw Chobham facing an icy wind and they fell behind to an early penalty by the Charlton Park outside half, but this was to be the nest they achieved all day as Chobham began to take a strangle hold from the 20-minute mark although it was some 18 minutes later that they managed to breach the home sides stubborn defence and this came on 38 minutes No 8 Ollie Smith opened the Chobham account as a series of pick and go, ended in success for Smith, the first of his hatrick of tries. With regular out half Thomson now out, the kicking duties went to Liam Monaghan who duly obliged with the conversion. Half Time 3-7 The restart and the early play of the half caught many supporters out as Chobham took control from the outset and within minutes went further ahead when flying winger Josh Devitt went over after sailing past three ensuing tacklers, the conversion went wide 3-12.

Chobham were now running the show and it was only the wet conditions that stifled there running display as the ball became greasy and difficult to hold. Showing all the attacking flair through the backs, and the forwards controlling the set pieces it was not long before they scored further points and on 60 minutes Smith scored his 2nd as a rolling maul from the lineout powered over the try line, smith coming up jubilant, Monaghan adding the extra’s. A series of further drives seemed to result in further tries, one seemed very clear for prop forward Evans, but the official was unsighted. Chobham continued to seek the bonus point and they were rewarded on 75 minutes when Smith scored his third try, Chobham’s fourth and the bonus point was secure. Following a run of three successive defeats it was important to get ‘back on the horse’ and back to winning ways, hopefully this continue next week when Chobham host Chiswick on the day that has been assigned as Ladies day. Prior to the first XV game, Chobham Ladies play London Irish Ladies and a huge fund raising luncheon event will be held at the club with some injured 1st XV players designated as the waiters for the event. Players will be auctioned off.