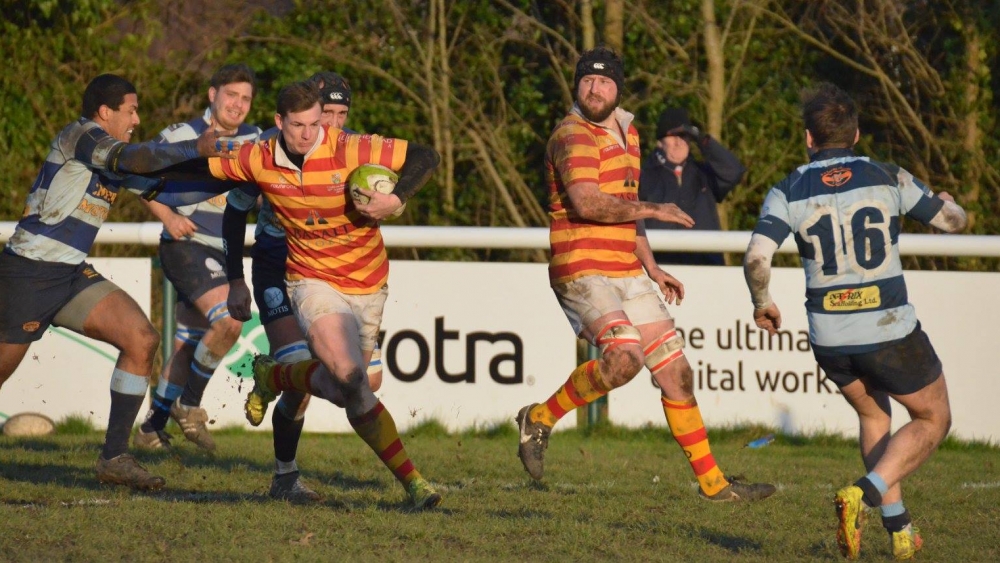 ‘Basalt Global’ sponsored Chobham needed to bounce back after last week’s poor performance at Cobham, they did as they raced to a 51 point to 10 victory over relegation threatened Dover.

The writing was on the wall for Dover from the 1st minute, from the kick off by Dover, Chobham’s Alex Seers returned the kick which hit touch inside the Dover 22. The Dover line-out was stationary as they threw the ball in, taken by Dom Sammut who sauntered over the Dover line for the first of his three tries, Seers Converted and Chobham led 7-0 on minute 1. Dover a young side being rebuilt tried desperately to show new head coach Danny Vaughan they had something about them, but they just looked inexperienced. Chobham played rugby which at times was classy but the level of opposition needs to be considered. In the opening 10 minutes Chobham butchered three chances where overlaps were on, they either threw poor final passes or they went forward.

It was not until minute 13 that Chobham’s scored next. A series of infringements by Dover leading to penalty after penalty led to referee Simon Matthews giving a penalty try and the Dover flanker a yellow card. Seers converted and Chobham’s lead went to 14-0. With 21 gone, a Dover scrum was turned over, the ball moved out of the scrum, and after a few phases and good handling the ball found it’s way to Sammut who went over for his 2nd of the day, Seers missing the extra’s 19-0

Chobham went for the early bonus point and this came in the 31s minute when a nice back move involving Seers, Captain Tony Paul went wide to Phil Williams who went over and the Seers conversion gave Chobham the lead 26-0. Chobham seemed to rest on their laurels a little and took the foot of the gas, this allowed Dover to come back into the game early in the2nd half scoring a try in the 51st minute. This rightfully put a rocket up the Chobham preferable and in the 53rd Minute Jayde Cruickshank was on the end of a huge rocket like pass from Seers and he made his way easily over the line – 31-5. Minutes later Liam Monaghan was at the end of a move started with an Ollie Smith kick ahead which he chased, managed to get and off load to Sammut which he passed out to the sprinting Monaghan 36 – 5.

In the 65th Minute some finest French or Fijian flair led to Chobham’s 7th try which ended with Josh Devitt on the score sheet Seers added the extras 43-5.

Chobham down to 13 men as Ryan Gregory and Prop forward Reb Abdoullahi were both in the bin for different offences put the Chobham scrum under pressure and despite holding for 8 minutes they eventually succumbed and Dover scored a 2nd try 43-10. Chobham still down to 13 then had the final two scores of the game, a penalty by Seers and in the dying seconds a third try for man of the match Dom Sammut.

Chobham can take some comfort from the game as they won and scored tries, 8 in all. With only two games played this week, it moves Chobham up a league place, but next week they face league leaders Sidcup at home and this will be a real test. Kick-off is 2pm.