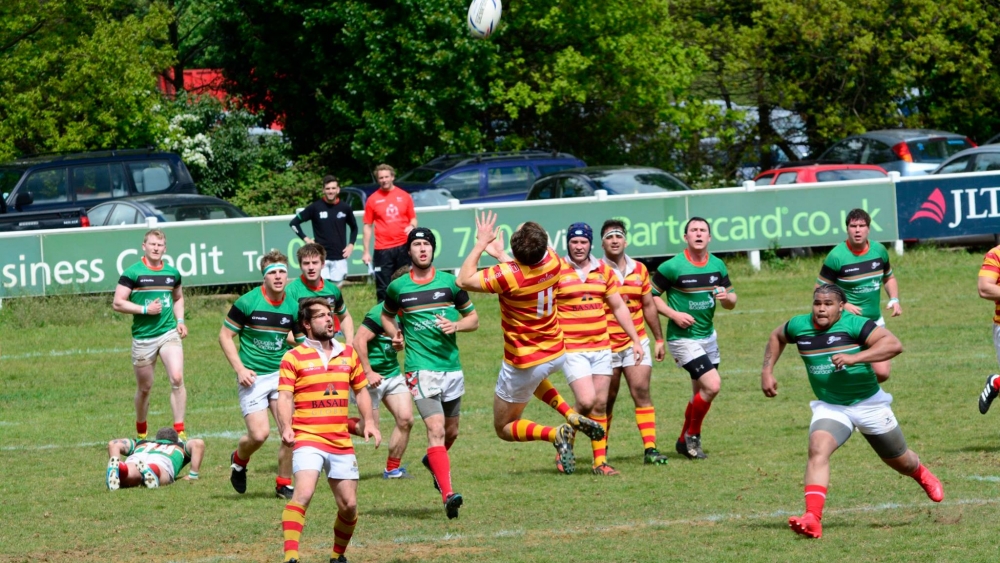 ‘Basalt Global’ sponsored Chobham ended their 50th Season with some silverware as they beat a resilient Battersea Ironsides.

Playing on the Esher pitch was sure to help Chobham whose backline on its day is explosive and this proved to be a key factor as the Mighty Chobham opened the scoring after only 6 minutes. Having had most of the early possession, Chob began to play out of their own 22, with the ball just inside their own half, centre Dan Mays collected the ball and cut one way, then the other as he raced past the bemused Ironsides defence to score, Alex Seers missing the conversion -5-0.

Chobham looked good and seemed determined to cast the shadows of the season behind them. On 15 minutes a line out on the Ironsides 10 metre line saw Chob set up a driving maul, a feature of their play that had been lacking in recent weeks. On this occasion, they drove towards the line and eventually went over with hooker Tom Riley coming up with the ball, Seers kicking the extra’s 12-0. At this point Chobham were the superior side and showing great style and panache, then as if to go back into that same old shell of previous weeks, they allowed The Ironsides back in and for the next 20 minutes they dominated and put Chobham under pressure. In that time, the penalty count against Chobham went to 10 and this is far too many in normal circumstances. But the Chob defence held firm.

Ironsides played some great rugby and with their powerful inside centre the catalyst they made inroads in the Chobham defence, but they just did not have the final pass or gain that extra yard that was needed.

Chobham took a 12-0 lead into the break. The 2nd period Chobham now refocused looked to assert once more and score try number three after 42 minutes. Scrum half Ian Barnes kick ahead bounced favourably for Chobham’s Alex Thomson to collect, throw an inside pass which eventually found its way to a delighted Chris Kent who went over, Seers added the extra’s 19-0.

On 50 minutes, another period of Ironsides play saw a driving maul of their own, this was brought down by Chobham illegally and playing advantage the ball popped out to fly half Peter Donnell who chipped over the top and collected he ball as it dropped and went over much to delight of the BI supporters. Guy Newman adding the conversion 19-7. Chobham rang the changes and brought on as Eddie Jones calls them, the finishers. With the young lads now on against a tiring Ironsides team Chobham dominated. Firstly on60 minutes Callum Edwards went over, Thomson now kicking for the injured Seers added the extras. 26-7

On 70 minutes Sam King in at 9 for Barnes took a quick tap penalty that set up The supporters player of the year Ollie Smith to score, with no conversion the score went to 31-7.

With the game well in Chobham hands, the travelling supporters began to celebrate, they had one further try to drink too and this was fittingly scored by retiring Centre Tony Paul, the distance he made to score varies from person to person, whatever the distance he scored and the players celebrated with him, with Thomson kicking the conversion, the Trophy was secure as Referee Simon Matthews blew the final whistle.