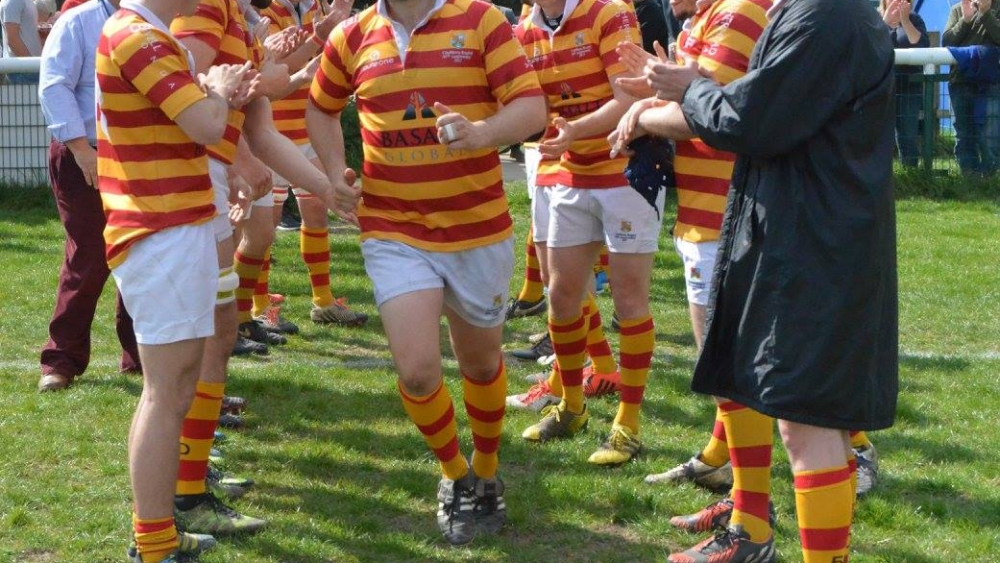 ‘Basalt Global’ sponsored Chobham were looking to end the league campaign on a high, but Gravesend were not buying into that and following a half time Chobham lead, it all went ‘pear shaped’ in the 2nd period.

Chobham have for the 2nd season been hit by injuries that whilst not as bad as last season, has completely destroyed any chance of continuity from game to game. Having had to be without regular lock Dom Sammut, they lost a player In the warm up, Sam Gratton a the young gun prop who had been a regular at tight head, he twisted an ankle and this led to a frantic search for a replacement front row, without whom the game could not go on – Step in Robbie Brown – Robbie had just played 70 minutes in a vets game and now he was on the on the team sheet for the first time in many years. The side formed a guard of honour for Skipper Tony Paul who announced he was quitting league rugby, Tony a former Rosslyn Park and Ealing player has played over 100 games for the mighty Chobham – He will now be looking at focusing on coaching the 1st XV next season.

Begin the game and, both sides attack with gusto and looked to play a Barbarian style to entertain the crowd, both defences were on song at this point and refused to budge and the only points on the board were from the boot, Alex Seers hitting 2 from 2 and the Gravesend kicker being slightly off target hitting 1 from 3. At half time the game looked good for Chobham as they were going down the slope. Injury hit again when regular Joe McVey took a knock to the head and left him with a hospital visit for a suspected broken cheek – We wish Joe well.

Once again and in the same vain as too many other games this season, Chobham were hit by an early 2nd half sucker punch , this time after only 40 seconds of the half and Gravesend were back in the lead, a lead they did not now look like giving up. The Kent side extended and extended the lead against a Chobham side whose heads went down and in the end conceded 5 tries to lose 32-6.

This was a bitterly disappointing end to the season and it left the players angry and the Chobham faithful frustrated. After the game a massive club St Georges Day celebration social looked to help heal the wounds, and with the popular Ollie Smith (out injured) picking up the Club Supporters player of the year attention began to focus to next week when the side have a massive chance to redeem their selves with the Surrey Trophy Cup Final versus Battersea Ironsides – The game at Esher RFC kick off at 1pm. The season ends on Monday 1st May (May Bank Holiday) with a great chance to end the clubs 50th Season on a high with the Surrey County Trophy Final – Silverware always helps.