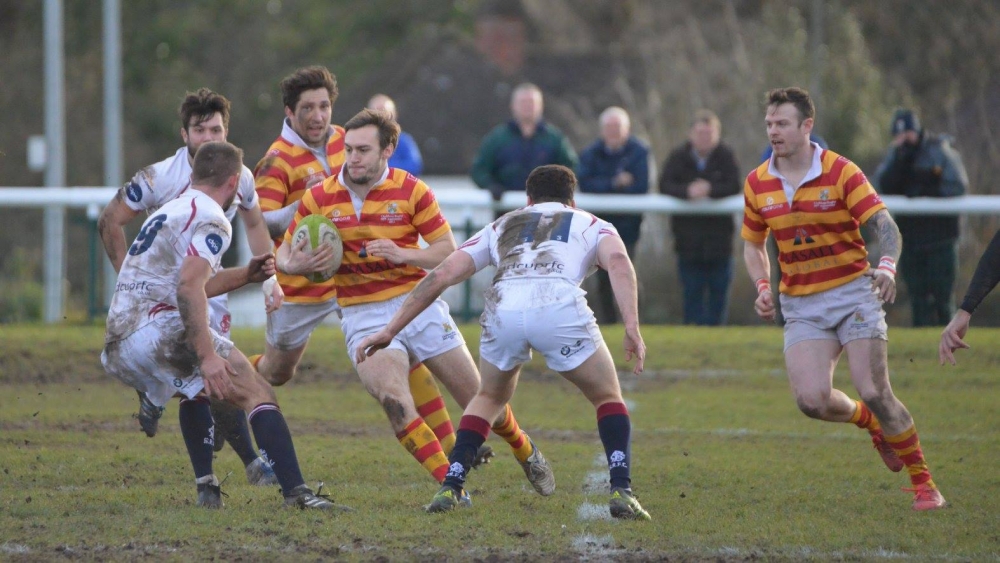 ‘Basalt Global’ sponsored Chobham were dealt a second half  lesson by league leaders Sidcup after holding their own in the first period. It was a similar tale top that from the away game at Sidcup, Chobham holding their own on the first 40, then taught a lesson in the 2nd. Chobham opened the scoring on 15 minutes as Alex Seers slotted over a penalty awarded after some great period of set plays by the Chobham backs seemed to stun the league leaders, 3-0, A tight affair looked on the cards as Chobham matched Sidcup, play for play and tackle by tackle each side having chances, Chobham’s slipping away in all to familiar fashion with dropped passes and being ton eager and giving forward passes, Sidcup on the other hand looked composed and made few errors.

On 22 minutes Josh Devitt the Chob winger was oh so close to an interception, but it was not to be as he knocked the ball on. That seemed to b a turning point as Chobham were giving as good as they got but minutes later the visitors got on the scoreboard as pressure at scrum time began to tell on the young Chobham front row and Sicup taking advantage from the penalty award at the scrum, leading  to a penalty kick to touch, a line and drive which proved to be the Sidcup first score, the try converted and Chobham trailed 3 points to 7.

Matters were still  tight and Sidcup increased their lead on 38 minutes with a try again from pressure at the scrum, 3-12. With the clock ticking down. Chobham showed the kind of rugby they can play and with a series of 14 phases going from inside their own half ending with a try by Phil Williams in the right corner, Seers converted and Chobham were very much in the hunt at half time trailing by 2 points 10-12.

The 2nd period was Sidcup focused and and they increased their leas on 48 minutes, further on 60 and 67 minutes with three further tries and led 31-10 from the 67th minute. Sidcup do not have flair, but what they do, they do really well and keep going at sides until they falter as shown in Chobham’s case. Chobham’s never say die attitude saw them get the final score of the game taking it to a respectable 15-31 loss, but they were given a lesson the 2nd half and will hopefully learn from that moving forward for the rest of the season.

No game next week, then it is back to back verus the two botton sides in the league starting with Brighton away on Saturday 11th February.