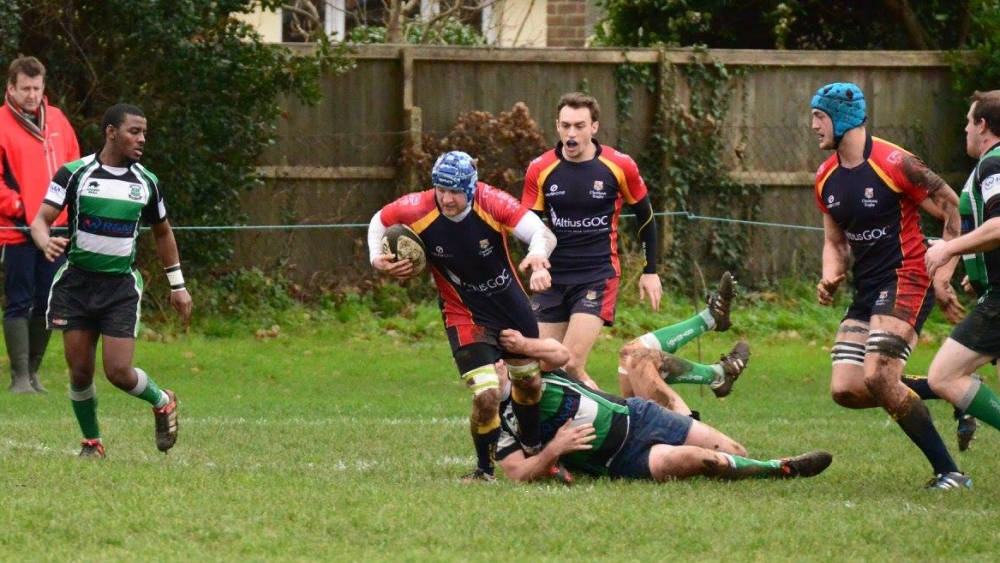 This was a very bad day in the office for the players, coaches and Chobham faithful who braved the chilly and windy South Coast as their team faced Tottonians. Totts were another team that had in a previous season 3 years ago had been demolished by the then surging Mighty Chobham. On Saturday, Chobham were neither surging nor mighty as they were dealt a lesson on the Rugby field. Totts opened the scoring on 10 minutes when their fly half, captain and playmaker slotted over the first of a number of kicks he would have on the day.

Within minutes Chobham did look as though they may have been mighty and a rolling maul led to hooker Ollie Wakefield scoring as the maul went over the Totts line, fly half Lawrence Eliott added the conversion. Savour those 7 points as that was the last time Chobham would trouble the scoreboard operator. From the 14th Minute Tottonians began to feed and live well on the countless mistakes Chobham would make and three converted tries and a penalty gave Totts a 27 point to 7 lead at half time.

Maybe the wind would help as this was now at Chobham’s back, the wind only made for more errors as kicks direct into touch, kick offs not going 10 just added to Chobham’s woes. 6 further second half tries, 4 converted gave Tottonians a very well deserved victory by 65 point to 7. The defeat is the largest the 1st XV have suffered in many-many years. More injury worries added to the already huge list as Ollie Smith was forced to leave the field with concussion. The side also bid farewell to their Kiwi gappie Matt Dougall and Fouhey.

Next Week the side face Dover at Home at the beginning of the reverse fixtures, if there was any time that the players needed a performance, then it will be on the 19th and hopefully a victory will at least give the Chobham faithful some festive cheer.