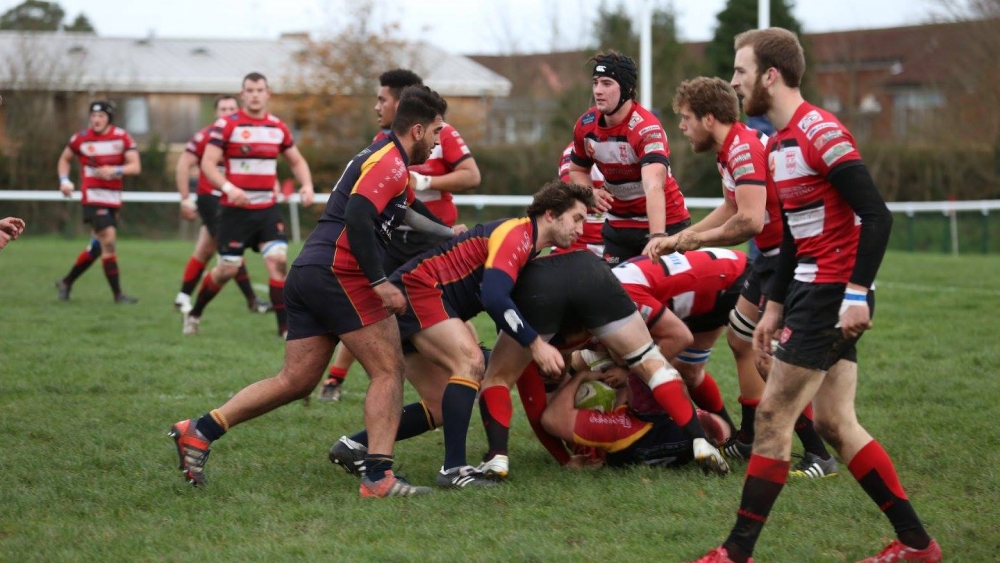 Chobham suffered second half blues yet again in this Surrey v Kent encounter. The two sides had met six times previously, Chobham winning all six, the last by 111 points to nil. This was revenge time for the Visitors. On a day when the wind was blowing a gale, conditions looked to be tricky to play with, but both sides showed sublime skills at times.

It took some 20 minutes to get figures on the scoreboard after Chobham’s Lawrence Elliot taking the 10 shirt for the first time missed an early penalty kick. Both sides played some positive rugby in difficult circumstances and it was on 23 minutes that the visitors took the lead against the run of play – 0-5.

Chobham then focused and scored three converted tries in the space of eight first half minutes, on 32 a snipping run by scrum half Ian Barnes was closely followed the first of the brace from Ollie Smith and on the stroke of half time Josh Devitt showed his lethal finishing by dodging 5 Maidstone defending players – 3 tries all converted by Elliott. 21-5 With a 21-5 lead visions of the week before when the Chobham threw away a big lead were far from the front of mind, even more so when Elliott extended the lead with a 45th minute penalty 24-5.

For the remaining 15 minutes of the 3rd quarter Chobham looked sharp and put Maidstone under constant pressure but could not capitalise and one of two poor errors of judgement meant Maidstone still had a sniff. Injures once again blighted Chobham, to add to the now extra-long list, Simon Greenhalgh broke an ankle and Josh Devitt smashed his ribs, both will be out for some weeks – the club could pick an exceptional 15 from all the players on the injury list.

The last quarter was not a pretty sight for home fans as Maidstone ran in 4 tries in 13 minutes to put them in front 24-31, a drop goal on 77 minutes extended the visitors lead to 34-24. At this point Chobham were coming away empty handed – with the clock ticking down, Chobham’s Ollie Smith ran from the halfway line, out witting the Maidstone defensive line to score under the sticks – ‘Oh how easy that was’, with the conversion by Elliott closing the gap in the score to 3 points – but still a loss – 34 points to 31. Chobham will rue simple errors in the game and failing to close out a game when being in control. Lessons have to be learned and quickly if the side have any ambition in trying to get a top two finish. The margin of the losses this season have been so small, it shows that small margins win games.

Next week the Mighty Chobham side travel to Southampton to play Tottonians in the final round of games in the 1st half of the season, one week later they entertain Dover.