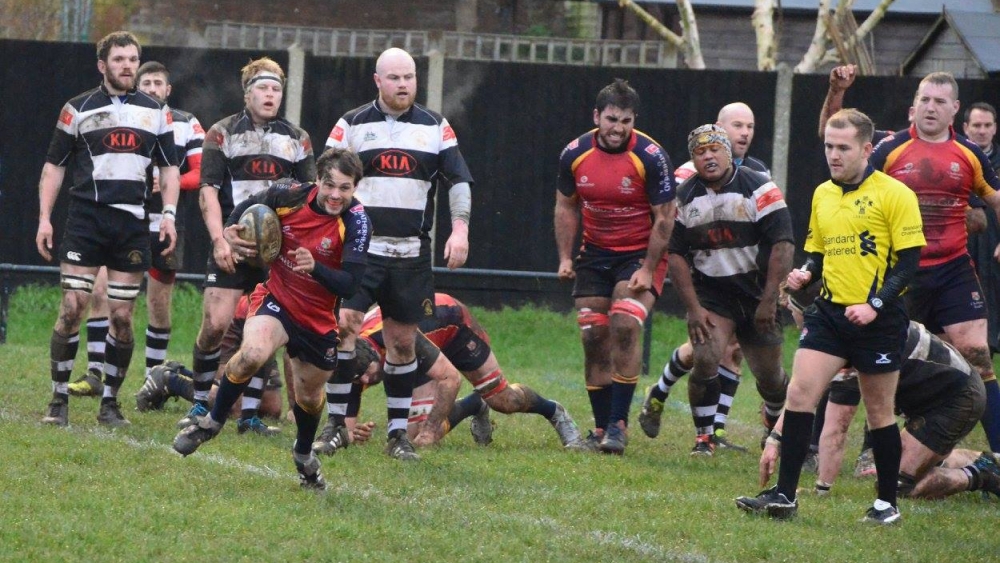 This was a much improved performance by Chobham who faced a difficult task against the league leaders. With the lengthy injury that continues to grow and with the general performance being below par it was refreshing to see that the team sprit was still very much evident.

S&E opened the scoring after in 6 minutes when Wiley old fox and former England international Paul Hodgson kicked a ball through for the home sides wing to collect and just ground, the conversion was good (7-0). Even at this early stage in some games in recent times the Chobham heads would droop, but not today and with minutes they pulled a score back through the outstanding effort of Ollie Smith.

The game ebbed and flowed with both sides hell bent in giving the large crowd some entertainment, the crowd from both sets of supporters were not disappointed. On 17 minutes the home side took advantage of a defensive error and missed tackle to increase their lead to 12-5.

Once again Chobham belied there 20+ league points difference and pulled back a score through the energetic scrum half Ian Barnes who was more than a match for his former England counterpart, Alec Thompson added the extras and the score was levelled at 12-12. The game was really action packed with both sides giving everything, on 25 and 3o minutes Sutton took advantage of two more defensive slips and scored tries on both occasions, with one converted they led 24-12 with the clock ticking down to half time.

Chobham had the final word of the half and once again Smith stepped up to the plate and scored, with Thompson converting the half time score was a respectable 24-19.

The 2nd half seemed more lack lustre as both sides felt the effects of the stunning 1st period, it was though Sutton & Epsom who managed two more scores again from minor defensive errors and in the end would agree they were flattered by the 38-19 final score line. Next week Chobham make their third away trip in a row as they visit 2nd place and local rivals Guildford. These games are normally high tempo, high quality and high tension, with all the pressure on the home side, Chobham can just go out and enjoy the day. Kick off next week is 2.30pm.