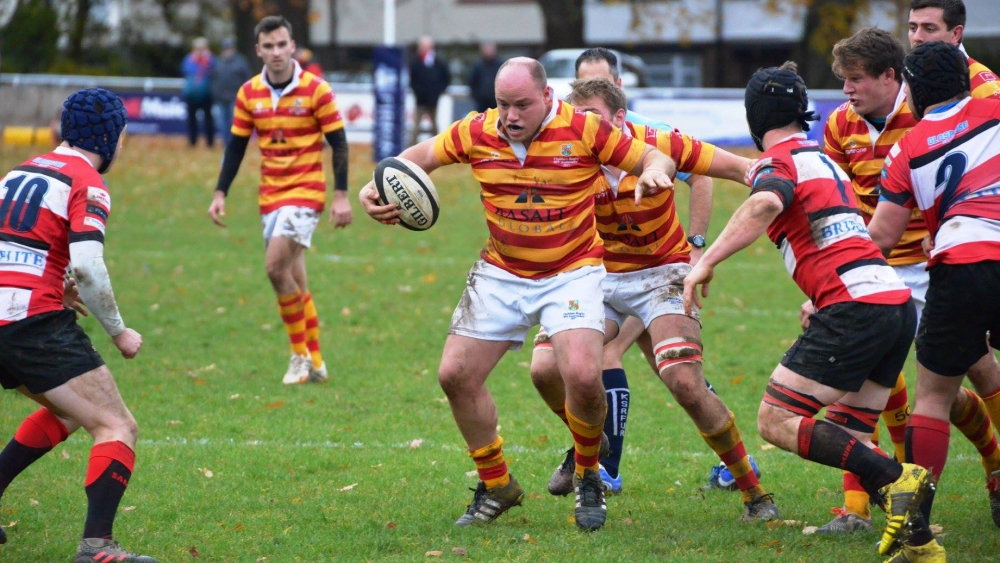 With ‘Basalt Global’ sponsored Chobham travelling to Kent on the back of a 3 match winning streak and a cracking victory over high fliers Tunbridge Wells last time out, it was a pity for the coaches to have to work with 4 changes from the last match day squad, 3 of which were up front. With Maidstone having a similar results record this season, it all pointed to a tight mid table battle with, on paper, little to separate the two teams.

The game kicked off in pleasant late autumn conditions with the first 10 minutes being fairly even. Maidstone missed the opportunity to nose in front when Brendan Trudgeon missed a simple penalty but Chobham took the first points and what a score it was too. Spotting a back line mismatch in his own 22, fly half Owen Glover took on the home backline and after hitting the after burners raced 75 metres to touch down under the posts for a brilliant individual score. Alec Thomson added the extras. Disappointingly instead of using this to assert some superiority, Chobham surrendered the lead quickly as a misplaced off load coughed up possession which Maidstone exploited through prop Ben Williams who after some close quarter drives crossed the white wash. Trudgeon added 2 more to tie the scores, but then missed another penalty chance. With 20 minutes played, it was clear that Maidstone were edging the contact area denying Chob the opportunity to use their backline which clearly had the edge on the counter parts. This was best shown in 30th minute when the forwards delivered some great ball and the back line executed some excellent running lines and handling for speedster Callum Edwards to race over for the try. Thomson converted. The game continued in its fractured manner with Chob conceding too many penalties and indeed not getting one of their own until 31st minute, and this coupled with an inconsistent set piece meant that there was plenty of room for improvement. In the final minute an opportunity to extend the lead was denied by the post as a Thomson penalty rebounded safely. Halftime.

The interval message was straightforward. Dramatically reduce penalty count, increase the consistency of set piece and deliver good quality ball to the back line to exploit the clear superiority in that area. Cue, black clouds and downpour! Within 5 minutes of the restart heavy rain started which increasingly turned the contest into an arm wrestle. With Maidstone using their big ball carriers, Iles, Williams and Webb well, Chob were forced on the back foot and became light on possession and again the penalty count grew. The home team narrowed the gap with a Trudgeon penalty which was helped by the cross bar and it was clear that Maidstone were now winning the gain line contact and Chob were surviving on scraps. More minor indiscretions pinned the visitors back in their half and the continued set piece inconsistency, not helped by the increasingly tricky conditions, meant a failure to exploit any attacking opportunity. Eventually the home team, despite having the majority the possession and territory, huffed and puffed their way to a crucial score on 70 minutes with Williams scoring his second after sustained pressure in the Chob red zone. Conversion added. Chob tried valiantly and threatened the Maidstone defence and were offered a golden shot at redemption when a high tackle on 78 minutes in the home 22 saw a penalty awarded. Agonisingly Thomson’s kick went wide and the chance of a draw was gone. Final whistle. Chob will rue this a match a one which they could well have taken something, but when conceding twice the number of penalties as your opponents, it will always be difficult to come out on top particularly as conditions worsened.

Next week is a home match against mid table Sevenoaks which coincides with the club’s annual charity ladies’ day.