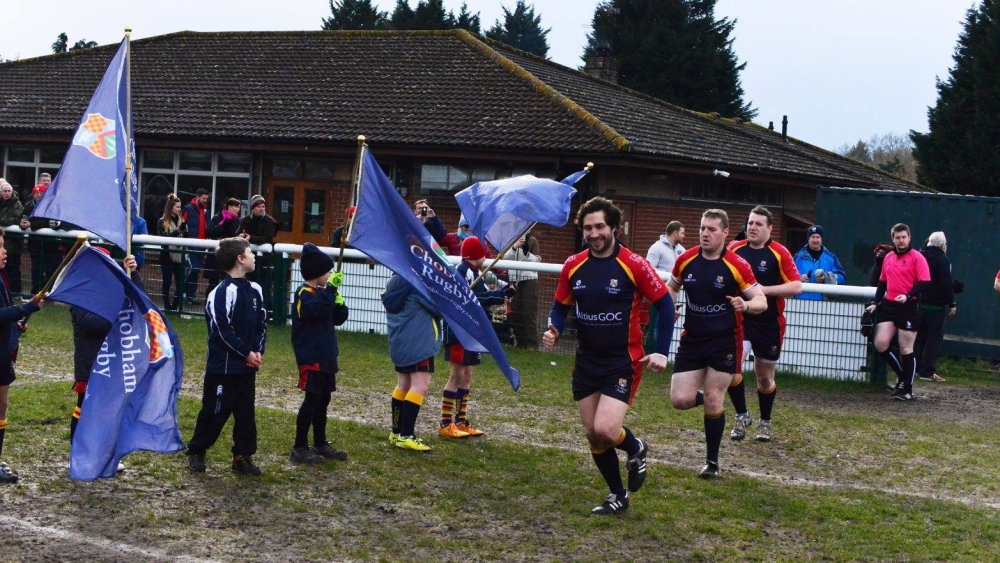 As the Chobham “Legends” enjoyed their inaugural lunch much was expected of the Chobham 1st XV as they enjoyed a home game, the first for over a month.

With Charlton park playing for their London 1 lives. Despite great performances against the league’s top two in recent weeks playing a wounded tiger which Charlton Park were was never going to be easy.

Chobham introduced a couple of youngsters, blooding them in. Prop Sam Gratton a former Chobham junior now involved with the Harlequins set up and Jason Lizamore a player currently in the Sharks academy, both only 18 and much will become of them in time. Added to this duo, young Ed Riley playing only his 2nd game. Chobham opened the scoring on 9 minutes through the ever vibrant Ollie Smith, he broke away from several tackles to go over in the corner, Alex Thompson missing the extra’s 5-0.

The visitors were never going to lie down and when you are staring relegation in the face, strange things happen. Sporting a 60-year-old in the front row, it all looked easy but I can tell you it was not and Mr Jacquet+ gave every player younger than himself a less in the game.

On 16 minutes Charlton Park took the lead a little against the run of play and several Chobham missed opportunities, chances at this level need to be taken. The visitors did and went 5-7 up. On the stroke of half time Chobham thought they had snatched a half time lead as Joe McVey went over to see the home side lead 10-7 but a minute later, sloppy defending allowed that lead to go and Chobham trailed 10-12 at the turn round.

The second half did not begin well and a shock in terms of league position was very much on the cards as Charlton park extended the lead on 55 minutes to lead 10-19 after a converted try. Chobham needed to get back on their game and despite many efforts for both sides it looked like a defeat was on the cards. On 68 minutes Chobham began to look better and when Jayde Cruickshank broke through to score in the corner the gap narrowed to 4 points but when Charlton park slotted over a penalty the visitors increased the lead to 7 points and a drew was the best that Chobham thought they could get.

In a 10-minute period that saw Mighty Chobham at their best, defending like lions and attacking like the all blacks, it saw Smith go over for his brace, the conversion was missed and Chobham still trailed 20-22. With the clock ticking down, the pressure mounting on Charlton Park they gave away penalty after penalty on their line taking yellow cards in the process. Time was up but they continued to infringe illegally as Chobham mounted attack after attack, finally a penalty aware to the left of the posts prompted Chobham to go for goal, Thompson who had missed all previous 4 kicking attempts and needing this to secure victory strode up manfully and put in between the uprights. Joy for Chobham and the legends, despair for Charlton Park. A hard fought victory 23 points to 22 and to cap it all, it was a bonus point win for 4 tries. Next game is after the International break on Saturday 19th March away at Chiswick.