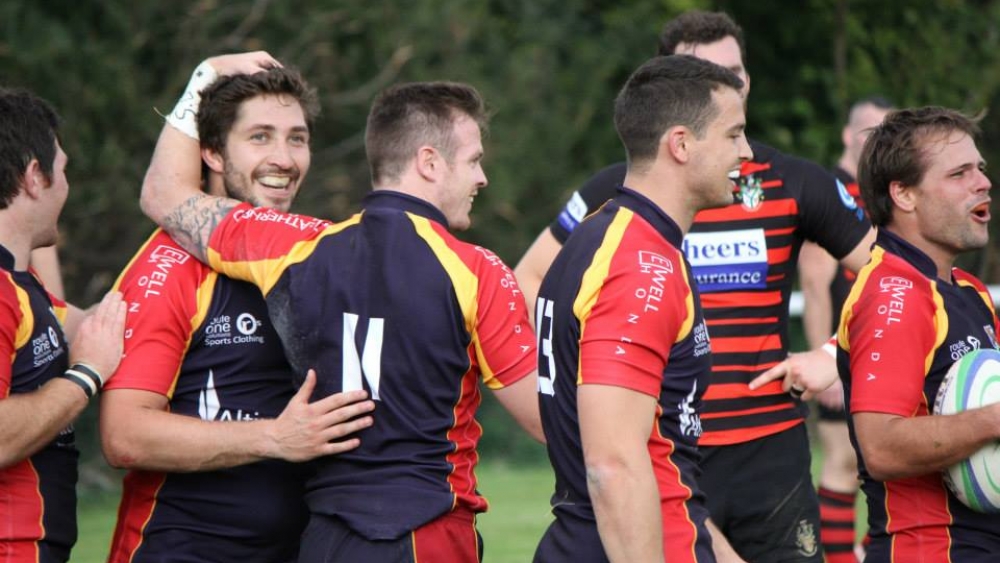 Nigel Guy Director of Rugby shares a match report:
Under blue skies and with rising temperatures a large crowd greeted the teams at Fowler’s Wells. With the Chobham minis hosting the pre match lunch and forming a guard of honour there was a youthful feel to the afternoon. Indeed both sides were proud of their record of young player development. Chobham made one change to the starting line up from the win on the road at Havant. Number 8 Dave Askew returned to the line-up for the first time since November and Tom Riley, Mike McDonald and Lewis Manning came onto the bench. League newcomers Twickenham came into the match full of confidence after their drubbing of Cobham the previous week and on the back of a long unbeaten record which secured their promotion. With two teams known for their attacking rugby the spectators were in for a treat.

The opening encounters were played at pace with Chobham conceding two early penalties and a free kick as referee Mr Boulanger immediately made his intentions clear. Fortunately for the home side, the visitors were unable to take any advantage of the infringements.  Nevertheless, Twickenham were looking dangerous requiring Chob to be very alert and strong in the tackle with skipper Tony Paul leading the line well. On 13 minutes wing Josh Devitt broke through only to be brought down deep in the visitor’s 22 but despite some cagey play from both sides, Chob were getting into their stride. It was no surprise when on 13 minutes they opened their account. From a tapped free kick, prop Sonny Kuwana led the charge followed by Ryan Gregory and Angus Hamilton. When the ball reached Ben Sims on the burst he barged his way over to score the try. James Dunne’s conversion was short. Chobham 5 Twickenham 0. With 25 minutes gone Sims came to the home team’s rescue as a sharp Twickenham attack looked threatening. However two minutes later Dominic Brown opened the visitor’s account with a well struck penalty from 40 metres. Chobham 5 Twickenham 3. With the mercury rising, the pace remained high and the crowd expectant. The next score came from Chob and a superb team effort it was. With forwards and backs linking at pace, that man Sims was heavily involved again and a return pass saw him accelerate through a gap to touch down. Dunne converted. Chobham 12 Twickenham 3. With the crowd now looking for Chob to increase their lead, they were hushed by a shock Twickenham score. With the home side pressing, left wing Michael Buck gambled and the dice rolled correctly as he intercepted a pass and ran 80 yards down field to score under the posts. Brown added the extras. Chobham 12 Twickenham 10. Half Time.

As both the players and the crowd refuelled after an enthralling half of rugby, the thinking in the cool of the home dressing room led by coaches Gregory and Paul was incisive and determined. The message was to tighten up the play and restrict the very open game that well suited Twickenham’s style. Earn the right to go wide was the Chob mantra as the players re-entered the arena. On 46 minutes the power play of the Chobham pack was put into action. From a well-executed line out catch and drive, the forwards rumbled and replacement front rower Tom Riley emerged with the ball to claim the score. Dunne made a tricky conversion look easy. Chobham 19 Twickenham 10.  Just 3 minutes later a superb team try increased the lead. With the move started by the livewire Hamilton who made yards with a midfield break, the ball was then moved through many pairs of hands before finding speedster Devitt who opened his try account and secured the bonus point. Dunne was wide. Chobham 24 Twickenham 10.  Devitt added his second shortly after following a superb break from the back of the scrum by Askew. Harry Guy added the extras. Chobham 31 Twickenham 10. With three second half tries Chobham were now on fire and the visitors were visibly wilting at the physicality of the home team’s play. Livewire scrum half Ian Barnes who had been busy all day, nipped over for his first try of the afternoon on 66 minutes. Chobham 36 Twickenham 10.  With 4 minutes remaining on the clock a carbon copy of the catch and drive again saw Riley emerge from the pile up with the ball to secure his brace and Guy’s excellent conversion added the gloss. Chobham 43 Twickenham 10. To their credit the visitors came hard at Chob in the remaining minutes but the excellent Mr Boulanger, blew his whistle and, with the players exhausted brought proceedings to a close. Full time Chobham 43 Twickenham 10.

This was a humdinger of a contest which was a credit to both sides. After the tail off at Havant the previous week Chob knew that that they needed to play for 80 minutes and the second forty particularly in such hot conditions was highly impressive in both its composure and execution.  Twickenham are very useful side but on the day Chob just had too much power. With two from two, the coaching team of Gregory and Paul, will be upbeat about next week’s trip to Surrey rivals Sutton & Epsom. Remember last October, S&E crashed Chob’s 22 match unbeaten run, so there will plenty of motivation for the Fowler’s Wells men to set the record straight and keep the current 8 match winning streak going.