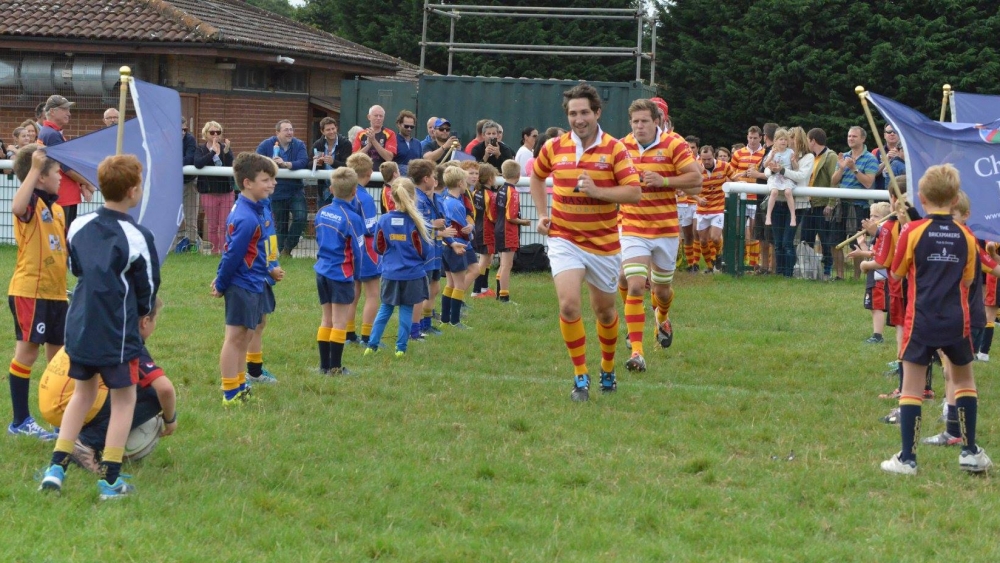 Chobham sponsored by ‘Basalt Global’ looked forward to this home game against local rivals Cobham against a back drop of ChobFest, a club wide festival of rugby to mark the 50th anniversary season of the club. With both clubs’ highly successful mini players showing great skills in the curtain raiser, the gauntlet was thrown down to the respective 1st XV’s to deliver the main course. With Tom King unavailable, Chob welcomed Euan Buckland back to the match day squad after 6 months in New Zealand and Callum Edwards came in for the injured Josh Devitt. As last week, play was going to influenced by yet another strong breeze blowing end to end. Similarly Chob had first use and again it was important that come the half time break, the advantage was taken with probably 7-10 points being the value. Chob soon got going and a break by Ollie Smith set the tone for a period of Chobham pressure which led to a penalty from Alec Thomson which got the scoreboard moving for the home team. The visitors then responded and some brilliant work by Liam Monaghan rescued a tricky situation before Chob settled into an encouraging pattern and started to build territory and possession inside the visitor’s half.

With Chob now starting to ratchet up the pressure on the Cobham try line it looked like a score was inevitable particularly after a barnstorming break by centre Jayde Cruikshank, but with the pass not going to hand the chance was gone. So it was very much against the run of play when the visitors opened their account. With Chob in possession in the Cobham 22, the ball ran loose and missed tackles allowed a break out and following a frantic kick chase, the ball was eventually moved wide to wing Ollie Kitto to touch down out wide. No conversion.

Chob responded quickly as a box kick was fielded and moved across the line into space and Cruickshank powered over for the score. Thomson added an excellent conversion and Chob moved ahead 10-5. This was now the time to kick on a with the visitors down to 14 following Mr Charolais’ first flash of yellow, but despite a series of drives and surges at the Cobham line, the defence held in tact and Chobham came away empty handed. The failure to add to the score was compounded with a yellow card for Lee Evans and both sides were down to 14. However, a Cobham incursion into the home 22 yielded a powerful scrum which enabled centre Charlie Mortimer to touch down. Half time 10-10. For the second week running, Chobham had been with the elements and well on top for 25 minutes but had failed to convert the territorial supremacy into a commanding lead. Would this hurt them again?

Again Chobham started positively and the half opened evenly although the wind gave the visitors the ability to get a firmer foothold in the match with their forwards starting to gain the upper hand. Mr Charolais, whose whistle was now starting to blow more frequently, but not necessarily to either teams’ pleasure, then issued his third yellow card of the afternoon to home lock Joe McVey and all of a sudden Chob found themselves briefly down to 13 men. Cobham relished this opportunity and although the rear-guard held firm the balance of the game was clearly moving in their favour.

Chob’s pleasure at being back to full complement was short lived as a dummy runner clattered into the newly anointed Centurion, Tony Paul, way ahead of the ball but much to the home supporters amazement the referee flourished his fourth yellow of the afternoon and the Chobham skipper was sent to the bin. Cobham seized the opportunity and used the extra man to put wing Kitto in for his brace and with Weir adding the extras, the scoreboard moved away from the hosts. With 10 minutes left Weir added a wind assisted long range penalty with a well struck kick and the visitors comfortably saw out time to record an away win. Full time Chobham 10 Cobham 20. Whilst Chob can feel aggrieved at a key decision that went against them, the reality is that the first half generated sufficiently good field position and ball to have built a commanding lead. The failure to take advantage of this plus the inability to play for the whole 80 minutes is something the coaches will be working on ahead of a vitally important trip to Dover next week.