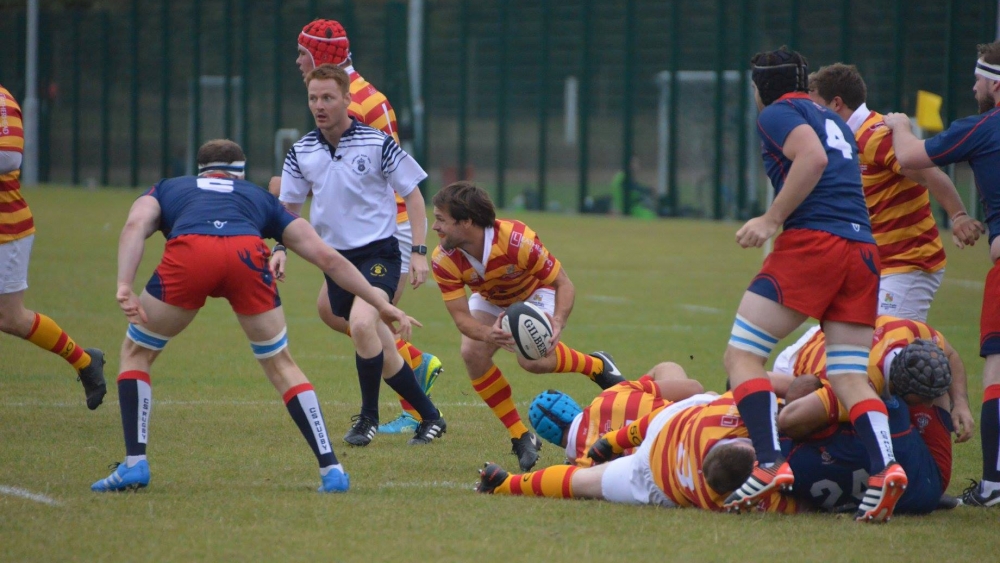 Chobham sponsored by ‘Basalt Global’ came into this tough away game against early league front runners CS Rugby 1863 with improved confidence after registering their first victory the previous weekend.

With Ollie Wakefield unavailable, Leon Nell stepped up from the bench for his first start and Lee Evans and Tom King both returned to the starting line-up. The Indian summer had disappeared and the players were greeted by grey skies and a strong, northerly wind blowing from one end of the pitch to the other. Chobham had first use of this and it was important that come the half time break, the advantage was taken with probably 10 points being par for the benefit. Chobham started in electric fashion with the ball moving through the hands and an outside break from Josh Devitt creating an opportunity which was held up short. CS infringed twice near their try line and on the second occasion Alec Thomson made them pay with a straightforward penalty. With Chobham sustaining this intensity, CS were forced on the back foot and as the penalty count rose home open side Mike Smith tested referee Mr Priestley’s patience once too often and saw yellow.

Chob continued to press but a missed penalty and a series of line out drives that were repulsed by committed home defence left a nagging feeling as the clock ticked towards half time. On 30 minutes Chobham prop Sam Grattan fell the wrong side of Mr Priestley and CS took advantage. With the clock nudging 40 minutes, a well-executed catch and drive rumbled over with hooker Josh Forrester claiming the score. Kicker Tom Hodgson nosed CS ahead at 7-3; half time. With the game in the balance, it was important that Chob were focussed right from the start with the wind now in their faces, but the game was effectively killed off in the 42nd minute as two missed one on one tackles eventually allowed home wing Josh Heslop to score which Hodgson duly converted from straight in front. 14-3. CS then grew in confidence as skipper Will Scott and prop Darragh Kelly carried well and with the wind preventing Chob making much headway with the boot when needed.

So in a mirror image of the first half the side with the wind at their backs dominated and only resolute defence coupled with some excellent work over the ball from the Chobham back row of Smith, King and Brown stifled the CS attack and kept the try line intact. In return CS’s defensive efforts prevented the Chobham pack delivering any front foot ball and with their back line lacking any real penetration, the game petered out into an attritional contest relieved only by another well struck Hodgson penalty to nose CS further ahead at 17-3. With CS remaining top, Chob can take some comfort from this close result but can also learn from a CS side which displayed greater efficiency and accuracy in their play.

Next Saturday 24th September Chobham are at home to local rivals Cobham as part of the 50th anniversary CHOBFEST weekend.