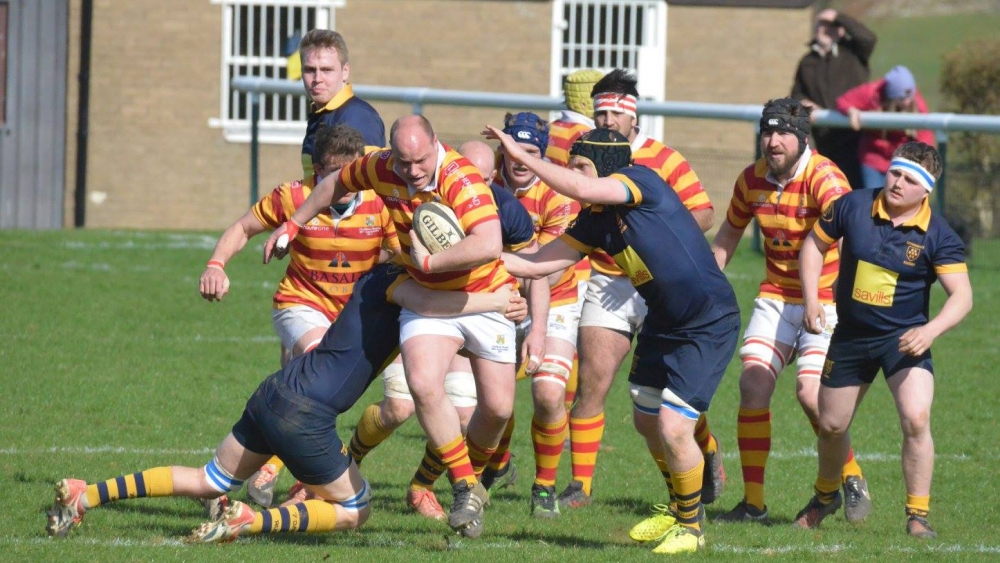 More sun greeted Chobham as they ventured away from Fowlers Wells this week after their Surrey trophy victory over Camberley last week as they made their way around the M25 to Kent yet again for a London 1 South fixture. Just across the Surrey / Kent boarder Chobham headed to Sevenoaks RFC and were faced with gale force winds directly down the pitch which were to have a huge impact on the game from start to finish, but most definitely not as many would have expected. In an error strewn first half Chobham were able to gain many good field positions with the wind at their backs but stringing more than a couple of passes together proved nigh on impossible for the away team during the first 40 minutes. Passes would wobble and drift away from their desired target and this allowed the home side to apply real pressure with their defense. This unfortunately prompted Chobham to deviate from their initial plans and force things that they usually wouldn’t in attack. Sevenoaks however were clinical and direct playing in to the wind and Chobham’s defence let them down on too many occasions to allow the dangerous Sevenoaks ball carriers to make considerable in roads towards the try line. With the home side scoring 3 unanswered tries, 2 with conversions and Chobham only able to respond with one penalty from the boot of returning fly half Alec Thomson, the score at half time, 19-3. So to the second half and from the get go it was Chobham who were in the ascendancy. Through increased intensity and far more accurate ball retention they found themselves camped in the home sides 22 and it wasn’t long before Ollie Smith crossed for Chobham’s first 5 pointer which was duly converted by Thomson. 19-10, game on, or so the visitors thought. Again and again Chobham worked tirelessly in attack of Sevenoaks’ try line but unfortunately errors in judgement and accuracy allowed the home side to run in a converted breakaway try to re-establish their 16 point lead. Surprisingly, it was now Sevenoaks who were finding it increasingly difficult to find a foot hold with the wind at their backs and it was Chobham who began to pick holes and gain yards with increased regularity. The pressure again told and replacement back row, Jerry Rumble on his return from Exeter Uni, darted over from a yard to get Chobham back in the game once more. Again Thomson slotted the conversion to bring the score to 26-17. Again the kitchen sink was thrown at the hosts by Chobham but they were faced with resolute defence and whilst in desperate search for the next try to get themselves back within just 2 points, Sevenoaks took advantage of the inevitable space in behind and once again showed a clinical edge when given an opportunity, once again it was converted and the score was 33-17. Undeterred, Chobham did everything they could to get back in to scoring positions but with the clock ticking down could manage just one more unconverted score from inside centre Dan Mays to make the score 33-22 at the games close. It was a frustrating afternoon of missed chances and defensive errors which cost Chobham dearly this week and another ‘game that got away’ in this season of frustrating away form from the Fowlers Wells men. There were huge positives to take from the reaction that the squad displayed in the games second half but nobody in the squad will be happy with their work in the first half which simply gave the side a mountain to climb in the second 40. Euan Buckland at open side flanker was Chobham’s best player on the day receiving the man of the match award but he too will be looking forward to being back at home next week against Tottonians. This gives the side the opportunity to get back to winning ways asap and coaches Ryan Gregory and Tony Paul are confident that they will do this.