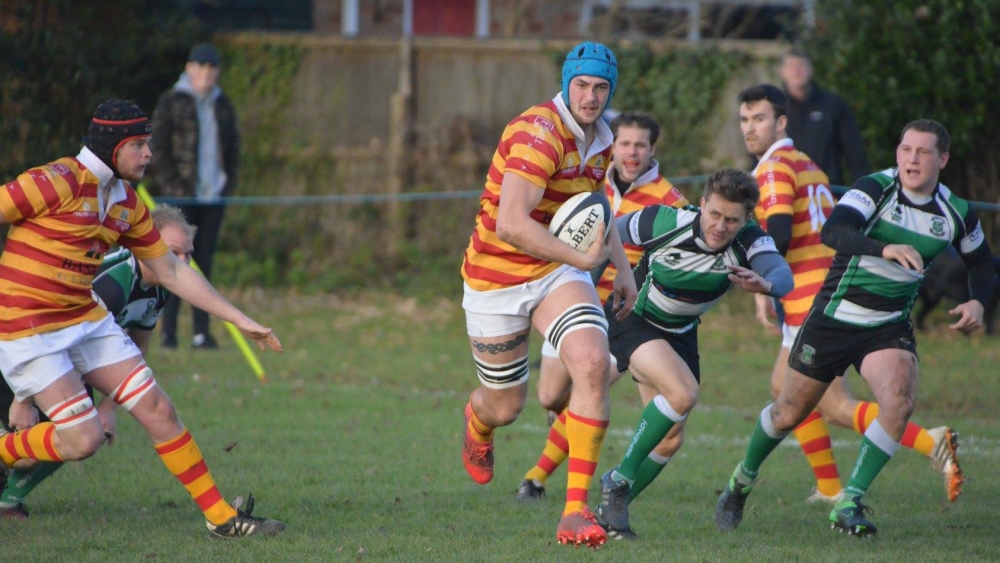 A year ago almost to the day, Chobham suffered an almighty defeat at the hands of Tottonians, this game was much different and Chobham almost turned the tables, but in the end, Totts just edged out this gallant display by the ‘Basalt Global’ sponsored Mighty Chobham.

Chobham went in front before most of the crowd had even taken their places as within one minute Ryan Gregory went over under the posts following a brilliant kick off reception by the Chob pack. The conversion by Alec Thomson was a formality and Chobham led, 0-7. Chobham – on fire and smarting from the performance a year ago went further ahead within five minutes with another converted try this time Rory Cariss going over and Thomson getting the extras. 0-14. Within minutes the lead was extended as long range expert Jayde Cruikshank sent a penalty through the uprights. 0-17.

Totts almost knocked out, got up from the canvass and fought back. The game, an entertaining one in such cold conditions, kept the crowd warm. Each side managing three tries a piece in the first period, but the Chobham superior kicking keeping them in front at half time 19-24. Chobham kept in front through more Cruikshank penalties and an further try that secured the try bonus point, Totts kept coming at Chobham, with minutes to go, Chobham led 35-31, they had a chance with another penalty to increase the lead but Cruikshank’s effort went just wide, however maybe thinking the job was done, Chobham let slip on their kick chase and from the missed penalty, they allowed the Tott’s outside centre to run 40 yards un challenged, this set up what was to be the last play of the game and from the attacking pressure and despite some stout effort by the now refocused Chobham defence, their mighty effort was all to be in vain as Totts showed why they were in the Top 4 as they scored a try to take them in front for only the 2nd time in the game, they broke the Chobham hearts as they ran out 36 point to 35 victors. At the end, and in the team huddle, skipper Ian Barnes laid the law down and asked for the players to take a long hard look at themselves as letting slip a game that they surely should have won.

Next week Chobham are at Home when they host high flying Havant – Kick off is at 2pm.