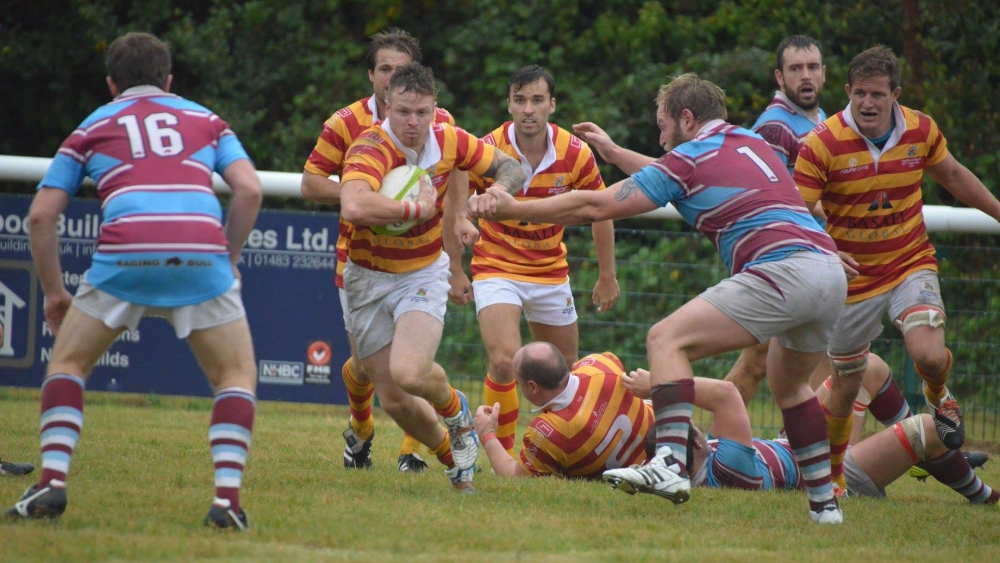 The opening home game of Chobham’s 50th Season saw the club stalwarts watch with pride as the side came out wearing club colours first seen in 1967, the side sponsored by ‘Basalt Global’ also produced a performance that firmly put the defeat the week before very much to the back burner.

A team that welcomed back Joe Mcvey coming in after his brush with Sea Urchins, Ian Barnes after the birth of his 3rd child (Congratulations to Brooke and Ian) and it also saw a league debut from the bench for Leon Nell who has waited patiently for his chance. Training in the week had been hard as the players wanted to rid themselves of the week before and they began brightly and had the lion’s share of possession, and also snuffling out the Chiswick threat at an early stage of their attack. On 11 minutes following a period of intense pressure and a series of lineouts and drives, a further penalty gave the chance t open the scoring and Alec Thomson duly obliged (3-0).

Chiswick began to get into the game a little and showed some areas of threat but the Mighty Chobham defence held firm, on 19 minutes a long pass from Chiswick fly half Hallett on the Chobham 10 metre line was intercepted by wingman Josh Devitt who was simply unstoppable, 1st try Chobham – Thomson adding the extras (10-0). The game ebbed and flowed with Chobham edging the half but unable to secure more points. Half time 10-0.

Chobham again started well and against the wind managed to stifle any Chiswick attack, on 52 minutes Devitt once again scored following some excellent work that began on the half way and went through the hands of Mcvey, Ollie Wakefield, man of the match Dom Sammut before eventually finding Devitt, Thomson scored the additional 2 points and the lead extended to 17-0. As time ticked away the win was never in doubt and Chiswick were really intent on not allowing Chobham to get a bonus point, but that was all in vain as a 5 -minute period starting in the 75th Minute saw the Old Chobham class and flair, during that time they ran in three more tries, the first after a Devitt break he passed!! And found hooker Wakefield on the right wing who went over, on 79 minutes Devitt scored his Hat-trick and secure a bonus point, to cap it all a final score by the outstanding George Matthews gave the home crowd much to smile about as they look ahead to some tough games in the coming weeks.

Next Saturday 17th September Chobham are away at league leaders CS Rugby and the following week 24th September home to Cobham as part of the CHOBFEST weekend.