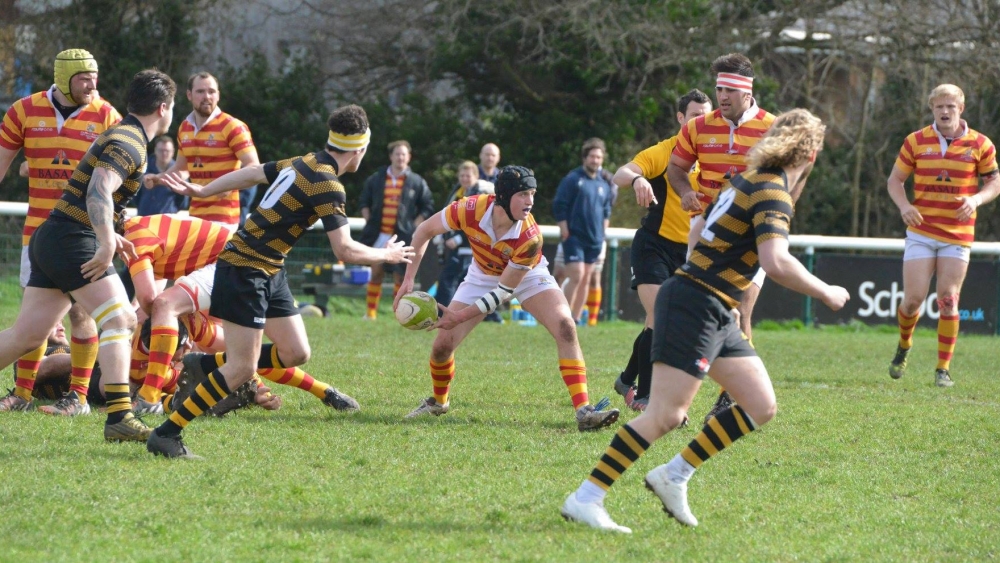 A blustery, over cast day at Fowlers Wells saw Chobham welcome their most local of rivals for a greatly anticipated Surrey Trophy semi final clash. Having not faced each other in a competitive fixture in recent seasons this local derby was sure to provide some extra spice, particularly with Camberley flying high in London 2 South West and Chobham less than happy with their current league standing in the league above. The visitors could smell blood and it was up to the hosts to ensure that they maintained their positive home record this season. Both teams made some changes from their recent league squads and Chobham were excited to welcome two more youngsters off the clubs youth development conveyor belt for their competitive debuts, both James Buchanan and Ollie Campbell taking their place among the substitutes for the encounter. The first 30 minutes of the game saw Chobham put in an attacking performance to savour and they challenged Camberley in a way they simply hadn’t faced for quite some time. The home team played with real pace, accuracy and dynamism in the opening exchanges and it was only a short period of time before the returning Owen Glover crossed for the games opening score. The pressure and attacking intent didn’t stop there from Chobham and with their young and relatively inexperienced front row in the ascendancy at set piece the flowing attacking play from the backs and excellent interplay continued to produce two more excellent 5 pointers from Captain Phil Williams and No. 4 Dom Sammut. All three opening tries were converted by Alec Thomson at fullback to make the score 21-0 within the first 20 minutes. A shell shocked Camberley rallied however and after Chobham conceded a cheap penalty were able to make their first dent on the score board, a well struck penalty from the outside centre made the score 21-3. Chobham responded by getting straight back in to their strides in terms of attack and young scrum half Sam King exploited some space around the breakdown to sneak over from close range, again Thomson added the extras and Chobham found themselves 28-3 up .

Unfortunately it was at this point that a few inaccuracies began to creep in to Chobham’s play and with just minutes until half time, they allowed Camberley in for their first try which was duly converted. Bringing the score to 28-10 at the interval. The challenge to the Chobham XV was simple at half time, continue to attack with the same intent in the second half but tighten up defensively as Caamberley were likely to through everything they had at them, the visitors did not disappoint and came out all guns blazing in the second. Before long the home side had conceded two tries, one of which was converted and found themselves under real pressure, the score now, 28-25. The pressure on the scoreboard had come largely from Chobham’s own mistakes and errors in judgment which had allowed Camberley field position and attacking opportunities, Under the posts Chobham were set the challenge of regrouping and ensuring that they got back in the ascendancy.

A buoyed Camberley continued to apply real intensity in both attack and defense but as soon as Chobham were able to encroach in tho their territory once more, Alec Thomson was given the opportunity to extend the lead by 3 points which he JUST about managed. Under more pressure from the visitors it wasn’t until the very last play of the game until Chobham were completely safe thanks to an interception and 70 metre dash to the try line for Winger Callum Edwards, with the extras again added, the final score was 38-25 to Chobham. Chobham will be thrilled with the fluidity they showed in attack for the opening stages of the game but yet again they allowed a team back in to contention when they really needed to keep the pressure on and show more of a killer instinct. Chobham are now faced with the Surrey Trophy Final against Battersea Ironsides, on the 1st May at Esher Rugby Club as their final game of the season and an opportunity to collect some silverware in an otherwise inconsistent 50th anniversary season, a chance that the club will try to grab with both hands.