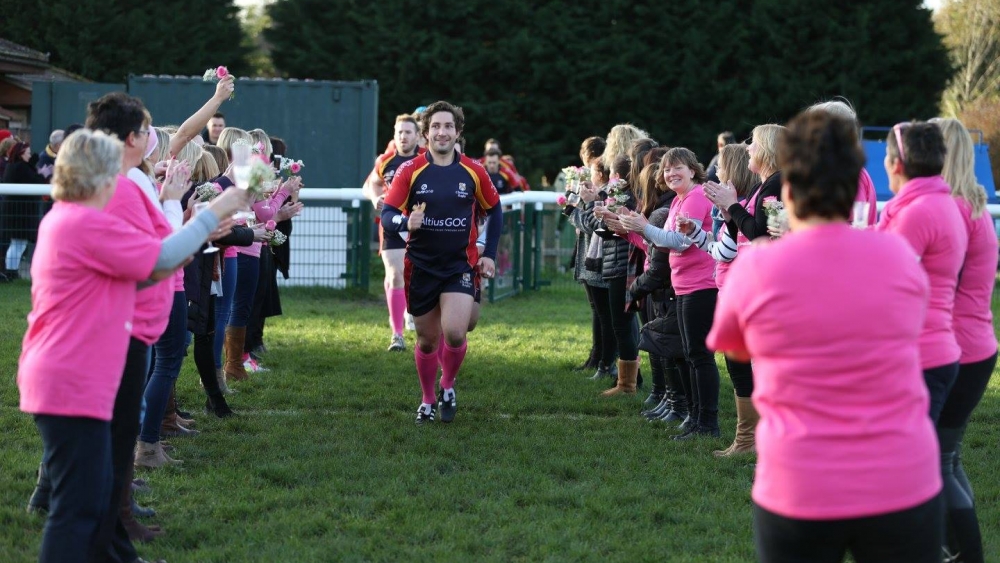 Chobham entertained Chiswick at Fowlers Wells in what can be best described as the first day of winter as an icy wind beset the ground, thank you to our Scandinavian friends! On a day that had been decreed Ladies Day the crowd was swelled by hundreds from the fairer sex. The day in aid of Breast Cancer Research was a huge success and huge praise goes to Josh Devitt and Jane Cross among the many that made it a great day all round. The players ran out through a tunnel of ladies all dressed in Pink. The 1st XV played their part in the day as they sported Pink socks and pink Breast Cancer warm up tops. Chiswick were a bit of ‘an unknown quantity’ as they had only been promoted this season and the two sides had never met before. Chobham hoped to build on last week’s win at Charlton Park, Chiswick on their victory over Havant – the Chobham nemesis! Playing with the wind Chobham looked to begin well and set their stall out. Chiswick within minutes of the start were replacing one of their props who took a blow to the head. Chobham should have been points up within 5 minutes as they camped on the Chiswick line, but came away empty handed. It was not until the 15 minute that Chobham began to really take control of the half and their opening try finished off by full back Phil Williams, 5-0.

Chiswick were further disrupted when they lost their replacement prop midway through the half, this also caused Chobham some issues as they had been totally dominant in the scrum, now with uncontested scrums it gave both sides an equal footing at the set piece. Chobham needed to press on and went further ahead on 26 minutes when Big Powerful centre Jayde Cruickshank went over for his 1st try of the day, Liam Monaghan once again on kicking duties added the extras, 12-0. Josh Devitt added a further score on 30 minutes and Chobham led 17-0.

Chobham at times get sloppy in allowed Chiswick back in with a try on 36 minutes when their defence faltered, 17-5. From the restart Chobham pressed on again and on the stroke of half time Devitt scored again, Chobham took a 22 point to 5 into the break. Chobham began the 2nd period well and went further ahead on 50 minutes through an Ollie Smith try, extended again on 53 minutes when Cruickshank went over for his 2nd, both tries were converted by Monaghan and Chobham led 36-5.

The next 20 minutes saw Chobham go into a very small shell and their performance was equally worrying, they gave away constant penalties, allowed a Chiswick to get some hope of pulling the game back and whilst this latter comment was never on the cards the players must question their performance in that 20 period. Chiswick pulled one try back 36-10, Chobham had Tom King sin binned for not rolling away following a series of 8 penalties in the Chobham red zone, Devitt yellow carded for a high tackle that would normally only receive a warning. So matters were not looking great and down to 13 men it gave Chiswick more confidence. The final 10 minutes saw Chobham re-group and re-focus and they had the final word as Smith scored again on 80 minutes, the try converted by Lawrence Elliott – a Chobham win 43-10. In the end it was justified but they must question that 20 -minute lack lustre period.

Next week Chobham travel to Sidcup with huge points on offer!