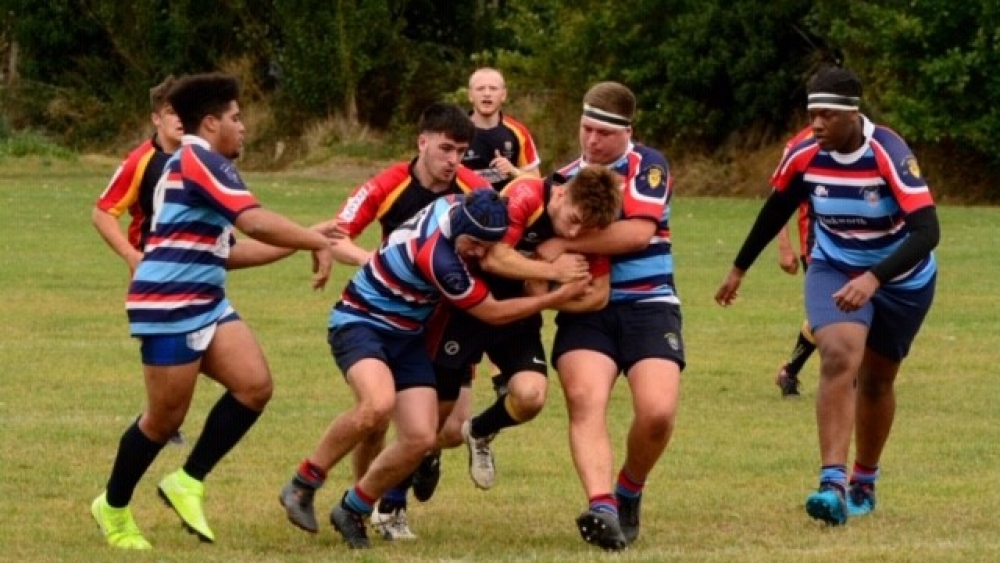 Chobham’s class of 02/03 reached the top step of junior rugby on Sunday with a trip to Esher Colts (U18s) 10s as a curtain raiser for the new season. With a squad of 21 to play as two teams in this unfamiliar format the day would always be tough introduction added to which the entire squad was drawn from the Under 17 group the physical challenge would be a testing one.

The lads were organised into A and B for the group stages, and coach Simon Hemsworth’s day was challenging from the get go as both had matches at the same time.

Team A faced Esher in the first 7 minutes each way match, and kept a pretty lumpy side at bay before mounting their own challenge. From a loose ball at a lineout Chob reacted first and hands from Jack in midfield gave Matt the space to open the scoring out wide. Esher responded immediately and drove at the Chob’ defence drawing a couple of penalties before a very quick tap beat the defence and it was 5-7 at the break.

Chob scored again with Matt finishing out wide from Doug drawing the last defender to regain a 10-7 lead. Again Esher respond quickly and hacked a loose ball through. A possible obstruction on the defender wasn’t called and a good conversion from wide made the score 10-14.

The remainder of the game was Chob’ trying to force a way over to nick the result. Chob’ nicked a lineout but the game finished with Saxon squeezed into touch 5 yards short and Esher had held on.

Meanwhile…on the next pitch team B faced Haslemere, probably even ‘lumpier’ than Esher. Maybe they were but Chob’ used pace to get close early on, with Olly on the hoof to get to 5 out. Good ball retention gave Oli the chance to finish off from a yard or so out and Chob’ were leading here too. Haslemere got their ball carriers into play soon after to hit back and took a 7-5 lead at half-time.

In the second period Haslemere wanted an arm wrestle but Chob stood firm and were able to breakout on a couple of occasions. From the first an attacking ruck 15 yards out, Harry snuck through the narrowest gap to retake the lead. In the final moments Chob held firm at a scrum near their line and broke free again. Lewis hacked downfield a couple of times and the defence couldn’t dive on the ball before he was able to follow up and Chob’ had won 15-7.

There was no time for a rest as team A had an immediate turn around against Sutton & Epsom. The half started really well as the boys had an attacking line 5 out. A cheeky throw to the front for Dan to barge his way over. 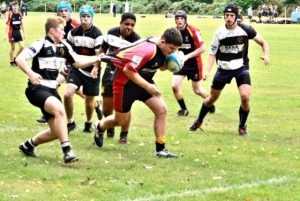 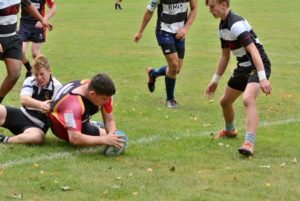 It got better soon after as Saxon had room to get outside his man and score by the posts for a 12-0 lead. Just on half-time Sutton were able to create space for themselves and closed to 12-5 at the break. The second half was a defensive shift as fatigue from two games started to bite. Aran, Fin and Matt all made vital tackles but from a turnover close to the Chob’ line Sutton levelled at 12-12. From the final play the Chob’ defence was breached as a loose ball was gathered to give Sutton the victory at 12-19.

So, back to team B who now faced Old Emanuel and the small squad was starting to creak a little with several players doing a job in both sides. OE scored first as Lewis made a despairing tackle but an offload got them over. OE went over again out wide before the break as the Chob’ defence ran out of numbers but the lads were undaunted.

The second period was more of the same as the lads played proper man up rugby to drive the OE runners back. 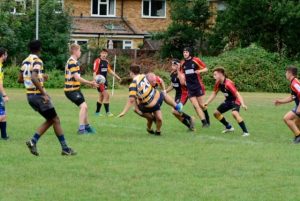 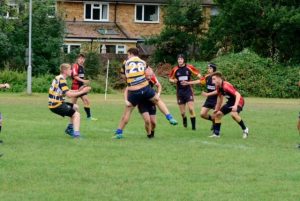 They got their reward late in the half as an attacking ruck in the OE 25 saw their blind side defence go to sleep. Teo was sharp at the base to dart left and go over unmolested to cut the score to 5-10. Harry was over from short range again as Chob’ sniffed a second win with Fin adding the extras to go 12-10 up, but OE pressure told at the death as they were able to use the space wide out after being held up trying to rumble over and it finished 12-17.

It was team B to turn around immediately against a London Irish squad with hardly any recognisable faces from last season. This proved a game too far as friendly bounces and having to defend around the tackle sapped the energy from the boys in blue. A final score of 0-32 certainly didn’t reflect how the lads stood up to the physical challenge.

The final group game for team A was against Reeds, who again looked to pose a big physical threat. It was Chob’ who scored first however as Aran found a gap and just had the legs to go over under the posts for a 7-0 lead. The scrum had Reeds under pressure but the greater pace out wide meant that Reeds had a 12-7 lead with a minute or two left. Mental fatigue then probably took control as a loose kick pass was snaffled by Reeds and they closed out the game 19-7.

With the loss of several players to injuries, to Chobham and other squads, the final game was a combined squad match against a second Sutton side. Sutton had a guy with real pace and used it well with a kick through to lead 7-0. Harry was again sharp at scrum half to get into Sutton territory but Chob’ couldn’t create the space to hit back in the first half.

The final 7 minutes of the day started well with Jack pinching the restart and Ben and Saxon putting Chob’ on the front foot. Sutton were rattled and a high tackle led to Chob’ having half a chance on the right wing but Jack was shepherded into touch just short. 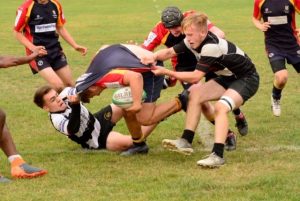 Chob’ were finishing the better as things got a little heated with Chob’ searching for a final score. The ref called time with Chobham just short as tempers frayed and Sutton held on 7-0.

So, a first taste of Colts rugby for the young squad, with all but a couple of them still sixteen. It’s easy to say the results aren’t important, but playing a new format, against squads who all carried the physical advantage it’s credit to all as they didn’t shirk for a moment and no scores came from being bullied in the close exchanges.

Next week it’s back to 15-a-side with a trip to Effingham & Leatherhead. 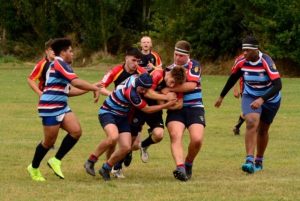