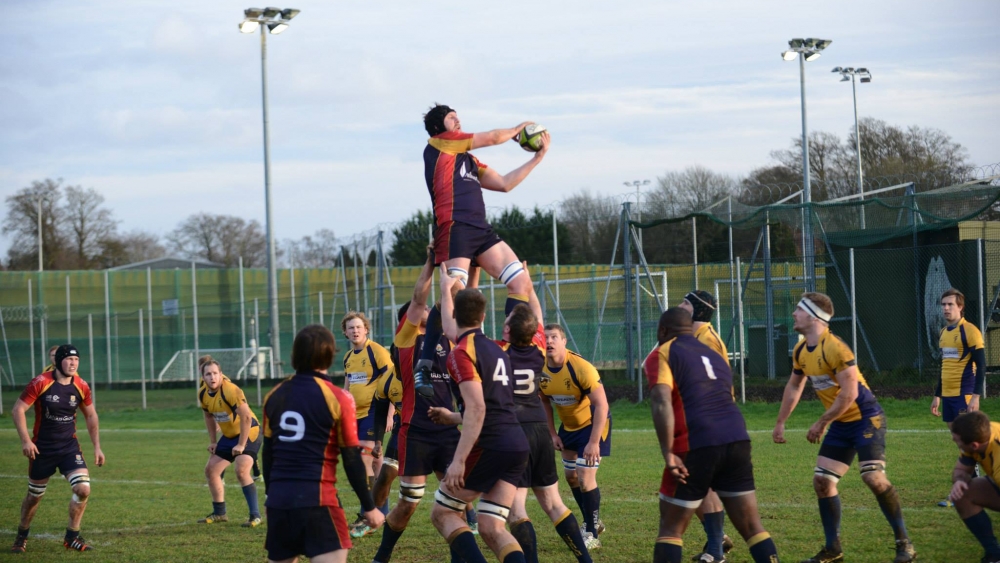 Chobham sped down the M3 to take on former National League team Basingstoke quietly confident on the back of a 5 match unbeaten run and a thrilling victory over form team S&E the previous week. Hosts Basingstoke were not to be underestimated. They are the only side to win at Fowler’s Wells this season and barring an RFU points deduction would be sat comfortably in mid table. With the two sides above third placed Chobham taking each other on, it was an opportunity for the Surrey side to keep right in the promotion mix if the result was a positive one. The team sheet saw Ollie Smith and Euan Buckland return to the back row and Harry Guy moved to the 10 shirt in the absence of Alex Seers. Ollie Wakefield stepped up to the bench for his 1st XV debut. Conditions would be a tricky with a very strong cross wind and heavy going underfoot likely to influence play.

Play began and it was the visitors who dictated the opening phases, although the host’s energetic and effective defensive shape precluded few material gains in the initial encounters. The first scrum on 7 minutes drew Chob pressure with number 8 Ollie Smith prominent. The deadlock was broken on 14 minutes. A ‘Stoke offence allowed a Chob lineout deep in the home territory. A perfectly executed catch and drive allowed the Chob pack to rumble on and hooker Adam Blemings was driven over the whitewash for the try. Conversion attempt by Guy was wide. Basingstoke 0 Chobham 5. Chobham looked set to increase the lead shortly after, as Smith broke away and off loaded to winger Liam Monaghan, but a last ditch tackle from Rilwan Lawal prevented the try. With a quarter gone, the pattern was being established with Chob, prompted by the effervescent Ian Barnes, seeing plenty of controlled possession but too many small errors in the red zone were keeping the score to the single try. On the other hand, the hosts were defending the gain line well but were unable to gain a foothold as their set piece and particularly their line out was misfiring. The Chob machine continued to function well. Josh Devitt looked increasingly lively with centres Tony Paul and Ben Sims making plenty of dents in the home defence. With the heavy brigade of Sonny Kuwana and Lee Evans also getting in on the act, another score looked imminent. On 38 minutes it came as Devitt sprinted through the gap to score a well-deserved try. Guy converted. Basingstoke 0 Chobham 12. Half time. Head Coach Ryan Gregory and his assistant Tony Paul would have been pretty pleased with the first half’s work. With the set piece functioning well and Euan Buckland and Lewis Manning wining the tackle battleground, the backs were seeing plenty of ball. Although the conditions added a factor of difficulty, an increase in the level of accuracy would be needed to close out the game and take the bonus point in the second half. The half opened perfectly for the visitors. Showing excellent ball retention and control, forward bursts led by Kuwana and Barnes created the opening for lock Dom Sammut to crash over in the corner. No extras. Basingstoke 0 Chobham 17. With the excellent but crocked Manning being replaced by youngster Sam Forbes, Chobham were now on the hunt for the bonus point and on 52 minutes it came. With bodies piled up on the floor in the right hand corner, the Chob will o’ the wisp scrum half Ian Barnes showed footwork that would have made the Strictly crowd happy and tiptoed through the smallest of gaps to secure the extra point with his side’s fourth try. With Guy not adding to it the scoreboard read; Basingstoke 0 Chobham 22. With the job done the visitors took their foot of the gas and allowed ‘Stoke some possession and territory which they looked to capitalise on. They also benefitted from referee Mr James benevolence as he yellow carded Wakefield who had entered the fray earlier in the half and subsequently Paul for a deliberate knock on. Despite being depleted in numbers, the Chob set piece remained resolute and the scrum dominant making life very hard for the men in yellow. Eventually numerical superiority told and on 74 minutes ‘Stoke scored a deserved try as Jobi Kochonowski muscled his way over wide on the left hand side. Ryan Trevaskis made light of the gusty wind with a superb conversion. Full time; Basingstoke 7 Chobham 22 This was a thoroughly efficient performance from the Chobham side who controlled the first 60 minutes of the game with a confident assuredness that was evident to those in attendance. Chob’s all court game was too much for the competitive hosts who should have too much to stay in the bottom three for too long. The unbeaten run goes to 6 and with table topping Wimbledon beating Guildford, Chob move up to second spot. With the second string Cannons also recording a very convincing win at Basingstoke, the men on the Chobham omnibus went home very happy on Saturday evening. Next up Dover at Fowler’s Wells. A win on their travels to the Kent coast in early October set the tone but Dover are a nuggety team and Chob will need to be up to the mark next Saturday to secure the points and keep the pressure on the leading teams.