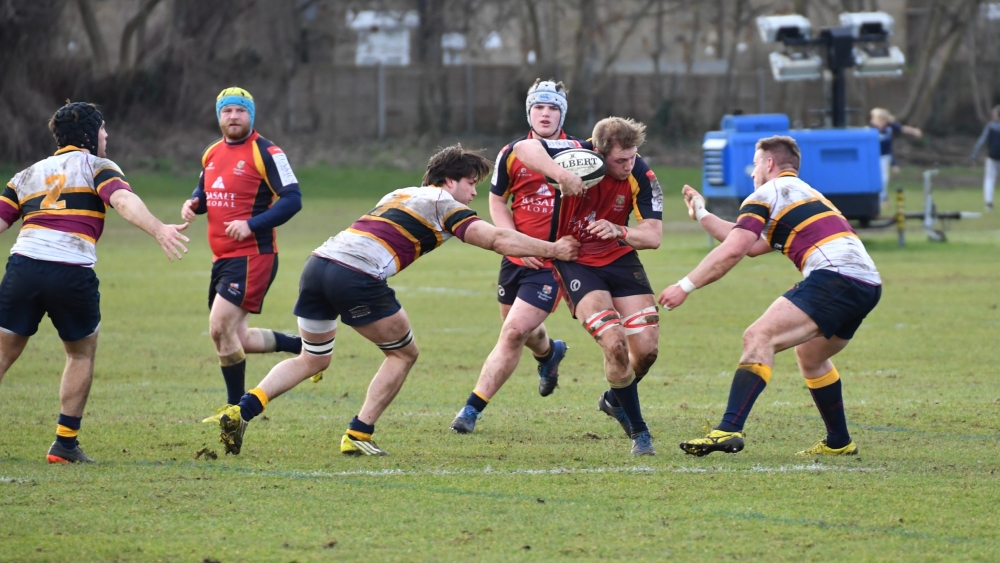 In a game that in all honesty Chobham possibly didn’t deserve to win, they let a winning position slip through their grip with the very last touch of the game after a sloppy breakdown indiscretion.   Travelling to Kent to play Old Colfeians, both sides were desperate to secure the win as OCs were currently third from bottom and Chobham 5th from the wrong end of the table and just 6 league points separating the pair.

With a much changed squad from earlier in the season, OCs were dominant for the majority of the first half.   However, much of Chobham’s defence was resolute.   However, the hosts were able to capitalise on good field position given to them from a penalty conceded by Chobham to score the first try of the game by way of a lineout drive mid way through the first half.   Having failed with the conversion but being successful with 2 penalty kicks, OCs went in to the break 11-6 up.   The only points that Chobham could muster had come from the laser accuracy of fullback Ollie Turner’s right boot.   In all honesty Chobham could count themselves lucky to have gone on in just 5 points behind. The second half was a much more evenly contested affair but to OCs benefit, Chobham continued to give away penalties and as they conceded their second yellow card of the game the home side were able to stretch their lead to 14-6 and then 17-9 as the sides traded penalty goals.   As Turner refused to miss from the tee and Chobham began to play more rugby and exert more pressure on the home side, he was able to add a 4th successful penalty to drag the deficit back to just 5 points at a score of 17-12.   10 minutes to play.   Game on. As Chobham increased the tempo of the game and their own intensity they began to pepper the OCs line and after having one try apparently held up over the line, prop Leon Nell was able to dive over close to the ruck for a 5 pointer.   Ollie Turner with the extra 2 and Chobham found themselves in front for the first time with just a minute or 2 remaining.   17-19. However, from the restart a number of Chobham forwards found themselves off their feet at the ruck to award OCs yet another penalty, 20 metres out, dead in front.   It was duly slotted between the posts with the last touch of the game to take the score to 20-19 and the home team snatched the all important 4 league points from the jaws of defeat.

The result mounts the pressure on the Chobham side who now face two more sides around them on the table over the next fortnight.   It’s do or die for the Surrey side if they are to remain in the division. Man of the match – 18 year old Charlie Head who has come through the club’s minis, juniors and development sides, made his 1st XV debut at hooker and worked tirelessly throughout the 80 minutes.   Having produced an incredible tackle count and never taking a backward step the MotM award was well deserved.   The first of many the coaches hope.