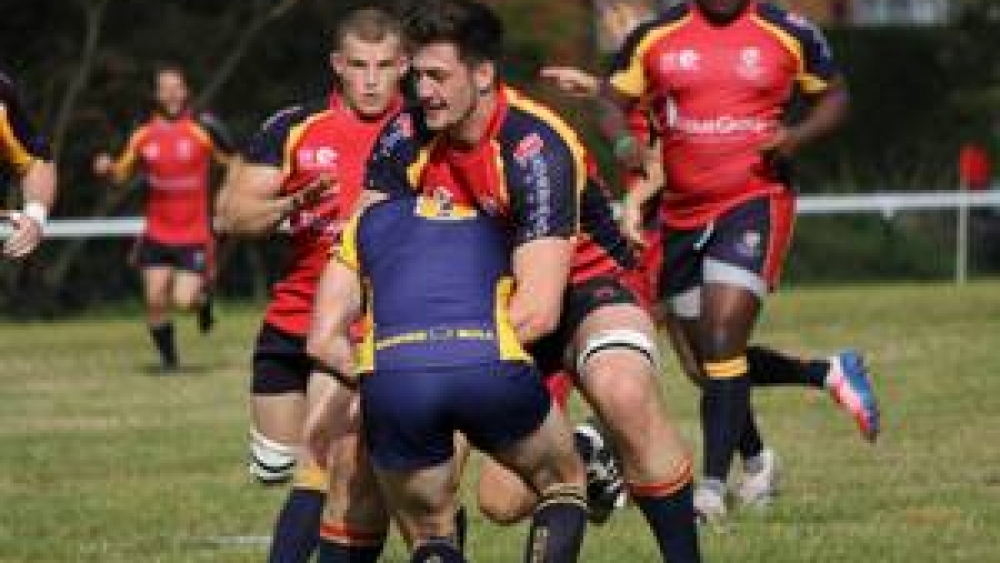 Visitors Basingstoke were going to be a good bench mark for Chobham’s progress. With the Hampshire club only just relegated from National 3, the Fowler’s Wells outfit knew they had to be at their best as B’s season was starting to crank into gear. The home team had four enforced changes following the away win at Sutton. The highly effective back row of Askew, Hamilton and Smith were missing due to a combination of work, injury and university and centre Ben Sims was also unavailable. Into the starting line-up came Tom Riley, Lewis Manning and Andy Walsh with Dan Mays making his first appearance of the season. A warm afternoon greeted the teams.

Chob opened the scoring in minute 1 as the kick off was misfielded by the B’s pack resulting in a straightforward offside. Dunne did the honours. Chobham 3 Basingstoke 0. Within 3 minutes missed tackles by Chob allowed B’s Matthew Guilfoyle through and he touched down. No conversion. Chobham 3 Basingstoke 5. The scoring continued as a smart interception by Chobham flyer Josh Devitt took Chobham into the lead which Dunne extended from the tee. Chobham 10 Basingstoke 5. Trevaskis narrowed the lead with a well struck penalty on 15 minutes. Play then remained locked in midfield as neither side could assert supremacy although Chob’s normally reliable kicking game was awry giving the visitors plenty of possession to run back. On the half hour mark, slightly against the run of play the home side extended their lead with their first piece of continuity. Devitt, Dunne, Riley and hooker Adam Blemings all combining well to send open side Walsh over the try line for an excellent team score. Dunne added the extras. Chobham 17 Basingstoke 8. Replacement Liam Monaghan then entered the fray for a limping Harry Guy and he was soon into action with a covering tackle. B’s pressure told and Walsh’s joy was short lived as referee Mr Gaynor took a dislike to his turnover and showed him an unfortunate yellow. B’s took advantage of their numerical superiority and wing Tim Richards went over the line. No extras. Chobham 17 Basingstoke 13. Half time.

Chobham would be disappointed going into the half time break. Coaches Ryan Gregory and Tony Paul would have been pleased with the set piece and in particular the scrum which had given them an advantage all afternoon but were concerned with the defensive shape and intensity and the inability to hold onto the ball for long enough to create pressure. They also needed to come to terms with the referee’s interpretation of the breakdown which had caused them problems in the first half.

Chobham opened the second half scoring with an excellent try on 52 minutes. A well-executed line out catch and dive saw Riley take the ball on. Dunne then found Mays on an arcing run and he went in under the sticks for a well worked try. Dunne added the conversion. Chobham 24 Basingstoke 13. But back came the visitors. Trevaskis again ran a smart line but poor tackling cost the home team a try. Conversion missed. Chobham 24 Basingstoke 18. With Chobham making too many errors, B’s sized the initiative and pressured the home team who were unable to get a foothold in the game. Replacement Euan Buckland made an outstanding try saving tackle as the visitors ramped up the pace and power. Devitt saw yellow in the left hand corner before the numerical advantage created an opportunity for Richards to bag the score. No extras. Chobham 24 Basingstoke 23. Game on. With Buckland retiring with a blood injury the depleted Chobham ranks were once again pierced as Richards powered over. Trevaskis converted. Chobham 24 Basingstoke 30. But back came the home team. End to end stuff. On 70 minutes, smart thinking by Dunne showed space from a 22 drop out. Devitt followed it up and scampered over to secure the bonus point. Dunne couldn’t add the extras. Chobham 29 Basingstoke 30. Still Chobham came again looking for the next score. On 75 minutes, another kick chase saw Monaghan use his gas before finding lock Dom Sammut who off loaded to the ever present Walsh to dived over for the score. Dunne knocked over the conversion. Chobham 36 Basingstoke 30. Surely that must be it? With the watch showing 78 minutes, hassled and harried by a frantic B’s defence Chobham gave possession away and after a series of close quarter drives were repelled B’s number 8 Gavin Hart muscled over for a crucial score which Trevaskis augmented. Chobham 36 Basingstoke 37. With the crowd breathless an enthralling game had a final twist. A Chobham scrum again put B’s under pressure and a penalty was awarded for deliberate wheeling. Although 40 metres out, Dunne’s effort glanced off the left hand post and was cleared to safety. Full time Chobham 36 Basingstoke 37.

For the neutral this was an enthralling and thrilling game with pace, power, drama and the unexpected. B’s showed real desire to win and with their power running and strength at the breakdown they showed their National League pedigree and made life difficult for the home team. Chob as ever looked dangerous in attack but uncharacteristically weak in defence. With a trip to Dover next week, there is every opportunity to set the record straight.