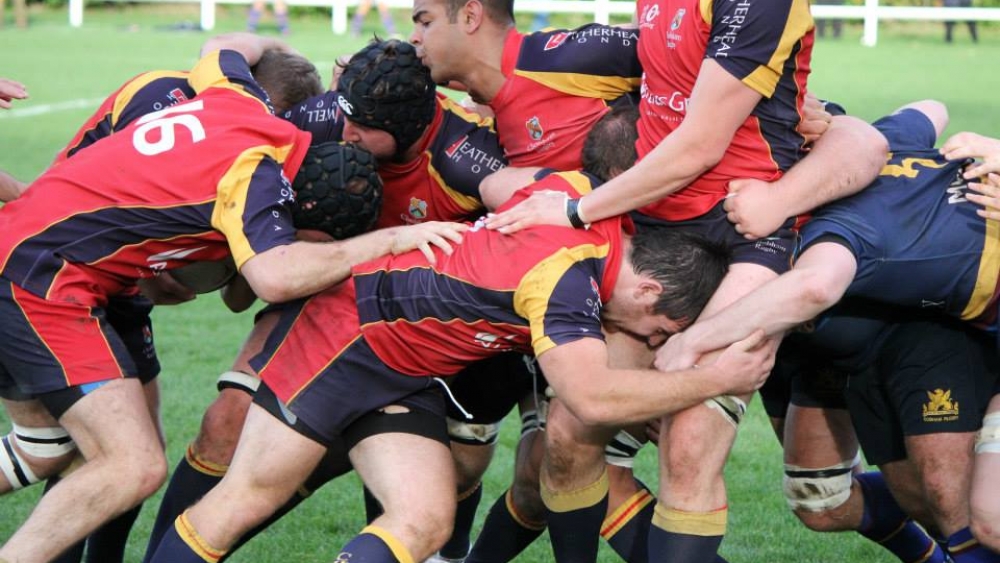 After the breathless excitement of last week’s local derby victory over Surrey neighbours Guildford, Chobham attention moved to the leafy avenues of Fairmile Lane and another cracker with long standing local rivals Cobham. The form book showed that Cobham were underdogs with only one win from the opening six games as new head coach Mike Cudmore bedded in his charges. On the other hand Chob with back to back wins were in good form, but the visitors knew that Cobham will always be well up for this derby game. Injury to Dan Mays gave Howard Turner his first start in the 13 shirt and influential number 8 Dave Askew also returned to the starting line-up. A warm breezy day and an immaculate playing surface greeted the players.

Chob were fast out of the blocks and created early pressure on the home defence but this was weathered and the home side saw plenty of possession. Chob showed their superiority in the scrum with a strong surge on 6 minutes which set the pattern for the afternoon. On 10 minutes, the visitors thought they had opened their account when will o’ the wisp wing Mike McDonald picked up a loose ball to sprint down the wing to dot down just ahead of the arriving Cobham defender but much to everyone’s surprise the referee who was some distance away deemed the touch down short and all the visitors got for their effort was a lineout which Cobham repulsed. This seemed to galvanise the home team and they started to come into the game as an attacking threat. On 25 minutes, number 11 Patrick Williams, off his wing, made a good line break taking play into the visitors’ 22 and lock Joe McVey was held out by some strong Chobham defence where the front row of Riley, Kuwana and Evans were prominent with their tackling. The game then got stuck in midfield as a series of errors and too much whistle prevented the flowing rugby that the players were trying to achieve. On 30 minutes player/coach Ryan Gregory then saw a flash of yellow and from the resulting penalty Cobham fly half Dave Flower at last got the scoreboard moving. Cobham 3 Chobham 0. This lead didn’t last long. Prompted by the effervescent scrum half Ian Barnes who covered every blade of grass, play was moved into the Cobham 22 where from a lineout well taken by lock Lewis Manning, a well-executed catch and drive saw the impressive Askew rumble over for the visitors first try. James Dunne was wide with the extras. Cobham 3 Chobham 5. Back came Cobham with blind side Doug Rodman leading the charge as he did all afternoon. A ferocious assault was launched on the Chobham try line but monumental defence with Gregory and Dom Sammut prominent vitally kept the line intact. Half Time Cobham 3 Chobham 5. Coach Gregory and his assistant Tony Paul would have been pleased with the defensive effort but disappointed that they had not been able to achieve the continuity they would have liked in attack. Holding onto the ball was important but also key was working out the rules of the breakdown area.

Cobham had chance to open the scoring on 45 minutes but a Flower penalty from distance was well wide but 10 minutes later they took the lead. A well drilled lineout was rumbled over from 10 metres and Josh Brown emerged from the heap with the ball to claim the score. No extras. Cobham 8 Chobham 5. With Chobham still not mastering ball retention and possession, and as a result getting little in the way of continuity, there were a few worried faces amongst the visitors’ supporters. But then on 63 minutes it all clicked. At last Chob went through the phases, holding and controlling the ball, getting over the gain line and turning the Cobham defence. With Askew becoming more prominent, this took them 70 yards up the field and great composure saw the ball delivered to Dunne who had popped up on the left wing to score the try. Nothing added. Cobham 8 Chobham 10. This score lifted Chobham who now started to turn the screw. 5 minutes later after scattering the home defence McDonald touched down only for Chobham to be awarded a penalty try as the official deemed a late hit to have prevented a score earlier in the play. Dunne added the two. Cobham 8 Chobham 17. The force was now with Chob. With confidence oozing and Cobham starting to look out on their feet the floodgates opened. Sammut turned over the ball, flanker Tom King broke through to make 60 yards, omnipresent Barnes was involved before Harry Guy put wing man Monaghan in space to score the bonus point try. Cobham 8 Chobham 22. Next it was that man MacDonald. Having been denied twice, a dropped ball was kicked through by Dunne with MacDonald winning the footrace to claim the try. Cobham 8 Chobham 27. 75 minutes, back came Cobham. Another line out catch and drive saw Gwynne claim the try. Flower produced a fine conversion. Cobham 15 Chobham 27. Last on the sheet was the Ulsterman Josh Devitt. Desperate to add to his tally all afternoon, the opportunity came when another dropped ball was snaffled by the flyer and he romped home. Dunne added the two. Final score; Cobham 15 Chobham 34. A breath-taking last twenty in a game that struggled for so long to get going. For 60 minutes Cobham’s performance belied their league position as they more than matched the visitors but despite plenty of possession and territory they struggled to put points on the board. However once they clicked Chob looked irresistible showing pace and power and importantly high levels of fitness to finish the game strongly with a bonus point win. Next up Wimbledon. Another mouth-watering Surrey clash between second and third placed clubs.