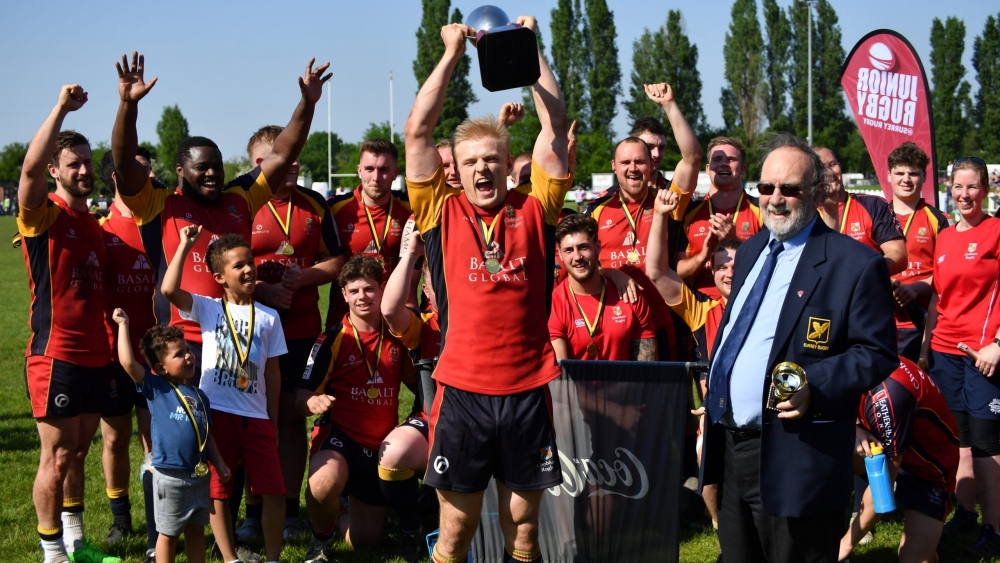 On a simply roasting afternoon at Esher RFC, Chobham took on Effingham and Leatherhead in the Surrey Trophy final.   Looking to win the title for the second consecutive year there was plenty of messages of not being complacent and the need for good performance despite the conditions.   Despite having to make a raft of changes to the match day squad which beat Camberley 9 days previously Chobham were confident of bringing the trophy home to Chobham. The Fowlers Wells men started the game as such and challenged their opposition from minute 1.   However, they made countless simple errors at vital times which not only stopped their own scoring but actually gave E&L the opportunity to take the lead completely against the run of play.   Converted well and Chobham found themselves 0-7 down due to their own inaccuracies. This sparked Chobham into life and they responded immediately when prop Sonny Kuwana crashed over from short range to cut the gap to 2 points.   Chobham at this point began to really stretch and challenge E&L, and were making real inroads in the midfield.   Next to score was fullback Laurance Elliot who first moved the ball and then worked hard to get it back on the inside before scrum half Robbie Kennard linked up well with Chris Browne after his superb break to score under the posts.   Both converted by fly half Josh Clark, the score at half time was 19-7 to Chobham. It was a well deserved scoreline but Effingham threw everything at Chobham in the second half and in all honesty, looked the better side for long periods.   However Chobham were able to add one more 5 pointer during the second half after a barnstorming run from left wing Charlie Andrews to stretch their lead to 24-7. E&L did manage to make it a lot more interesting during the closing minutes as their pressure told and they bagged two of the own, well deserved tries.   All in all Chobham will be happy of course to have retained their trophy however the performance was not what they would have hoped. The trophy win adds a positive end to what has been a tricky and at times frustrating season for all involved at Chobham.   The squad and the club must now look to use this as a spring board in pre-season and the next campaign. Man of the Match was once again kiwi Ben Whale who was superb at number 8 for the full 80 minutes.