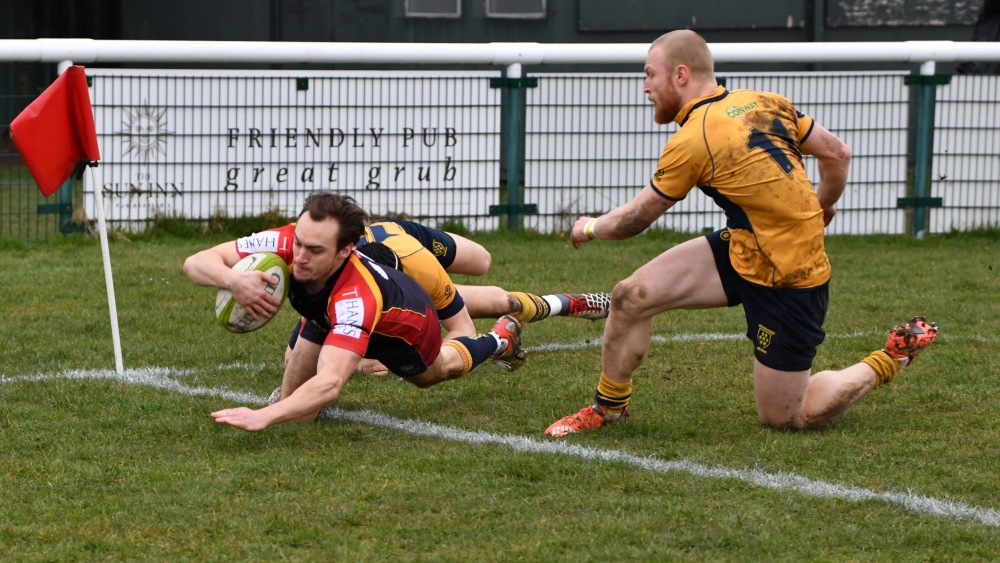 Once again Chobham finish on the wrong side of a nail biting finish and leave themselves right in the dog fight for survival.

On a grey but dry and mild afternoon, Chobham welcomed Sevenoaks to Fowlers Wells for their crucial fixture.   Having battled out a draw in Kent earlier in the season and with just 3 league points separating the teams it was sure to be a thriller. With the importance of the game so obvious to everyone it was disappointing that Chobham started so slowly,   Sevenoaks didn’t and within 20 minutes Chobham found themselves 10-0 down after the visitors had managed a penalty at goal and a converted try during their early dominance.   This did (thankfully) spur the hosts in to life and the Chobham response was to really increase their intensity and with it the pace of the game, from that point until the break it was all Chobham.   Slick interplay from forwards and backs, quick ruck ball and playing with real width allowed the Chobham side to assert themselves and the Sevenoaks defence soon faltered.   Working hard off his wing and ultimately earning himself the Man of the Match award, winger Liam Monaghan was able to finish two tries superbly, with one converted by full back Ollie Turner, Chobham had taken the lead.   12-10.   There was however time for Sevenoaks to knock over one more 3 pointer before the interval after a frustrating Chobham discretion.   12-13 at the break. Chobham started the second half in similar fashion and after a superb break from number 8 Ollie Smith, fly half Josh Clark touched down for 5 more points.   Chobham regained the lead at 17-13, and as Chobham looked to be in control of the game Sevenoaks managed to gain some more field position and scored their own unconverted try to regain the lead at 17-18.   The two sides then traded penalties as territory and possession ebbed and flowed.   First the visitors struck then Chobham chose to take 3 from the boot of Clark rather than go to the corner but unfortunately Sevenoaks had one more successful attempt at Chobham line to leave the score at 20 – 26 with just minutes to play.   Chobham threw absolutely everything at the Sevenoaks line for the remaining time but fell just short of nicking the game at the death and so the game finished.

Chobham had the opportunity to pull fully away from the relegation battle with a win but will now have to look pensively over their shoulders for the remaining weeks after the loss.   Tottonians away in a fortnight will be a huge challenge but if the Surrey men can turn them over then they will definitely be safe.