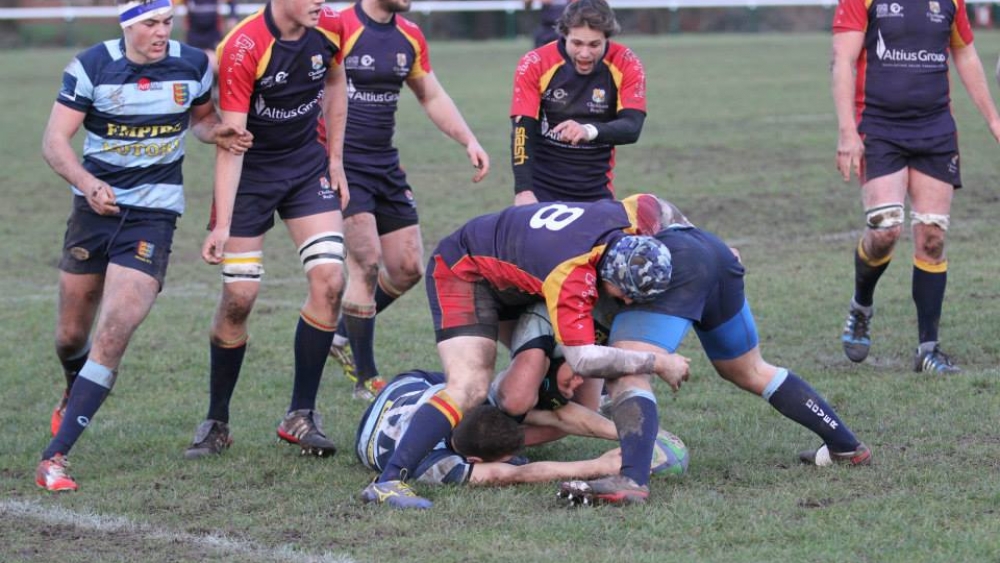 With the unbeaten run climbing to six and Chobham moving up to second spot in the league table, there would be some that would think a visit from Dover who are just outside the drop zone would be a walk in the park. In fact those inside the Chobham camp thought quite the opposite. Particularly on their own patch the men from Kent are a tough nut to crack and whilst Chob did secure the points in a tight match at a wet Crabble in October, Coaches Ryan Gregory and Tony Paul would have stressed the importance of matching Dover’s power before thinking about the result. The team sheet again saw a few changes in the backs. Ben Sims and Harry Guy were unavailable so Mike McDonald and Oli Guy both came into the starting line-up. Conditions under foot were on the soft side but bright, wintry sun gave the spectators a warm glow on a chilly afternoon.

Chob kicked off with a light breeze at their backs and almost immediately Dover showed their intent as they turned a tackle into a driving maul gaining 15 metres before referee Mr Goatcher saw a home indiscretion and awarded his first penalty of the afternoon which Jack Ayling put well wide. Chobham then looked to up the tempo but a lack of accuracy stalled any progress and the game meandered uneventfully in midfield. James Dunne had the chance to put points on the board on 13 minutes but pushed his kick wide but eventually the first score came on the half way mark. Ollie Smith was the creator with neat break before off-loading to the fast arriving Josh Devitt who scuttled over for a try. Dunne converted. Chobham 7 Dover 0. Dunne then increased the lead with a well struck penalty. Chobham 10 Dover 0. So at this point the plot was developing very much as expected but Dover remained resolute with a solid set piece and physicality at the break down. On 26 minutes they deservedly opened their account with a somewhat fortuitous try when a Dover misplaced pass struck their player’s knee but bounced perfectly forward for wing Sayers to dot down in the corner. At this point Chob huffed and puffed looking to put together a period of play but when an overlap was created but the pass inaccurate and the usually reliable lineout failed a couple of times, it was obvious that they weren’t firing on all cylinders. Dover perhaps sensed this hesitancy and on 32 minutes took the lead. Attacking down the right, a grubber kick was put through and with the ball bouncing favourably Hayden Annakie pounced to score the try which Sayers converted. Chobham 10 Dover 12. However this score seemed to stir Chob and immediately they created excellent field position and penned Dover into the corner. With penalties coming from both lineout and scrum pressure, the Chob opening came and following a huge surge from the home eight, scrum half Ian Barnes found enough space to dart over for the try. Dunne couldn’t add to it. Chobham 15 Dover 12. Half Time.

Gregory and Paul’s half time team talk had definitely been helped by the late score. The messages were simple – cut out the mistakes and up the intensity to match Dover’s physicality. On 48 minutes an excellent opening was created by Gregory but his pass failed to go hand. Then lock Dom Sammut broke through the middle and hacked the ball on only to be held back as he nosed ahead in the foot race. Easy decision for Mr Goatcher, penalty in front of the posts which Dunne knocked over the bar. Chobham 18 Dover 12. With Chob now starting to crank up the action Dunne extended the lead on 63 minutes with a very well struck kick from 40 metres. Chobham 21 Dover 12. Almost immediately Dover had a similar opportunity but the kick from Sayers lacked the legs. The force though was now with Chob. Sensing that this was the time to kick on and hunt for the bonus point they moved up a gear. A Dunne cross kick took play deep into the Dover red zone. Under enormous pressure, the Dover lineout failed and Sammut snaffled the ball and was driven over for his team’s third try. No conversion. Chobham 26 Dover 12. Against the run of play though it was the visitors who struck next. A series of powerful drives from the Dover engine room delivered an overlap which saw wing Ben Crawford crash over in the corner. No conversion. Chobham 26 Dover 17. Chob still pressed for the bonus point and on 75 minutes it came from an excellent individual score. Youngster Mike Mcdonald found space on the right and he fielded his delicate chip through and squirmed over the white wash to touch down. No extras. Chobham 31 Dover 17. Chobham now had their tails up and added a fifth and final try when Gregory reacted quickest at a penalty and his tap and go found his second row partner Sammut who strode over for the final try. Dunne bisected the uprights. Chobham 38 Dover 17. Full time. At the end this was convincing win for the Surrey men although the cussedness shown by Dover made them work hard for the victory. The difference was the home team’s superior fitness and cutting edge in attack which always looked likely to bring tries. With confidence and assuredness, Chob have put together a good run which now goes to seven and they have now opened up a small gap on the chasing clubs led by S&E. After a week off the action moves to Broadwater Park where a mouth-watering local derby against Guildford is on the calendar. With G’s having lost the last two games Chob will be looking to make it three.