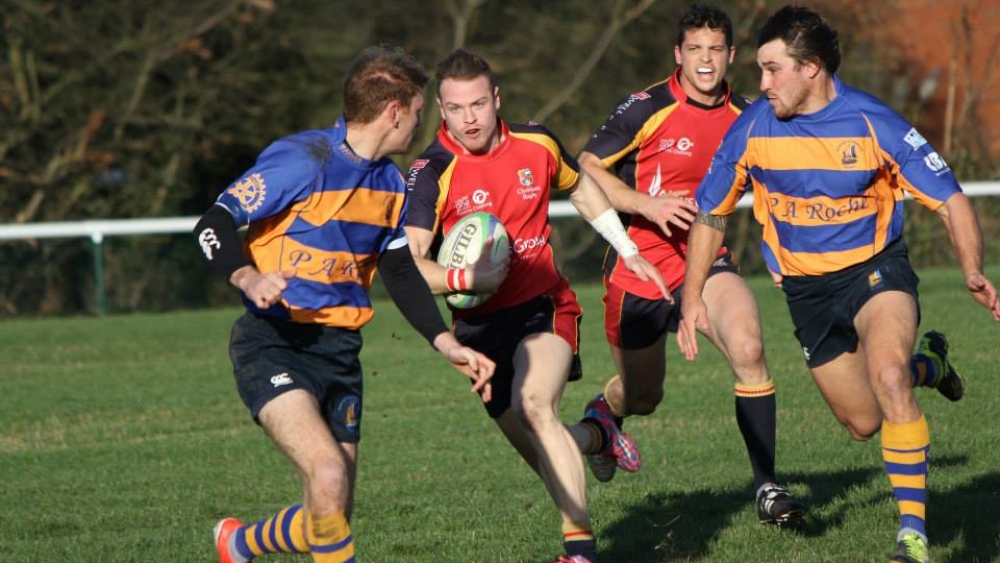 Chobham returned to action at Fowler’s Wells after two matches on the road and licking their wounds after a heavy defeat against fellow promotion hopefuls, Wimbledon. Nonetheless head coach Ryan Gregory reported a very positive week’s training and, for the first time in many weeks, having a full squad to select from. Changes saw Dave Askew return the back row with last year’s leading try scorer Ollie Smith coming in for only his second game of the season following his ankle injury against Sutton 6 weeks ago. G&F after promotion via the play offs picked up their third win of the season last week at home to Cobham but were seeming to struggle on their travels. Their last visit to Chobham was in February 2012 when they came away with a 17-3 win but a sign of Chob’s progression since then was that only 3 of that day’s squad featured today. With the pleasant November sunshine greeting the players and the playing surface perfect, Chob played into the blustery wind. Indeed the home side dominated the early encounters which set the pattern for the afternoon. Flyer Josh Devitt was hauled back for an earlier forward pass when looking threatening but the early pressure on the visitors told and James Dunne opened his account with a simple 3 pointer on 5 minutes. Chobham 3 G&F 0. With the home side dominant and having the majority of possession and territory, it was a surprise that the next score was sometime in coming but desperate G&F defending and some inaccurate execution by the home side kept the board unchanged. However on 22 minutes Gregory was bundled over for the try at the tail of an effective line out drive. Dunne was just wide. Chobham 8 G&F 0. With the visitor’s penalty count mounting rapidly in the face of a growing onslaught, referee Mr Warren inevitably reached for his card and fly half Kieron McRoberts took 10 minutes for the team. Immediately after centre Ben Sims burst over the try line only to lose the ball but from the resulting defensive scrum Gos were shunted backwards allowing Smith to mark his return with a try as he picked up the loose ball and darted over. Dunne added the extras. Chobham 15 G&F 0. Five minutes later on 35, Smith was again prominent with a trade mark burst over the gain line. With prop Sonny Kuwana arriving rapidly in support, he offloaded to the supporting Dom Sammut who touched down under the posts. Dunne converted. Chobham 22 G&F 0. The score line moved again on 38 minutes as Smith combined with fellow back rower Askew to provide the opening for Sims to crash over the whitewash and secure the bonus point. Dunne didn’t add to the tally. Chobham 27 G&F 0. Half Time. Coaches Gregory and his assistant Tony Paul would have been reasonable satisfied with the afternoon’s showing so far. With a dominant set piece delivering plenty of ball to scrum half Ian Barnes, it was important that the attacking shape was maintained to add to the try count.

The second half started perfectly for the home team. Straight from the kick off the livewire Devitt sprinted through a gap and with Dunne adding two the scoreboard moved on. Chobham 34 G&F 0. On 44 minutes hooker Tom Riley sensed an opening and strode through to add to the try count. No extras. Chobham 39 G&F 0. At this point Gos rallied. With scrum half Wes Dugan prompting tirelessly, they gained penalties and then yards but despite a foray into the Chob 22 came away with nothing as the home side comfortably cleared their lines with Euan Buchan and Adam Blemings prominent in the rear guard. After this breather the home side struck again on 56 minutes. A well-executed attacking play found full back Harry Guy arriving at speed on the outside shoulder and he raced over for the score. Chobham 44 G&F 0. The pressure continued as replacement Mike McDonald made a sharp break which was held up in goal. With another solid scrum giving the platform, Blemings moved the ball to wing man Liam Monaghan for his opening try of the afternoon. Guy having taken over the kicking duties added two more. Chobham 51 G&F 0. There was time for one final effort as the alert Devitt reacted quickest to a penalty award and tapped and dived over. No extras. Chobham 56 G&F 0. Full time. Although a depleted Gos offered little resistance, Chob clicked into gear during the first half and can be pleased with both 9 tries and a clean sheet. There is still plenty to work on to improve the accuracy of execution but the coaches and the squad go into the first break of the season in third place and in good heart, with the knowledge that there is more to come. Undoubtedly there will be plenty of twists and turns in what is turning into an intriguingly competitive league with 4 Surrey sides in the top 5 slots.