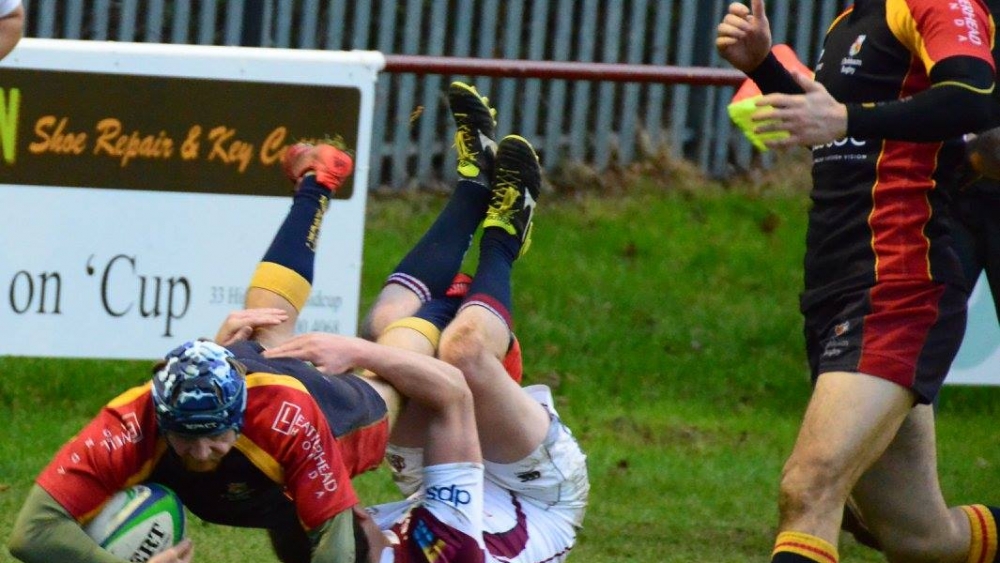 On the back of two consecutive wins, Chobham travelled down to Kent to take on 4th placed Sidcup knowing that a win would move them above their hosts and keep them well in with the leading pack. The Chobham team sheet showed a number of changes in the engine room with Kuwana, Sammut, Gregory and Askew all out of the equation. Last year Chob were the only side to do the double over Sidcup, but the challenge at Crescent Farm is always tough with the tight dimensions of the pitch suiting the home team’s style. Playing with a very strong wind at their backs, Chob started well with Tom King being bundled into touch just short of the line with only 2 minutes played. It was no surprise that the first score came soon afterwards as the alert Ian Barnes sent centre Jayde Cruickshank racing from his own half. With support runners arriving the ball found skipper Tony Paul who fed the fast arriving Dan Mays to muscle over for the try. Liam Monaghan’s conversion attempt was wide. Sidcup 0 Chobham 5. Chob looked to capitalise on this bright opening and with the backs looking confident ball in hand, it was hugely disappointing that a series of penalties and errors stooped the flow and enabled Sidcup to get into the contest using their superior scrum. Fortunately only one shot was in kicking range but Sidcup’s Josh Twyford was wide but the indiscipline and inaccuracy stopped Chob building momentum when the elements were firmly in their favour. With Monaghan’s long range kick not finding the target, the visitors looked to be taking only a slender lead into half time, but on the stroke of the clock good Chobham defence allowed full back Phil Williams to intercept an ambitious Sidcup pass and he raced away before shipping the ball to speedster Josh Devitt who hurtled under the sticks. Two points added. Half time; Sidcup 0 Chobham 12.

Having had the benefit of the elements, it was vital now that Chobham reduced the penalty count and controlled possession and territory to frustrate the home side. Unfortunately the coaches’ words went unheeded as the visitors conceded 4 penalties in the first 10 minutes of the second half, losing Mays to the bin in the process. Twyford was finding his range and knocked over 3 of the 4 to reduce the deficit. Sidcup 9 Chobham 12. Sidcup continued pressing as Chob struggled to hold onto possession and manage the territorial battle as Sidcup’s set piece stepped up a notch. With Chobham again depleted as Simon Greenhalgh took a 10 minute break, on 63 minutes following a period of pressure in “coffin corner”, back rower Peter Grayson powered over and Twyford smoothly added the extras. Sidcup 16 Chobham 12. The lead was extended shortly after as Sidcup’s Louie Keeley slid over, again Twyford converted. Sidcup 23 Chobham 12. With 23 unanswered points conceded in 30 minutes, Chob however responded positively. With replacement 10 Lawrence Elliott prompting well, Sidcup came under pressure and some neat handling put Devitt in again for a try which Elliott converted. With 2 minutes left, it was game on. Sidcup 23 Chobham 19.

However despite plenty of ball in the last couple of minutes, a grand stand finish was not to be and a relived Sidcup celebrated at the final whistle. Full time. Sidcup 23 Chobham 19.

This was painful loss for Chobham who had more than enough quality to potentially take the points. Priorities for the coaching team will be improved execution and game management and a need for vastly improved discipline – a high penalty count coupled with playing for 60 minutes with 14 men against sides in the promotion race is not a winning recipe.