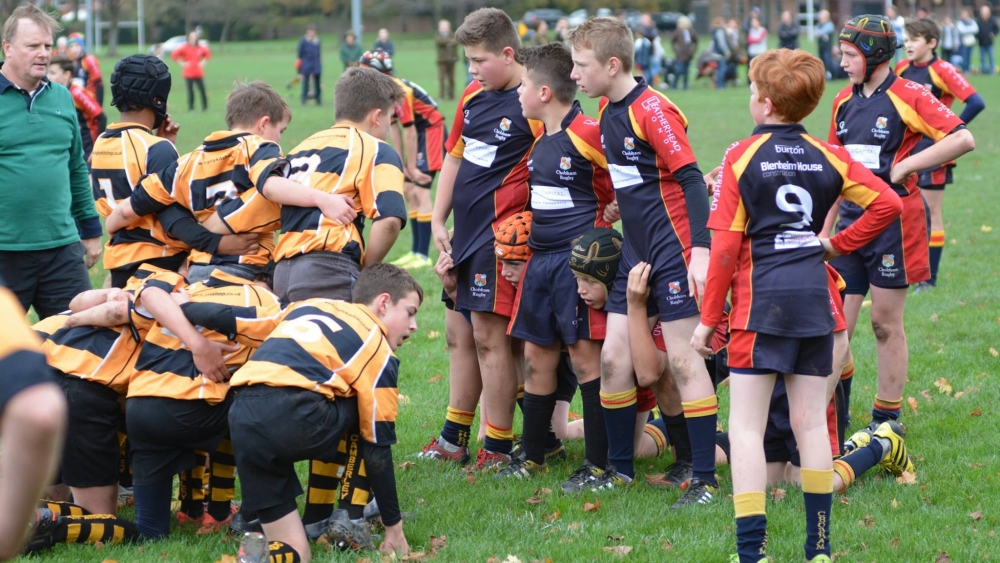 Match Report from Doug Mayger : Chobham Under 13s A kicked off their league season with a short trip to Watchetts Rec in Camberley. The home side played the first half with a strong breeze behind as Chobham took the kick off.

Camberley were immediately on the offensive with an attack to midfield, retaining possession at the breakdown they were almost through with Chobham defending their try line desperately, and ultimately winning a rare penalty at the breakdown. This proved to be a false omen for the remainder of the match as Chobham continually found themselves unable to compete at ruck time to the satisfaction of the referee. Camberley stole the line out resulting from the penalty and attacked again with good handling both left and right, with Chobham having to hold up the attacker on the try line once more, this time winning a scrum. From the clearance the Camberley pack won their own lineout and burrowed over from close in to open the scoring, missing the chance for an extra two points from wide out.

The restart was gathered by Camberley and an intelligent kick down field carried play deep into the Chobham half. Harry chased back to gather the ball but was scragged before he could clear. The Camberley forwards won the ball by having more bodies in the ruck and a couple of passes out wide to their burly centre was enough to double the score, with an easier conversion then making it 12-0.

The second restart was messy from Camberley and Chobham won a scrum just in their half. Solid work from the front eight gave the backs a good platform and after a lofted pass was gathered on the wing by Connor he had the strength and speed to break a couple of tackles and cut the deficit to only five points after George added the extras.

Theo gathered the kick off cleanly to set up a maul. A chip over the defence was spilled backwards by the Camberley fullback slowing down the Camberley defence, which gave Doug the time to get up and charge down the attempted clearance. A friendly bounce allowed him to gather on the edge of the 22 before Camberley were able to hack the ball back down field. The Chobham backs returned the ball back into the red zone where Camberley were pressured into another penalty. The initial charge was held up but the resulting scum was won and Chobham attacking down the blind side. The attack was held up but this time the rucking was good with Oli diving over from a couple of yards out to level the score a couple of minutes before half-time. Unfortunately Camberley were awarded a penalty in the Chobham half and took a quick penalty which allowed the centre to score his second try and make the score 19-12 to Camberley at the interval.

Into the second period, and Chobham now had the wind at their back. The early minutes were spent camped near their own line as the penalty count began to rise and there was little opportunity to make ground without a decent spell of possession. Defensively they were called on to force Camberley to spill the ball right on the line.

Constructive play was made more difficult by the ref’s decision to brandish the first yellow card seen against Chobham but good scrambling defence kept the try line intact.

Injuries to the home players further fractured the play in the second half and the penalty count kept climbing, including one at the scrum as the pack drove their opponents backwards, and the ref treated another Chobham player to a 5 minute rest on the side line. Camberley were now in full panic mode as Chobham went all out for a final score. A Chobham scrum earned a penalty taken quickly and Camberley were forced back ten yards as they slowed play from offside. Chobham drove forward again through the forwards but once again the decision at the ruck went against them and the chance was lost, the home players, coaches and crowd breathing a huge sigh of relief as the ball was kicked dead and full-time called.