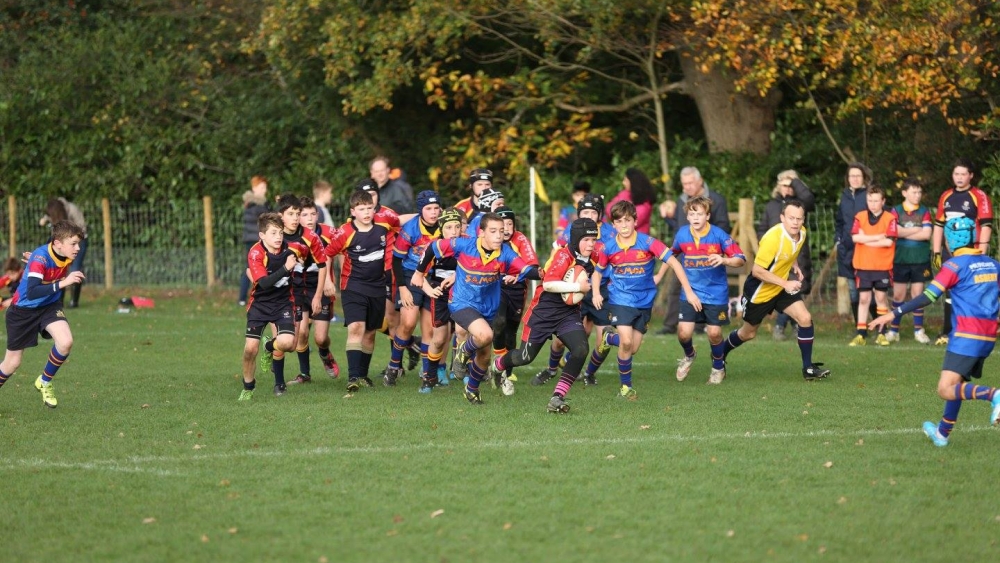 Match Report from Simon Hemsworth : The anticipation was high as the Bs took the short trip to Cobham for their first league match of the season.  This has always been a close fixture and this proved no different. With the wind in their faces, Cobham came out of the blocks quickly and were on the front foot for much of the first 10 minutes, but with solid and disciplined defence across the pitch, with Aran and Dan putting in crunching tackles in the backs, and Marcus targeting the fly-half, Chobham began to see more of the ball. Working hard around the fringes through the forwards, Chobham punched holes in the Cobham defence with Tom W and Callum to the fore, and started to put the home side under pressure. However, around 15 minutes in, as with the Guildford friendly the week before, the first try came from a turnover around half-way as the Cobham player got round on their right wing to score on the 15 metre line. Conversion missed. From the kick-off, Chobham were straight back on the front foot. An excellent passage of play through several phases involving backs and forwards ended with a great opportunity with an overlap on the left wing. Unfortunately, whilst a strong break was made despite boys outside, Cobham were able to turn the ball over within 10 metres of their line and the chance was gone. The half continued to ebb and flow but Cobham finished the strongest and only some excellent defence in the corner by Ethan, who had an excellent game in defence and attack, kept them out before the whistle blew for half time. HT: Cobham 5 – Chobham 0

The second half followed the pattern of the first – each team were able to put together sustained periods of pressure but without really putting the try line to the test. Chobham though weren’t quite able to get their backs running in open play as has been seen earlier in the season as the Cobham backs came up fast as a line and generally denied them space. Cobham’s second try was in the end a simple one – several phases of forward play drew Chobham’s defence in close and then the ball was spun through the hands the give the right wing an easy run in from 5 yards. Conversion missed. With 10 minutes still to play, there was plenty of time to get back into the game. Chobham went back to what had been a strength so far, keeping it tight with a series of pick and goes, especially through Andy and Tom W again. Remarkably, up until now there had yet to be a penalty given to either side, but following a chip through and excellent pressure on the Cobham backs, Chobham received the first of the game within 10 metres of the line. Slight indecision at the tap and go gave Cobham chance to reorganise their defensive line and they kept out the attack forcing a turnover. Chobham finished the stronger side but no more opportunities were created. Final whistle: Cobham 10 – Chobham 0

The main difference between the sides was the penetrating running of just a couple of the Cobham boys. The breakdown was well contested and the scrum was strong. The handling was generally good but some of the decisions at crucial times with ball in hand led to turnover ball which ultimately was our downfall. The final score was just about a fair reflection of the balance of play, but on another day the result could easily have been different. The whole squad played their full part in today’s match and should be proud of their efforts.