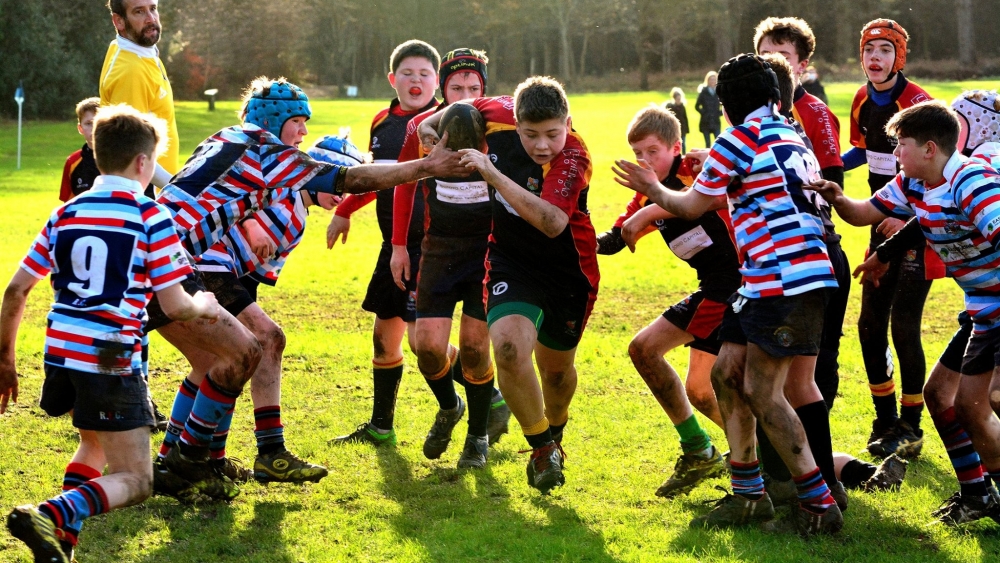 Match Report from Doug Mayger : Chobham Under 13As travelled to Whiteley Village to play Reeds on Sunday, and despite the heavy rain found a firm playing surface in complete contrast to the previous week in Bracknell. Taking the opening kick-off Chobham put pressure on the catcher but Reeds showed that Chobham would need to be at their best as they went through several phases to create the first attacking phase of the match. Chobham were eventually pulled up for a penalty close to their own line, but a series of strong tackles and scrambling defence kept the line intact and forced Reeds back towards the 5 yard line where they were awarded a scrum. With a big blindside to work with Reeds found their main weapon on the win who had the strength to get over in the corner despite the Chobham tacklers. This spurred Chobham on and for the remainder of the half play was almost completely in the Reeds half. Pressure began to mount and Reeds were forced to concede several penalties around the breakdown area but their defensive line was able to counter all that Chobham could throw at them. Oli had a charge from a penalty close in but the drive was ultimately forced into touch. The Chobham pack had the ascendancy at the set piece, in particular stealing a number of line out throws, but couldn’t convert the territory and possession into points down the slope. Adam had the best chance but his opposite number was just able to put him off balance and prevent him from streaking home in the wide open spaces on the wing. Late in the first half a Chobham kick to the corner ended with an attacking scrum 5 yards out. A back row pick and drive from Connor levelled the scores as he had the momentum to cross the whitewash under the covering tacklers.

Into the second period and it was Reeds turn with the slope which they used well keeping Chobham pinned back near their own line. One charged down clearance was fortunate to bounce over the try line for Chobham to ground and earn a 25 yard drop out. Solid defence was needed across the width of the pitch as Reeds probed for a second score. The dam was breeched in controversial circumstances as the Reeds 8 drove infield to set up a ruck. Chobham thought they had it covered but those at the breakdown felt that Reeds had come straight into the side of the ruck to recycle. A cross kick fell fortuitously for the winger again who was able to gather and score in the corner for a second time to take the score to 10-5 for the home side.

Chobham clawed their way back up field in search of a second equalising score. A missed touch kick by Reeds was missed and a madcap kick and chase carried Chobham well into Reeds territory, winning a scrum in the centre of the field. A solid platform allowed the backs to put the ball through a few pairs of hands and a nicely worked inside pass took play close to the line but a penalty at the ruck gave Reeds chance to clear their lines. A steal from the throw gave George space to get forward but Reeds scrambled as well as Chobham did and drove play back towards midfield. A missed kick for touch gave Reeds the chance to attack again and the tiring defence stretched and finally broke to give the hat trick try to the Reeds winger who had space enough to go round under the posts for a simple conversion and a 17-5 lead for the hosts.

Chobham went in search of a try to at least earn a losing bonus as Reeds were forced to give away penalties to protect the line. Chobham’s target man punched away but the final whistle blew with Chobham being dispossessed right on the line and the ref ruling a knock-on before Hugh pounced on a loose ball in the in goal area.