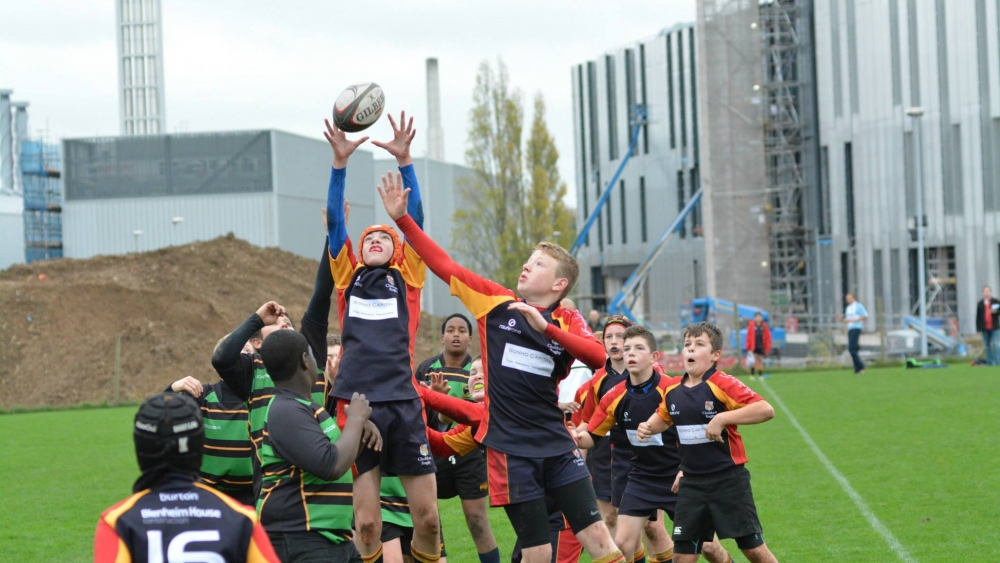 Match Report from Doug Mayger : Chobham Under 13s A travelled north of the Thames on Sunday for their final warm-up match before opening their league season. Grasshoppers were the hosts who play in the shadow of Rupert Murdoch’s TV empire, home to several of their round ball shows.

Chobham were to receive the first kick-off and had first use of the slight slope and wind advantage. Callum gathered the kick with a neat low catch but he was left isolated somewhat as the home pack were first to the breakdown and won a turnover. Chobham were able to pressure at the next tackle and won a scrum. Good possession from a scrum initially under pressure allowed the backs to make use of the space. In what would be a recurring theme throughout the match good quick handling laid the groundwork for a Chobham attack as the ball was carried into the Grasshoppers 22 before DanP was finally bundled into touch. Territorial possession was maintained as Grasshoppers were in trouble at the set piece. A backs attack through midfield was carried on by Oli before quick ruck ball was won and taken right where Chris was able to cut back against the scrambling defence to go over for the first try. George added the extras and it was 7-0. Grasshoppers earned a scrum from the restart and the scrum-half darted blind to win a penalty. From the tap Charlie was straight over the tackle to jackal the ball and win a penalty for Chobham to clear. From a midfield scrum, Max kicked deep and the ‘Hoppers 15 was under pressure but a home penalty was awarded at the tackle. The relieving kick fell short and good rucking again presented quick ball to the backs and it was Connor’s turn to cross for the second try, again George slotting the conversion.

It was 21-0 almost immediately as the restart was initially fumbled backwards but was hacked downfield. DanM was on hand to make the tackle, MattN pinched the ball and darted for the line before a neat inside pop to Chris was enough to beat the defence and the score was under the posts. Gathering the kick-off Gideon did his best Phil Bennett impression sidestepping about half the home team but the rest of the team couldn’t keep up with him and the play petered out. A fourth try came from a sweeping handling move from well inside the Chobham half. Harry gathered a penalty ‘up and under’ and the ball passed through the hands of Max, TommyW, MattN, Max again, Dougie and finally Connor to keep pace with Chris with a second try. George finished off a flawless first half from the tee to make it 28-0.

There was time for more action just before the half as another passing move appeared to result in another try. After checking with the video ref it seemed that George was tackled in the act of scoring and the Grasshoppers defence had stopped one. The resulting drop out seemed a mystery to both sides before a Chobham drive for the line was thwarted and the ref blew up for half-time. Playing with the elements, Grasshoppers opened the second half in much stronger fashion, closing on the Chobham line bursting through a series of soft tackles. Finally the ball was held up and a clearing kick relieved the early pressure. Grasshoppers were able to maintain the pressure on Chobham who had to show their skills in defence as much as they had in attack in the first period. Good scrambling and pressure on the ball kept the line intact and strong work at the scrum, with Fin, Callum, Ethan and Charlie showing their versatility playing in a number of positions, taking a few against the head. One scrum was pinged for driving too far but the quick penalty was met by a solid tackle from Al to force an immediate knock-on.

Chobham absorbed everything that Grasshoppers could muster with the tackle count going up and Teo as his scavenging self a real nuisance around the ruck.

As Grasshoppers started to run out of puff in the final few minutes, Chobham were able to get on the front foot again with Chris and Connor both completing hat-tricks in similar fashion squeezing through small gaps in the tiring defence to add to the points tally under the posts. Harry was able to make both conversions, one making use of a post before dropping over. Chobham finished the game in grand style with another well-crafted backs try from the kick-off, Dan P outstripping the defence after well-timed passes into space, to make sure Connor and Chris didn’t monopolise the scoring. Teo had the chance to finish off the scoring but showed he was more Messi than Hugo Porta with a kick well below the crossbar.

The final score was 47-0 and a great of example of how quick breakdown ball and passing that would bring a tear to Dan Orpin’s eye will be key to keeping the scoreboard ticking over. Compliments came from the Grasshoppers referee on the quality of play on show, so fingers crossed this can be taken into the opening league game at Camberley this Sunday.