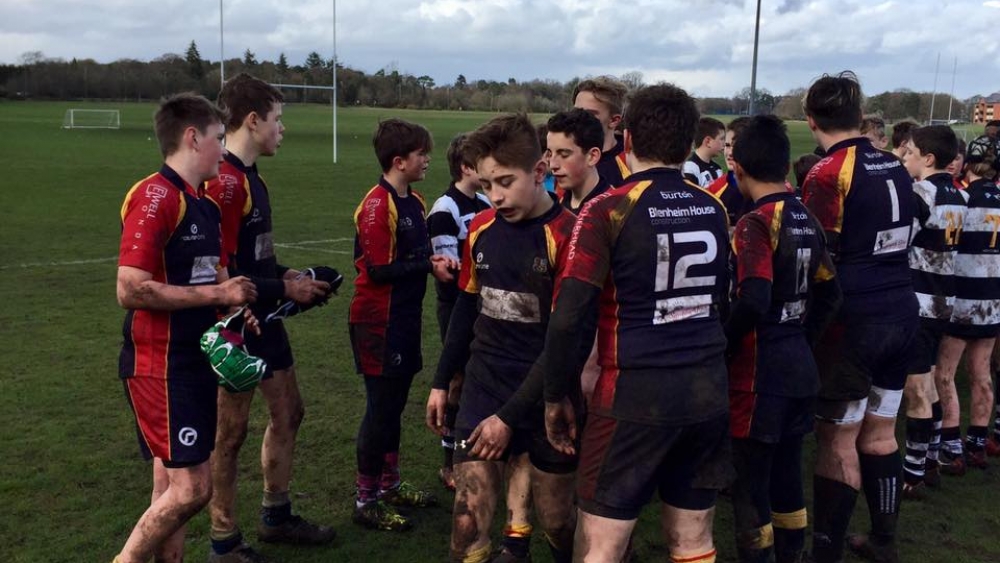 On a showery day and a muddy pitch, Chobham kicked off. A good chase put pressure on the Farnham player who immediately knocked the ball on. As a result of the scrum, Chobham were able to use strength in the forwards before passing it through the backs. Sammo at 9 commanded the forwards and soon, Harvey scored the first try (missed conversion). Chobham continued the early pressure, playing well through the phases with the likes of Finn and Ben. Some great hands in the backs from Aran and Euan led to the second try in 5 minutes: Andy scoring in the corner. Tommy still wasn’t finding his kicking boots and it remained 10-0. However, he was running strongly in the backs, and with the help of some brilliant runs from Harrison and Akin, Chobham won a five-metre scrum, from which the famous “Mitsy” tactic led to Harvey scoring his 2nd try. Farnham were desperate to put something on the score sheet but were held up at consecutive mauls by the forwards. Lewis darted round the outside before offloading to Euan who made a break to the halfway line. Matt W then ran from halfway to score on his return from injury. HT score: Farnham 0-20 Chobham.

After halftime, our strongest bench yet (Max, Jacob, Rhys and Ethan) came on and made a strong impact; our pack led by Joe and Billy, drove Farnham into their own 22 and Joe came charging in from ten metres out – no one was going to stop our skipper scoring the fifth try of the match. Yet another break from Euan gave Chobham another try, this time Teo dived under the posts. But as we began to tire, our discipline started to fade and our penalty count grew. Max had a telling off from the ref when he tip-tackled a Farnham player. However, Euan, having had a great performance at 10 all match, earnt another well-deserved try under the posts. Tommy made it 7 from 7 missed kicks in windy conditions. After two more tries from Harrison and Matt, two more kickers tried their luck, but Euan and Andy both missed their chances. However, Andy redeemed himself by scoring our final try of the match and his second. The final whistle blew and Chobham advanced into the next round of the cup.