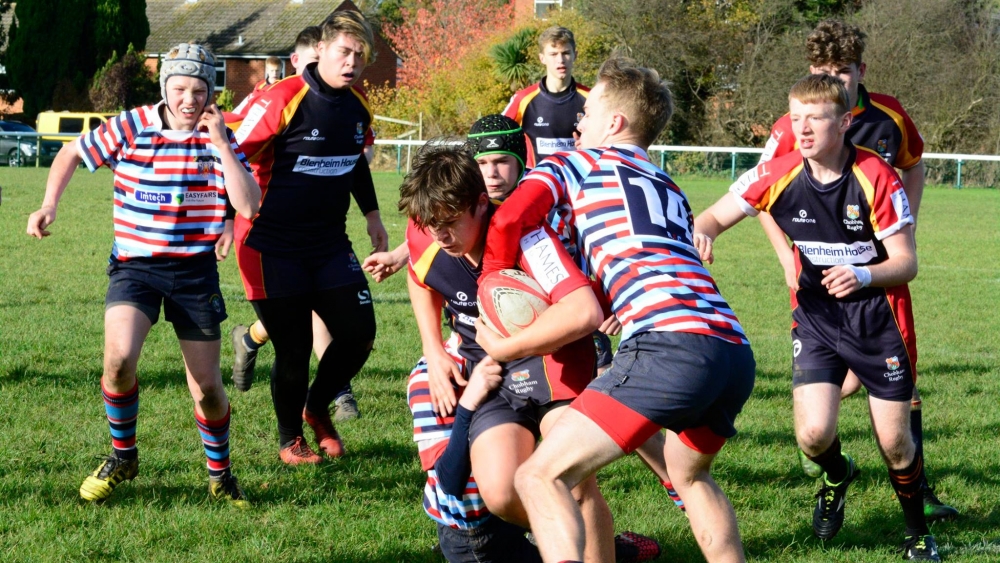 Chobham U15 As entertained Reeds in their first home match of the season. This has always been a tight fixture with a win a piece in the past couple of seasons.

Facing a side with a definite height advantage Chobham safely set the initial kick off and chipped back into Reeds territory. Their 15 was wrapped up but was able to hang on and his team mates went on the attack with a hit up close to the breakdown. This sucked in the Chob defence around halfway and the visitor’s right wing had room to go for the line, with good footwork ensuring there was just enough room to open the scoring in the extreme corner.

Chobham regrouped quickly and held Reeds in their own territory as both sides jockeyed for an advantage. Chob won a penalty and had a line out in the Reeds 25. A neat loop looked to tie-in the defence but a wide pass was well read by the Reeds winger who snaffled it and had a free run as the Chobham backs had been all in attack. It was a definite case of déjà vu with the opening two scores being the same as last time out against Sutton.

Chob were up against a much stronger side however and were staring down the barrel as they tried to get a foothold in the game. To their credit the boys stayed focussed and immediately won the restart pushing Reeds back towards their line. With a couple of minutes pressure a mistake came from the Reeds scrum half with a loose pass on his own line. Gideon was alert to it and was able to dive over from very close in, giving Chris a simple conversion in front of the posts and a 7-12 score line.

The remainder of the half was a slightly scrappy affair with aggressive defence from both sides having the edge over attack. Chobham showed they had plenty of ‘dog’ about them as Reeds tried to release their big runners but were cut down each time before they could break any tackles. Matt and Al in particular were upping their tackle count to keep Reeds back around the fringes. Half-time came and Andre and Lawrence, with Matt doing his best to keep up with the whistle, had plenty to work on with the fight back from the early scores. A cold wind was coming from the North for once and into the home team’s faces after the break so it would take a real team effort to keep up the momentum.

From the kick it was clear that there would be a real scrap for the game as Adam won the leap for the ball and put Chobham on the front foot immediately with Reeds conceding a 5 yard scrum. Reeds themselves clearly had ideas of their own as they defended strongly and forced Chob back to halfway and then won a penalty that was kicked to the Chob 5. A drive was held up making Reeds go wide and Tommy poached the ball to set off on a charge up field. A cheeky chip over the fullback around halfway got a home bounce and Chob were right back close to the visitors line for a scrum. As before defence had the upper hand as scrambling defence forced Chob back to midfield. Both sides tried to work an opening but with hardly a tackle being missed neither side could make a break count.

As the game reached the final quarter Chob had field advantage with a scrum on the left hand side. The forwards set a great platform, as they had all day at scrum time, giving the halfbacks time and space to set the ball moving. A hit up in the middle was followed by quick ball at the ruck. A delayed pass from Chris in midfield gave Adam the space he needed to race in behind the defensive line and level the scores at 12-12. A score against a number of school mates to be revisited on Monday. Sadly thee conversion slipped just wide in the strong wind but this set up the final few minutes where a single mistake or moment of inspiration would settle the match. Both sides were still going hammer and tongs in search of that break. Reeds had a lineout and then scrum right on the Chobham line but first up tackling from Doug forced an error and the Chob scrum allowed the clearing kick to be made. Then Chob had a penalty in midfield but in their eagerness to go quickly a pass was spilled.

The Reeds scrum-half then had a dart from a ruck but Matt swooped after a tackle and won a penalty for hanging on at the tackle.

Reeds made one final attempt to get one of their speedster wingers away but the midfield defence meant he was right out on the touchline and Doug was able to shepherd him into touch. A kick downfield and into touch from the resulting line out was the final action with the game ending in a 12-12 draw. Credit both sides in attack and defence keeping the crowd warm(ish) with 100% commitment on both sides.