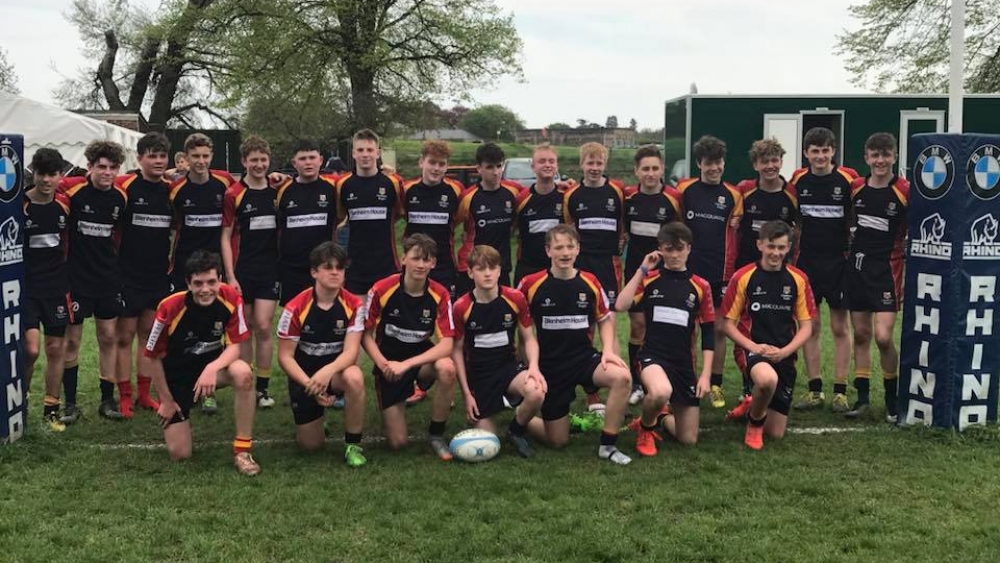 The Under 15 Bs and As made the short trip to Vandals on Sunday or their respective cup matches. The B squad faced Guildford A in the Chairman’s Cup, whilst the As were in the President’s Cup final against Dorking.

The Bs were first in action, taking the kick-off cleanly and Guildford were caught offside for the first of several times during the opening few minutes. Chobham opted to play close to the breakdown early on, looking to make ground into the Guildford half before using the wider channels. The Guildford defence was up to the task and were able to limit the possession gained and ultimately turned the ball over and kicked to midfield. Chobham then conceded their first penalty and Guildford were quickly close the blue line with an attacking lineout.

A sack at the line prevented any drive being started but Guildford retained possession and used the three-quarters for the first time. They looked to have made it count but the Guildford wing managed to spill the ball as he tried to dot down. Sadly the ref went back to an earlier infringement and this time the Guildford attack was able to open the scoring out wide and lead 5-0. Chobham were quickly on the offensive at the restart with their best spell of the match through the remainder of the half. A strong chase led to a knock-on on the Guildford 25. A blind side move gave Lewis room to  run hard at his opposite wing and with strong support play was taken up to the 5 yard line. A tap penalty got to within a yard of the line and Rhys was able to squirm over for the equalising score. Samuel was sure footed with the conversion and Chob were leading 7-5.

Chob were able to maintain their momentum and a superb 15 yard drive from a lineout took them close once more. The backs were working well together with Andy coming off the blind side wing and MattW jinking forward to keep Guildford on the back foot. MattW unfortunately succumbed to a nasty ankle injury at this stage but Chob were able to keep on the offensive but without managing to add to their slender lead at half-time. In the second period Chob kicked deep and tried to keep the pressure on. A spilled pass gave Guildford a scrum and their centre was able to slip through a gap in the defence to break free. His powerful run was too quick for the defenders and he was able to scramble home under the posts and leave a simple conversion to regain a 5 point advantage.

This breakaway score worked wonders for Guildford as they raised their game and were able to repel Chob’s attacking options and work their way back into Chob territory. More hard running from a quick penalty and some tiring tackling gave them another score and a 12 point lead at 19-7. With Chob now chasing the game they began to stray offside in their eagerness to claw back some points and a series of penalties saw Guildford back in the Chob’ 25. Guildford’s fly half darted for the line but he was kept out manfully and turned over. The clearing kick was just too low however and Guildford were able to parry it and re-gather. Their backline moved left but were given no time on the ball and a loose pass bounced free. As is often the way though it bounced back and to a Guildford player who took full advantage to  power over in the left corner to extend the lead to  24-7.

With a few minutes remaining Chob chased the restart again and Lewis flattened the full-back giving a target for the forwards who won a penalty at the ruck. Andy came in off the blind side wing again and then the ball was moved out too Saxon in the outside centre channel. As he was tackled he executed a superb back handed flip pass to Lewis on the wing who scooped it off his toes and was able to cross the whitewash as he was tackled to get one back. Rhys slotted the conversion and it was now just a 10 point lead.

Chob went after a final consolation score as time ran down, keeping the ball alive as Alfie, Billy, Akin and Harvey drove through the midfield and back into the Guildford half. The Guildford defence managed to take the attack over the touchline eventually and the ref blew for full-time.

So ended another strong showing from a squad who competed well against another A squad, underlining the depth of ability throughout the age group.

The Bs have one final match at home against Farnham B to see if they can end the season in style. 
For the As it was time for the President’s Cup final, the premier Surrey junior competition. Few on either side will have forgotten the dramatic end the last time these sides met with Chob winning narrowly 15-12 on the last play of the match. No doubt Dorking would be desperate to avenge that reverse.

Chobham started quickly and earned an attacking scrum from a good high kick. Dorking were then pinged and Chob kicked into the Hoops 25. An early release off the top gave the backs a first chance to attack but it came to nought as Chob lost the ball in contact. Within a couple of minutes Dorking were well into Chob territory as a series of penalties allowed them to kick upfield. Having a much bigger pack, the Dorking strategy was clearly based around the ‘forward rumble’ as they opted for the drive from the lineouts. They pounded away with the big lads looking to crash through but the first up tackling from Doug and Harry was superb and they finally resorted to spinning it wide where the backs didn’t carry anything like the threat of the pack and they coughed up possession from a loose pass for Chob to clear their lines as Adam was first to react and snuff out the attack.

Penalties continued to come as Chob pushed the offside line too hard and Dorking were able to set up another lineout 10 yards out. Initially they tried to draw another penalty, holding the catcher airborne before offloading to the scrum half. Tommy broke from the back of the line to bring down the fly-half behind the gain line and win a pressure relieving penalty for holding on. With the first half almost 15 minutes old the ref awarded the first scrum of the game to Dorking. Chob’s tight five were sharper than Dorking and Charlie pinched one against the head. With the Dorking backs having to react to the lost ball Chob made the most and Chris was into space. Connor was on hand to take the ball at pace and got to within a yard or two of the line before being hauled down. Chob then thought they had got the first score but the ref decided he couldn’t see and awarded a 5 yard scrum.

A loose pass was then picked up by Dorking and Jack had to make a last ditch tackle on halfway before Dorking hacked further upfield towards the Chob try line. The boys were able to get back into some kind of defensive alignment and MattN put in a superb tackle and then get back on his feet to win another relieving penalty. From a squint Dorking throw Chob had a scrum in good field position and for the first time in the game slick handling out to Aran on the wing threatened the Hoops line. After an interchange between forwards and backs Tommy broke through and opened the scoring in the left hand corner, a little too wide for the conversion attempt.

The Dorking restart didn’t go 10 yards but Charlie saw a gap and burst through the advancing forwards into the Dorking half. The full-back made the tackle but Chob were still in the ascendancy.

The rush defence was working well and Reece scooped up a dropped pass to set up a quick ruck, but the chip through was just too long. The whistle was beckoning as Dorking squeezed out to halfway before kicking away possession. Chob returned the kick for the Dorking player to get ball and a crunching tackle from Fin in unison. The ensuing penalty was kicked downfield and this time the Chob forwards got the drive going with props Oli and Dan combining to good effect to make sure Dorking ended the half with a blank score line.

Dorking started the second period sticking to Plan A as they were able to get a good drive from a lineout and put Chobham into trouble. Going through the phases tight in the defence buckled and finally broke as Dorking levelled with a short drive into the corner. Chob were back near their line immediately as they were offside from the kick and Dorking went for the drive again. They managed to spill the ball and were then penalised for an early shove, trying to counter the rock steady Chob scrum. Gideon was alert to the space and made a break into Dorking territory, looking for his backline outside him Dorking were judged to have deliberately knocked on and Chob had a penalty in promising position. Another quick tap with Chob carrying well got to the 5 yard line through Callum and Charlie was able to dart through a gap to score Chobham’s second try again out wide to restore the 5 point gap.

The game became a bit of an arm wrestle with Dorking keeping the ball tight and their backs grateful it was a warm day as they waited to have a run with the ball. In truth the tactic worked well to a point as Chob conceded a number of penalties but when it really counted Dorking couldn’t get the ball over the line and Chob held them out on the line a number of times.

The referee had warned Chobham about the penalty count and finally waved the yellow card and Chob were down to 14. Sensing this was their chance Dorking tried to crank up the pressure up front but a tremendous defensive shift, with Al stepping in at hooker, kept them out and managed to turn over possession to clear upfield. Dorking’s driving maul had centred on an early peel from the front man but eventually the ref decided that they weren’t engaging legally and started calling them for it. Into injury time and restored to a full fifteen Chob had been able to eke out some territory and were looking to settle the tie. Another lineout free kick and Oli was charging at the heart of the Dorking defence. With his forward mates at his heels the ball was in the backs hands but white line fever struck and Dorking had the ball back once more.

Added time seemed to last forever as Dorking had one final spell of pressure near the Chobham line. Once again they tried to bully their way over, choosing to attack down the narrow blindside where a try might realistically only earn them a draw. Despite the close attentions of their own band of supporters in the corner Dorking couldn’t find the way through on the last play, and it was left to MattN to grab a dropped pass and hoof the ball gleefully off the park and seal a memorable victory.

The trophy will be presented at an awards night in a few weeks, but such is the way of junior rugby that these two sides will face each other for the third time in cup competition as they meet in a Harlequins Cup finals day game at Farnham. Victory for Chobham would make it 8 wins from 8 in competitive fixtures this season.