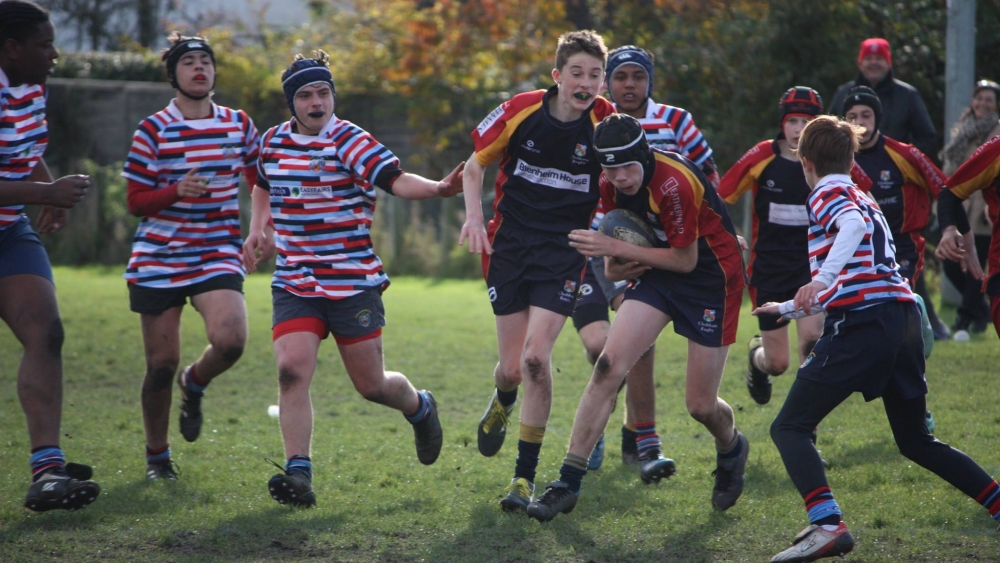 After a storming performance at Old Ruts, Chobham were at home against a Reeds side that we’d been playing against since Minis. We put out a similar side to last week, with Tom coming in at 9 and Sammo shifting out to 12, Sam at full back, and Joe starting at prop. From the start, Reeds looked the stronger side and within a few minutes, they were 5-0 ahead. As well as this, hat-trick scoring Andy had to go off because of injury. We weren’t going to let this defeat us however. For the rest of the half, Reeds hardly got near our 22 as a result of some fantastic defending. At this point in the season, Harrison had settled into the captaincy and was leading from the front. Harvey and Max at second row, as always were stuck into the rucks, and the back row of Teo, Hugh and Saxon will surely be a stronghold for the future. Lewis was putting himself in front of everyone, not missing at tackle all game. Despite this, at half time, Reeds held out and it remained 5-0. Chobham were straight out the blocks, and quickly gained multiple lineouts, with Ben throwing in, and scrums. A scrum on the five-metre line was distributed by Danny to Matt who spotted a gap and scored. It was game on: 5-5. This was clearly a huge morale booster, and soon we had another five-metre scrum where we executed the ‘Mitsy’ ball giving Saxon his second try in two games. We now knew defence would be our main attribute to get right, and frankly, it was immense. In the second half, Reeds didn’t get it out to their wings at all. Aran, who had come from the As, had the ball, and offloaded to the skipper who found space and made a good twenty yards. The ball went to Danny who put in a great cross field kick, retained by Aran and Sam. Then it was the forwards’ turn and Billy, who had had an exceptional game, bundled it over to make it 15-5 with ten minutes left. For the rest of the game, Reeds were pushing for a try, and again, our defence held them out until the last play when finally, their big player managed to break through. The try was converted and the final whistle blew. We learnt lessons that we had to try to stick to our game plan at all times and that even someone can be tackled by another person who is half their height.