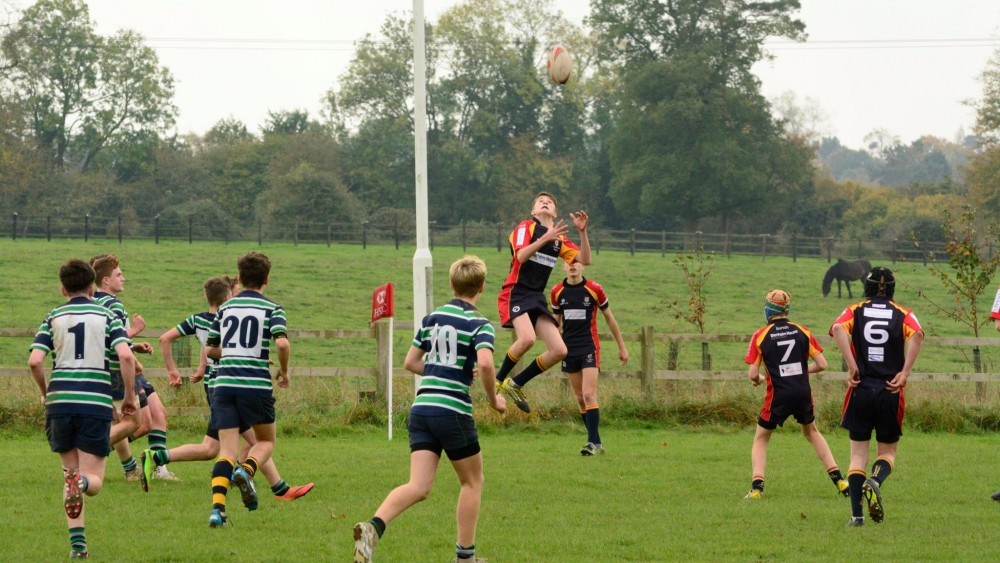 The Chobham U15 squad made the long trip to Abbey RFC on Sunday, to the north of Reading. The history books showed a couple of festival meetings going back to Under 8s and 9s with the honours split by the odd try on each occasion. With Chobham taking a squad of 31 players, including JoeB and Saxon on debut, the format for the day would be 4 periods of 20 minutes with a rough A squad B squad alternating.

Abbey showed from the first kick-off that their game plan would consistent of aggressive rucking and looking to pin the visitors in their own territory with the wind advantage. After a couple of minutes Chobham, on their 25, opted for an off the top ball to the scrum-half. Abbey’s man at the back of the line was up very quick and forced a spill at 10 and gathered the ball. With Chob having to react to losing possession a couple of phases further across the park stretched the defence too far and the opening score came for Abbey, with the conversion well in kickable range making the lead 7-0. Just reward for the greater intent in the opening exchanges. Chobham responded well and carved a half chance but a vital turnover won in defence allowed Abbey to clear their lines. Neither side was able to create much in the way of clear breaks, and the tight nature of the game was reflected in Abbey opting to go for a penalty kick at goal only just inside the Chobham half. The kick struck the left post and bounced dangerously down, but DanM was able to gather and give Gideon the clearing kick which was dropped and Chob had a scrum.

Late in the first period Chobham finally got some decent attacking opportunities as first Chris made a break and then Reece was on the hoof down the centre of the pitch, but the quarter ended early as Charlie took a whack on the nose with claret being liberally spread over the field. Into period two and Abbey were again out of the blocks quickly and Chob were on the back foot defending their line. It took an awesome double tackle from Harrison and Billy to win a turnover and clear their lines.

Abbey held firm in Chob territory and with the possible benefit of a missed knock-on managed to squeeze a try out very wide and a 5-0 lead. Undeterred Chob took the play to their hosts and Saxon and Aran forced a turnover immediately to put Harvey on the attack. It was more of the same now inn this period as both sides tried but failed to gain any real momentum. There was good scavenging from the boys in blue as they won turnovers, Ewen in particular scrapping well to win ball. Max and Saxon had the opportunity to go for a gallop but the final few minutes of the period petered out into a midfield stalemate. Period three now and Chob were again playing into the wind. It felt that the boys had used the 20 minute break wisely and had a much more positive intent right from the kick-off. The first foray was from some very neat interplay between forwards and backs keeping the ball alive in contact. Only an unfortunate knock-on brought thee attack to a halt.

Abbey then got the rub of the green from a spilled ball and used the wind to kick deep into Chob territory. Chob resisted manfully to force a turnover on their line which was kicked clear. Doug gave chase and auditioned for the second row by leaping for a high bouncing ball to keep possession and Abbey had to concede a penalty to slow the momentum. This was very much the theme for the remainder of the period, with Abbey on the back foot and the penalty count rising as Chobham looked for the opening to level the try count. The tackles were getting higher and higher as the backs looked for a gap on the right but when the ball went out and another late tackle put a Chobham player on the deck the ref opted to blow up 3 minutes early.

So we had reached the final period. Abbey were able to score early from broken play after a Chob kick went deep but gave them time to return and beat the defence wide out. A second score quickly followed just from the abbey wing having too much gas round the outside. A superb covering tackle from Finn delayed the score, but the wing wasn’t held and was able to get up and scrape over to make the lead 10-0. The remainder of the period saw the best of the Chobham side. Abbey were again conceding numerous penalties to keep the visitors out. From a turnover Ewen made a break left and Saxon again showed his promise beating a couple of tackles. Then it was Billy’s turn to keep Abbey on the back foot with a break from the ruck. Ultimately Abbey conceded a 5 yard scrum with a wide blindside. This was all that Harrison needed from number 8 having the pace to beat the covering back row and score Chobham’s first try of the day and it was game on at 5-10.

With time running out Chob were back in Abbey territory with another penalty on thee 25. TommyW was first to push for the line, before Oli was held up over the line. Abbey were subjected to a series of 5 yard scrums but managed to stop Chobham from making the score levelling breakthrough as time ran out with Chob camped on the home line.