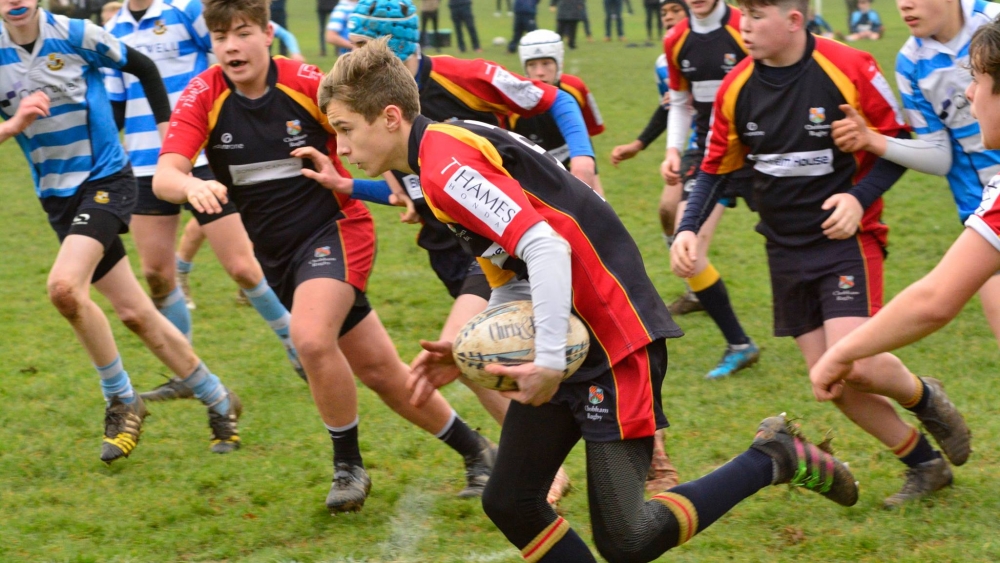 1st November 2009, anyone who was there will remember that game. These then Under 7s travelled as part of a mini event to Warlingham, to be met with horizontal freezing rain and a gale blowing across the tops of the hills. There were tears and tantrums before an early halt was called; some of the boys were a bit upset too…

Fast forward more than 8 years to the first return visit to Limpsfield Road and an opening fixture in this year’s Harlequins Cup.

Chobham started with a high kick to the left and the chase was almost over eager as a Warlingham back gathered the ball with the immediate defence over-running him. He set off down the right touchline with clear space in front of him for surely a dramatic opening to the game. Chris had other ideas however and his angled sprint across field meant he was able to make the last ditch tackle a couple of yards short of the try line, and forced a knock on into the bargain giving Chob the opportunity to clear their lines.

From the first solid scrum, that had the upper hand all day, the clearing kick just missed touch and the ref called a high tackle. Warl’ kicked for touch and had an attacking lineout. A well worked routine allowed them to get a good catch and drive going, but typical Chob defence held them up short and earned another scrum and earn a little breathing space finally. Warl continued to have the lion’s share of territory and a number of penalties put them back near the Chob line. The defence around the fringes was a match for the bigger Warl forwards as they were held on the line again and again. Ultimately the defence was drawn in tight enough to allow a couple of long passes to the winger enough space to cross over and it was first blood to the home side. The conversion from wide out was missed and Chob had a 5-0 deficit to make up.

This proved to be the wake up required as Chob upped the ante and spent the next 10 minutes camped in Warlingham territory as they looked for the tying score. The phase play and ball retention took the visitors to within inches on a couple of occasions and Harry and Charlie were deemed to be held up with the ref unsighted and a crosskick for Adam was agonisingly close. The 25 yard drop out was charged down and dropped giving Chob a scrum in good position. Hands left got to within 10 and earned a penalty. The initial drive was then held but the ball was moved left to George who darted through a gap in the defensive line to level. Chris following up with a good conversion and Chob had their noses in front.

Warl had a short spell of pressure following the restart but most of the rest of the period was in Warl territory with strong running and support pushing the blue and whites back. The number of penalties and finally the ref had to yellow card a Warlingham player at another breakdown close to their line. Oli carried from the pen but instead of battering away slipped a cheeky offload to Dan. The defence was caught on the short side and a fast ruck and simple hands meant Fin could stroll in right on the break to give Chob a 12-5 lead. The second half was a bit of an arm wrestle as both sides tried to get the upper hand. A number of missed touch kicks from Warl’ meant they couldn’t push home any advantage from the odd penalty Chob conceded. Chob were equally unable to make a decisive break from the scrum platform.

Chobham were able to make ground without the ball as their defence suffocated any attempts for the home side to break. A turnover around the home 25 allowed Tommy to gallop towards the line, the tackle conceding a penalty, with another crosskick from the advantage giving Adam another chance but his opposite number got the touchdown a fraction of a second. Back to the penalty and with time starting to run out the visitors opted for the kick which slipped just wide of the posts so there was still only one score in the tie. A long kick gave space and time for the three-quarters to run back at pace into the home half, and another breakdown penalty put a kick into the corner. A couple of drives went close and Chob had an attacking 5 yard scrum. From the back Chris made a jinking run back to within a couple of yards, and a quick ruck and bullet pass from Gideon put Tommy in from a couple of yards practically unopposed. With time ticking into injury time Chob had a 17-5 lead, but if Warl weren’t going to win they were certainly after another score.

A turnover from the restart gave them the chance to go to the right corner but ferocious defence kept them out. They moved the ball back left and were kept out in front of the posts, at the expense of a penalty. This time they had a go across to the left where again the blue wall was impenetrable. Finally they switched play right back across to the right where they were refused entry again and Chob had possession of the ball from a scrum. Ultimately the ball was kicked out on last play and an all-round performance from the full squad had been enough to make a winning start to 2018.