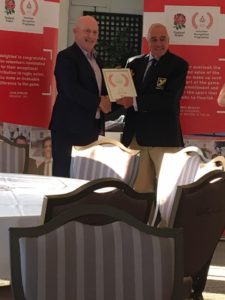 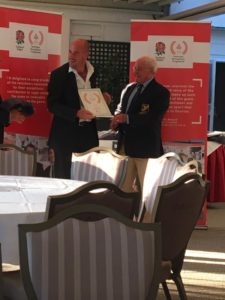 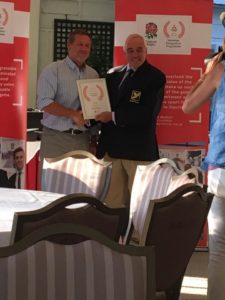 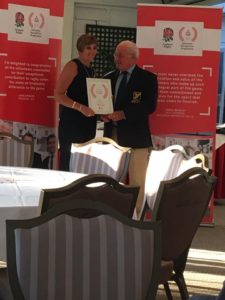 Congratulations to Chobham Rugby’s Ollie Wickes who was the “Young Volunteer of the Year” winner at the Surrey Heath Sports Awards 2017 held at the Camberley Theatre on 23rd October 2017. Well done Ollie and all of our Chobham Rugby finalists. Chobham Rugby’s Hugh Scott won the Outstanding Service to Sport Award and Mike O’Regan won the Disability Sports Award. Well deserved both, we couldn’t be more proud of you and of all the Chobham Rugby finalists. At the recent Surrey Rugby Annual Dinner and Awards evening; held at Sandown Race Course, Chobham Rugby received no less than four of the awards presented by Sean Fitzpatrick: Minis Chairman Ian Woodley and the Chobham Minis team were thrilled to be named Club of the Year at the Woking Sports Awards 2016. Ollie Wickes and Izzy Fisher were proud to be nominated and receive a commendation from the RFU for their work as Young Rugby Ambassadors at the Awards Ceremony in Twickenham. Well done! For his efforts both on and off the Touch Rugby pitches at Chobham, Steve Cross was proud to collect an RFU President’s Honourable Mention Award for Player Recruitment on 31st May. Congratulations from all at Chobham! Chobham Rugby Club were nominated for an RFU Presidents Award for the work we’ve done and success we’ve had in transitioning young players in to senior rugby – ‘The Devs’! Last season 60% of Chobham First team players started their Rugby career in the minis and juniors at Chobham. Every week an average of 28% of the players who play senior rugby for Chobham are under 20! This was recognised today at Twickenham where we given ‘highly commended’ in the player retention category. Jamie Ross-Knight and Vince Kerr represented Chobham at the awards in Twickenham. Liam Cranford accepted the Surrey Rugby Club Development award and said: “Thank you to all that have helped with the club and community development over the past 4 years and special thank you to Ollie Fester Smith for his contribution over the past two years and with the introduction of Callum Edwards in September the community team is going from strength to strength!’

After one of the most successful seasons in the club’s history which saw Chobham’s 1st XV secure a league and cup double, this tremendous achievement has now been recognised more widely. At the annual Surrey Heath Sports Awards, Chobham were awarded the prestigious 2013 Team of the Year Award at a ceremony held at Camberley Theatre.

Head Coach Ryan Gregory, who together with his assistant coach Tony Paul has overseen the transformation of the team, was also short listed for the coach of the year award. Director of Rugby Nigel Guy was present at the event to accept the award on behalf of the club and said “It is tremendous that our success is being appreciated by the local community and credit goes to everybody associated with the team both on and off the field. Under Ryan and Tony’s leadership we continue to go from strength to strength and now sit proudly and unbeaten at the top of London 1 South”.