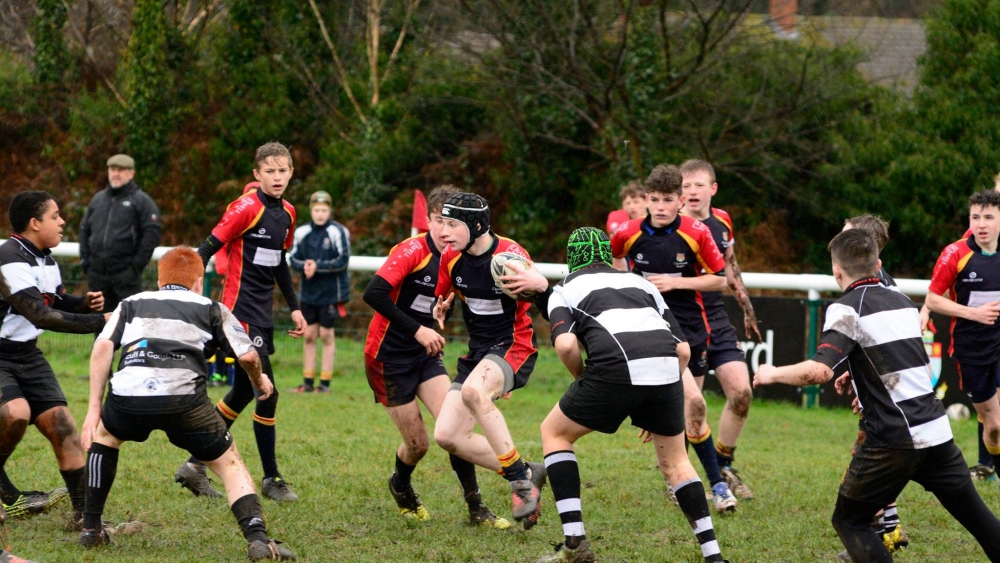 Match Report from Doug Mayger : Chobham U14s kicked off 2017 with a home match in the first round of the Waterfall Cup. Sutton&Epsom were the visitors, the previous meeting dating back to the days of tag. The game kicked off in pretty wet conditions threatening to make handling difficult for both sides.

The Chobham defence was strong from the off as Sutton failed to make ground from the kick-off and Callum made an early steal. Defence was quickly turned to attack on the left side but the handling wasn’t quite dialled in as the ball was spilled inn a promising position.

Territory was soon turned into points from another turnover, with Charlie firing out a wide pass to Adam on the wing to gather and break the deadlock. This opening score seemed to be the cue for Chobham to play simple low risk rugby that their opponents couldn’t match. With Sutton having to kick the ball back to Chobham after each score they had little opportunity to pressure the Chobham line.

The second try came from Chris ripping the ball in the centre, offloading for Reece to scamper home in the corner. From the restart a break took play immediately to the Sutton 25, George darted through the smallest of gaps only to be hauled down 5 yards short, but a couple of passes later and Harry was able to scrap his way through the last line of defence to add another try.

The restart again gave Chobham an immediate scoring opportunity, Tommy setting up in midfield and straightforward hands and a clean pair of heels from Jack rounded the Sutton defence to score under the posts. To their credit Sutton kept battling away but more scores were to come before half-time with Connor getting a pair, the first from a chip and chase which caught the visitors too flat. The second came from another long kick leaving the fullback isolated and a turnover created the opportunity for the try.

The final score of the first half was a one man effort, Adam collected the restart and set off on a mazy run which was enough to beat the flagging defence for his second of the game.

The result was pretty much decided by half-time with Chobham well clear, but Sutton dug deep at the start of the second period, the ball being like a bar of soap from the kick and they were able to regain possession immediately. A driving maul took play to within 10 yards of the Chobham line and the home side infringed to concede an early penalty. With nothing to lose Sutton took a quick tap and pressed for a score. The defence held them up initially but Sutton managed to wriggle over and get on the scoreboard. Sutton had possession from the restart and kicked for territory, but Chris was alert and scooped up the ball before putting Connor into space. With space to run the defence couldn’t lay on hand on him and Chobham had their first score of the second half under the posts.

A penalty conceded in the Sutton half relieved more pressure and led to the first lineout of the match, ten minutes into the half. A loose pass in the Sutton backs put them in difficulty again and Reece added to the score, squeezing down the left touchline to score out wide.

The game continued to be played in the Sutton half with a period of kicks keeping them pinned back. Another clearing kick led to the third try of the half as it was returned with interest for Gideon to fly hack the bouncing ball and beat the defence to flop on the ball over the line. With time running out the forwards decided to get in on the act as Oli went on the charge, to be held up a couple of yards short of the line. A quick ruck and Harrison was on hand to finish the scoring with a dive into the corner.

The ref blew for full-time and Chobham were through to the next round with a convincing victory against a side that never gave up and kept working right to the last.