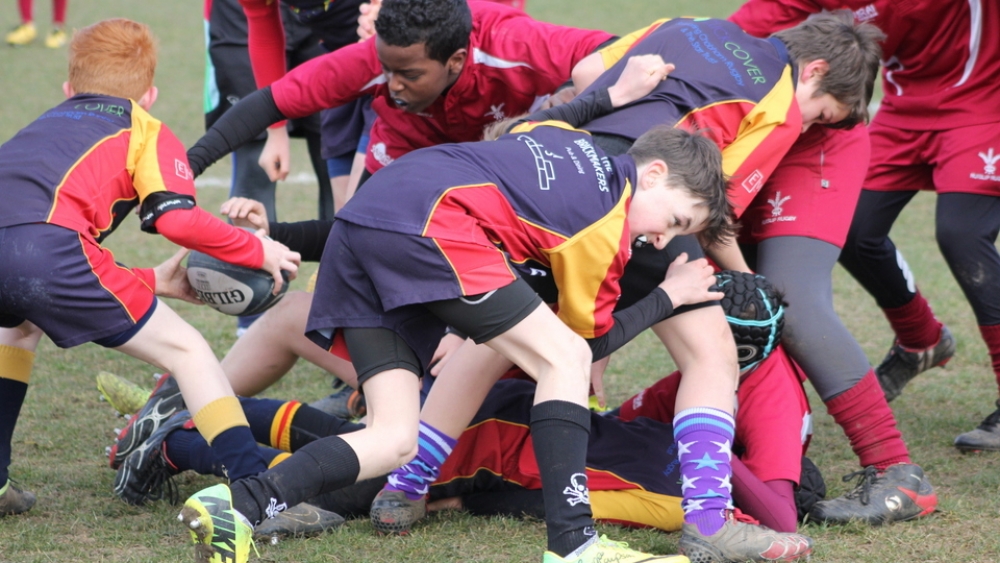 A massive defensive effort from Chobham U12 A’s who kept a clean sheet over five matches was the key to victory at the Harlequins Land Rover Cup.

On 8th March Chobham were matched with Esher, Ruislip and Rosslyn Park in their group at Farnham. Opening up against Esher it was soon clear that the boys would have the advantage at scrum time after being penalised for driving too far. Undeterred though they repelled what was a rare Esher attack and Teo won a turnover from which Harry almost got away down the blindside only to be bundled into touch. Working play steadily down field Chobham won a scrum around 15 yards out. From a great forward platform the ball was worked along the backline through several pairs of hands before Dougie spun out of a tackle and crossed for a 5-0 lead at the half. Into the second half and a long throw from Esher was gathered by Chobham and Chris made good ground to close on the Esher line where the ball was recycled only for a slight knock-on to halt the attack. The forwards however won the scrum and Esher were penalised for an early tackle at the base. A quick tap and pass found Danny, then Aaron who threw a miss pass out wide for George to get over and double the lead, the conversion making it 12-0.

From the restart Max gathered and set off on a charge up field. Chobham went through several phases moving the ball left and right before Esher conceded a penalty. A tap from Al to Dan on the hoof and finding a line through the Esher defence sealed the game with a third try and the conversion finished off the scoring at 19-0 to Chobham. The second match was against Ruislip who looked to carry more of a physical threat than Esher. Ruislip kicked off and Danny gathered and was ably supported by his forwards who set off on a driving maul up field. Max set off on another trademark break before being tackled close to the Ruislip line. An overthrown lineout gave the ball back to Chobham with Chris on the wing but the ball is held up short. From the scrum Max cut back on the blind side from fly-half and squeezed in for the first score.

Al safely caught the restart and with Oli in tow drove back into the Ruislip half. Then it was Connor’s turn to break forward before setting the ball back to keep the attack moving, but Ruislip held it up and won a scrum. The forwards again pinched it and Tommy attacked through the middle, before Danny jinked through the defence from the next scrum to increase the score to 14-0 on half-time. In the second half Ruislip actually had a couple of moments of possession as the boys honed their defensive skills driving back the Ruislip attacks with terrier like tackling forcing up the field without the ball. Eventually Ruislip conceded a penalty and t eh ball was smuggled back from a ruck for another sweeping passing move through Dan, Max and Tommy with a delayed pass to Aaron completed the scoring for a 21-0 final score.

The final group game was a step up in class against Rosslyn Park who had despatched Esher with ease. It proved to be a very physical encounter with no quarter asked or given. Rosslyn Park attacked the more fluently, using a cutback inside and then pass move all along the backline trying to create space. The Chobham defence was up to this however, and a good drift defence that looked like they’d worked on it all season kept Rosslyn Park at bay and allowed Hugh and Chris on the wings to stay on their man and make the tackles. Chobham had a couple of breaks into the Park half with Max picking up a loose ball and trying to create a chance. The second half started with Chobham playing a tighter game with Oli, Al, Marcus and Dan all prominent in the pick and go to gain yards. After one such attack Park had a lineout close to their line as time was running out. The defence held Park tight and won a scrum 5 yards out. With the scrum being uncontested due to a Park injury Harry was able to dance through the 9/10 channel and dot the ball down for a late lead. It was last play and Park kicked deep to put pressure on the Chobham defence, but Charlie was solid under the high ball and it was safely kicked halfway to Birdworld as time ran out and Chobham finished top of the group and top seeds after three wins and no tries conceded.

Their reward for being top seed was an immediate rematch against Park who were keen for revenge. After the injury in the first game they were down to 12 so Calum and Harvey generously agreed to provide cover and use their inside knowledge to good effect against Chob’.

If anything the second game was more physical than the first with play slowly moving from one end to the other as each team took it in turns to concede penalties as they grappled for the ascendancy. Teo and Aaron worked through a gap down the left but Park managed to steal it at the ruck and stop any try scoring chance. Park then worked upfield and from a quick penalty Dougie bravely made a tackle on the line and won a penalty back for a handoff. Late in the first half Charlie and Connor worked upfield round the fringes of the breakdown and forced a penalty. Oli went all out for it but was deemed to be held up over the line. Practice makes perfect they say and from the next scrum Oli bashes over and Chobham go into the break 7-0 up.

The second half carried on in the same vein as both teams slugged it out in midfield. Park tried to play the short game but Matthew and Hugh made all their tackles on the fringes and the game seemed set for stalemate. The rush defence in the backs was again in full flight and Marcus pounced on it to set up an attacked but counter rucking from Park stole it back. Time was almost up when Park won a penalty in midfield the ball was quickly worked wide left but a great smothering tackle from about half the Chob’ team forces the ball into touch. The ref obviously called last play as Connor caught the lineout and kicked for touch and the ball just squeaked into touch again after taking a lucky deflection. So, two games, two wins over Rosslyn Park and still nobody had breached the Chobham line. What would Farnham be able to do in the final?

Teo gathered the kick but Farnham stole it illegally at the ruck. Chobham continued with the quick tap and go plan and Max was able to gain ground. The game was developed in the same style as the previous two matches with strong defence from both sides keeping chances to a minimum. Farnham’s strong rucking game gave them the territory and possession advantage but the Chobham defence and tackling prevented any real scoring threat. Farnham managed one clean break towards the end of the first half but a tackle from Hugh kept them out initially before a second surge saw them to the line and a touchdown but luckily having knocked on in the process.

Into the second period and our old friend Louis went on a little darting run but again the defence held firm and Chobham’s advantage at the scrum, with both Calum and Harvey now restored to the dark blue ranks made sure any ball they had was under pressure. Chobham were now defending almost constantly and a long penalty kick pushed them back deep near their own line. From the throw Farnham moved right across the pitch but again super defence forced them out and the ref decided it was full-time. The whistle was met with silence from all parts as nobody appeared to know what should happen next. Eventually sudden death was agreed on as the competition needed a winner.

Farnham were offside from the kick but the quick penalty was spilled forwards as fatigue must surely have started to kick in. Farnham still had most possession and after several minutes had a scrum close in. The ball was moved to the centre who surged for the line but a superb try saving tackle brought him down and the ball was held up over the line and Chobham were awarded a clearing penalty kicked long and into the Farnham half. From a scrum given for a knock-on Chobham pinched the ball and the Farnham 9 was offside. Nothing came from the penalty as tiredness was noticeably taking hold and the ref opted to blow again for full-time as injuries were cropping up all over the place.

It was 0-0 then at full-time and neither side knew what was going to happen. After what must have been an age for the boys a decision was announced and Chobham had won the trophy through their rock solid defence as they had score 7 tries to nil and Farnham had scored 7 but conceded against Battersea in the semi.

So the boys are off to Twickenham for the Premiership final at the end of May for a great day out.

Special thanks must go to the coaching team of Matt Parker, Simon Parsons and Fed Petersen who marshalled the squad so well all day. They must all be as excited as the boys about the opportunity to be pitchside at rugby’s spiritual home…