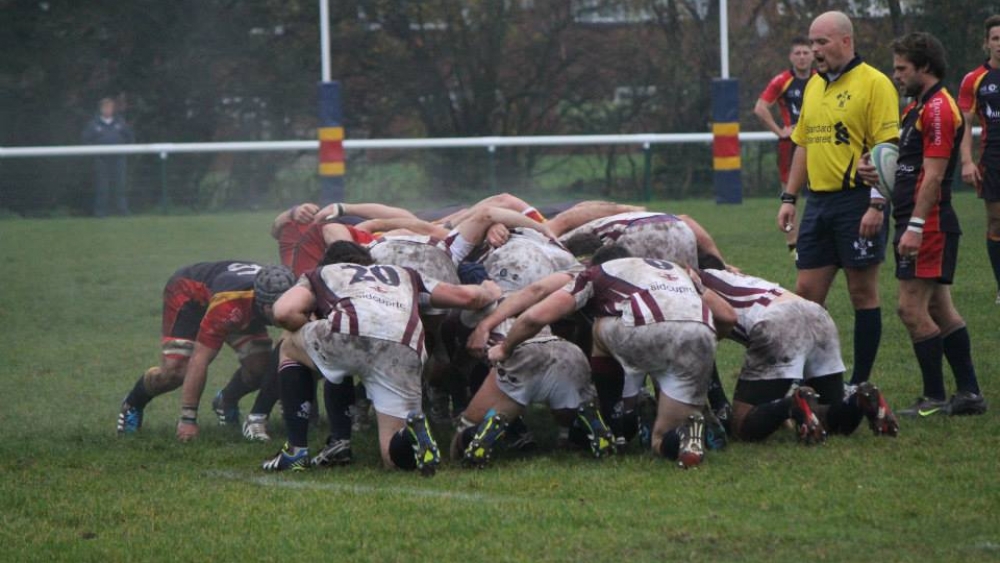 After a disappointing loss in a poor performance at Brighton last week, Chobham returned to action at Fowler’s Wells knowing that a victory against second placed Sidcup was vital to maintain their interest amongst the league’s leading pace setters. The coaching team of Ryan Gregory and Tony Paul had worked hard with the squad midweek particularly around intensity and physicality in both defence and attack after being second best in both areas down in Sussex. Improvement here and making sure that all chances were taken whether by hand or from the boot was the Chobham watch word on a damp, dull Saturday.  A number of changes were shown on the Chob team sheet with Sonny Kuwana making a welcome return from injury. Tom King came into the back row and Alec Thomson started at 15 allowing Harry Guy to take up the fly half berth with James Dunne switching to 13. 18 year old tyro Aaran Mawson made his first start of the season on the wing. Any gloom in the atmosphere though was removed by the many ladies in the crowd who had enjoyed a splendid lunch in their honour and with ladies’ touch rugby also being launched at the club, Chobham was certainly in touch with its feminine side! The home team started strongly having clearly followed the coaching’s teams instructions. Immediately putting Sidcup under pressure, Chob drew a penalty after 1 minute. Harry Guy stepped up and confidently knocked the ball over from 42 metres. Chobham 3 Sidcup 0. Sidcup responded strongly showing their quality and technique as they built up the phases through good ball retention, but strong and effective defence closed out any danger well short of the 22. On 5 minutes Chob increased their lead. Number 8 Ollie Smith picked up from the base of the scrum on the edge of the home 22 and with a wiggle and squirm broke free to unleash the flying Ulsterman Josh Devitt. A great step and a sway from Devitt left the Sidcup defence for dead and he ran in the 60 yards for the opening try. Guy added the extras. Chobham 10 Sidcup 0.  Both sides continued to press, each looking for the smallest opportunity but defences stood firm as the quality of rugby on display reached very high standards. On 23 minutes the impressive front row of the Evans twins and Tom Riley got the upper hand in a scrum and a penalty resulted which Guy assuredly converted. Chobham 13 Sidcup 0. Back came the men from Kent and a period of sustained pressure in the Chob half brought penalties and the visitors’ fly half James Cutler struck twice to narrow the deficit. Chobham 13 Sidcup 6. 32 minutes played and the game was approaching a pivotal stage. On 38 minutes Chob gained a penalty when a thumping tackle from Smith gained a turnover. With the omnipresent Ian Barnes urging the forwards on quality ball was produced and Barnes delivered a superbly weighted pass for the ghost like Devitt who appeared a full tilt from nowhere to scorch home for a wonderful team try. Guy added the extras. Chobham 20 Sidcup 6. Half Time. Gregory and his assistant Paul would have been delighted with the response from last week. Matching Sidcup’s energy and physicality had been achieved and the home team had looked more threatening in attack. Not letting Sidcup back in the game in the second half was vitally important.

The half started perfectly for the home team. After some aerial ping pong, Guy was given the opportunity to nudge Chob further ahead from the tee which he duly did. Chobham 23 Sidcup 6. Devitt then looked as though he would win a footrace following a kick through but the ball ran out of play. On 57 minutes though he secured his hat trick. A well worked opportunity from an attacking line out saw Devitt receive the ball at pace and he jagged through the Sidcup defence to touch down. Guy converted. Chobham 30 Sidcup 6.With 20 minutes left Sidcup raised their game looking at least for a losing bonus point. They threw the proverbial kitchen sink at Chob showing great ball retention and despite the defensive efforts of Euan Buckland and King who together with the front 5 and midfield tackled themselves to a standstill, Sidcup breached the home line on 66 minutes when wing Ashton Dean powered over and again on 78 minutes through number 8 John West. With Cutler adding 2, the scoreboard read, Chobham 30 Sidcup 18. Chob though had the last say when Guy slotted over his fourth penalty with the final score reading Chobham 33 Sidcup 18. Full time. This was an excellent contest from two sides keen to play a high tempo game. Chob showed just what they are capable of when they bring a controlled ferocity to their game and execute their opportunities well. It is clear that in this very competitive league this standard has to be maintained otherwise teams such as Brighton will turn you over. With next week off the coaches and the squad can reflect on their best performance of the season to date. The top of the league remains very congested and the group will be focussing on continued progress next time out away to league newcomers Charlton Park.