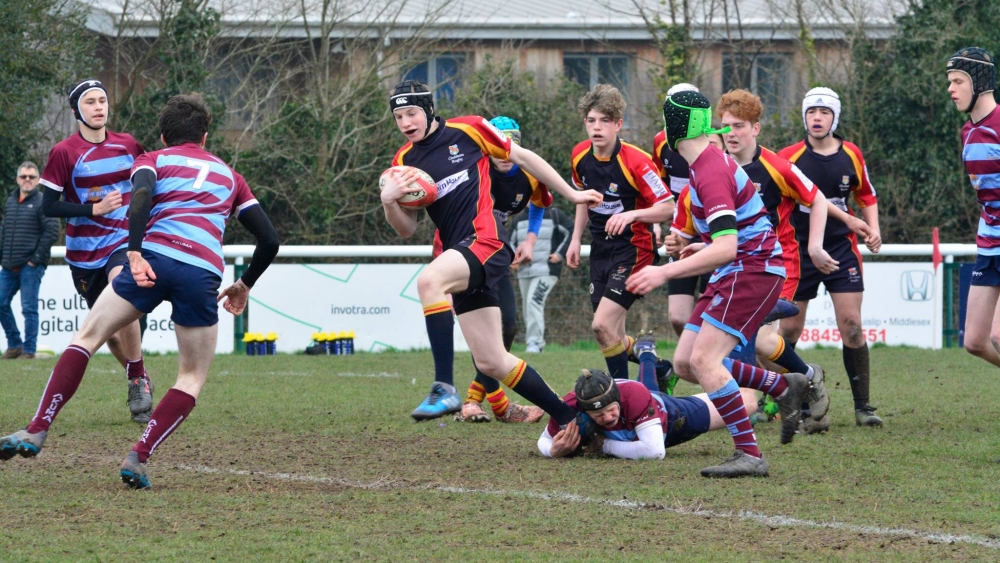 Sunday 25th March saw the Under 15s host Wimbledon As in a delayed Harlequins Cup pool match and Reeds Bs in a friendly fixture.

First up were the As who were trying to secure top spot in their group with a win, to see how Surrey would organise the knock-out stages from 5 pools.

Wimbledon kicked off and a good set was the platform for a deep kick into Wimbledon territory. With a bit of aerial ping pong Chob were able to get their short passing game moving nice and early to pin Wimbledon in their half. Unfortunately some loose play conceded possession and Wimbledon kicked back with interest to earn a scrum on the home 25. From the scrum Wimbledon tried to play expansively but midfield pressure forced the handling error, and Adam pounced on the loose ball, offloading to Fin as he was scragged. Doug then hacked downfield and the Dons were under the cosh once more with Chob having a lineout well inside the 25. A good set and driving maul went close before Billy was bundled into touch a couple of yards short. A penalty relieved the pressure and Wimbledon set about building some momentum themselves. A series of penalties against Chob took play right into the home 25 when another attacking move was stifled by aggressive line speed as the Wimbledon handling wasn’t quite on the mark. The loss of hooker Charlie to injury meant a positional shuffle as Callum stepped up to the middle of the front row. Chob continued to have the slight edge on territory but couldn’t create any clear chances as Wimbledon defended manfully. The home side’s best chance came from a penalty in the Dons 25. Rhys had returned a clearing kick to fullback giving the forwards a target to push Wimbledon back and go offside at the ruck. A simple tap to Reece who blasted a hole in the first up defence before Callum was held up over the line and Wimbledon were able to clear from the resulting scrum.

As the first half started to wind down Wimbledon were pinged and a good line kick set up another throw 10 yards out. Harrison, now in at hooker found MattN and the forwards shaped to drive before letting the backs have a go. A well-rehearsed move with Gideon looping Chris at 10 before a wide miss pass out to Tommy created a space. With Tommy getting the offload away as he was brought down Saxon had enough space to drive for the line and have the momentum to reach out for the line as the covering fullback made a last ditch challenge. Wimbledon had one brief chance to hit back before the whistle with the No.8 having a gallop from the base of a scrum but the defence held firm and went into the break with a 5-0 lead.

Wimbledon were now playing towards the houses and had the breeze at their backs but it was the home side that opened the stronger. The forwards held up a maul in Wimbledon territory and from the scrum a little ‘show and go’ from Chris got him behind the back line. Tommy was alert to the break and took a short pass to beat the final winger and round the fifteen for the second try which was converted for a 12 point lead within a couple of minutes of the restart.

With a two score advantage Chobham were able to play calmly while Wimbledon had to play the higher risk strategy and chase the game. Chobham held them relatively comfortably as the visitors had a spell with the majority of possession but didn’t really look like breaking their duck. Chob kept Wimbledon pinned back forcing them to kick away possession. One penalty clearance was kept in on the wing by Harry leaping salmon-like to palm it backwards but unfortunately when it was gathered Wimbledon were able to force Chob to brush the touchline. When Chob did have possession they worked the ball well around the fringes and made very few handling errors. The Wimbledon 8 was their main ball carrier but his gains were limited and Chob were able to turn the ball over a couple of times at the ruck and also hold up the Wimbledon maul. A Wimbledon scrum on halfway came out loose on the blind side and Connor at 6 was first to react. With a deft pick up he was into his stride down the touch line. The defence made the tackle 5 yards out but the pack were in support and won quick ball. There was a big overlap to the left but a high pass meant Chris had to check at 10. Undeterred he danced back towards the forwards and somehow found space to wriggle through and score the decisive try with the lead at 17-0.

With a couple of minutes to play Wimbledon continued to fight hard for what would be a consolation try but the blue wall held firm and they were pinned in their own 25. Chob’s front foot defence forced a turnover and Connor was on the ball again getting to within a couple of yards before Wimbledon conceded a penalty. A quick tap took the ball almost to the base of the left hand post before Callum had a dart to within a couple of feet. Dan then had his hands on the ball and was able to drive nice and low to get under the guard and score the bonus point try with the last play of the game. The conversion made it 24-0 and guaranteed top spot in the group with three wins from three. It was now the turn of the Bs to see what they could do against near rivals Reeds with a last game before the age group tour to Dublin in a couple of weeks.

The home side started brightly enough but a penalty gave Reeds the chance to hoof it downfield. They secured the line out and after four or five rucks were held up the line was breached and Reeds opened the scoring with a 7-0 lead.

Chob steadied the ship and looked too play themselves back in the game. Andy made a break up the right wing but was just held on to before he could cut free for the line. The play was broken up by a number of penalties at the breakdown against both sides before Reeds turned the ball over at a ruck and made a break through the Chob midfield. The covering tackle was made but the Reeds support was on hand to take the offload and double the lead to 14 unanswered points. A spilled restart gave Chob good field position immediately, and they were able to keep the pressure on as Reeds clearance missed touch and was gathered by Chob inn the attacking half. The home side worked down to the Reeds 25 where they were awarded a scrum. MattW made a break through the centres and TommyW was on hand to finish off the move to get the Bs on the scoreboard just before half-time with Sam A adding the conversion. The boys weren’t finished yet as first Andy and then Alfie carried hard into the Reeds defence. a quick tap penalty came left and reached Rhys who beat what looked like the entire Reeds backline and sprinted away to score, leaving two Reeds players injured having collided with each other. Big thanks here go to Hugh and later to Max who agreed to play for Reeds to keep them with a full complement of players. Having now closed the gap to just two points, at 12-14, Chob had their tails up. They kept Reeds on the back foot and having a half chance themselves as Harvey carried to within 5. Reeds were able to clear their lines but quickly conceded a penalty which was drilled back to within 15 yards of their line.

A safe catch got the forwards on the march and when they got to within a couple of yards out Harrison went for the line. He was held up just short but Saxon was able to go all the way and put Chob in the lead for the first time in the match at 17-14. So now Reeds had to try and come back having had a two try lead earlier in the match. They tried, but the Chobham defence was pretty firm and the forwards were able to punch holes around the ruck and keep the visitors away from the home line. With time almost up there was confusion in the Chob ranks when they elected to run from deep rather than kick clear and Reeds were awarded a penalty. Opting to keep the ball in hand they went down the line but a loose pass under pressure was grabbed by Ben and Chob were able to see out the clock for a narrow but well-earned 17-14 victory, very like the first meeting between the sides before Christmas.